Buffalo, N.Y., has spent the last seven years developing and polishing its new Green Code. This will be a development strategy based on the city’s comprehensive plan and plan for the future of Buffalo by focusing on four fundamental principles: fix the basics, build on assets, implement smart growth and embrace sustainability.

The Green Code will then translate these principles into a land use plan that will be used to guide the city’s physical development over the next 20 years and provide an update to the city’s 60-year-old zoning code.

According to information from Nadine Marrero, director of planning, “Buffalo is one of only three cities in the U.S. to toss out its antiquated zoning and land use codes. Our Green Code represents the best ideas, creates more modern development standards and preserves and builds upon Buffalo’s strengths as a great 21st century city that can compete head-to-head with any city in this country.”

The mayor’s office of strategic planning continues to oversee the development of the Green Code. This has included utilizing specific plans for waterfront and brownfield areas as well as creating a single, citywide urban renewal plan for Buffalo’s homestead program. 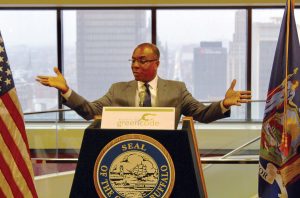 After years of revising the Green Code, Mayor Brown held a signing ceremony on Jan. 3, along with the Buffalo Common Council, to celebrate the approval of the unified development ordinance. (Photo provided by the city of Buffalo) 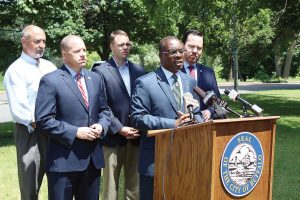 An infrastructure improvement project in South Buffalo was announced in July by Mayor Brown, State Senator Timothy Kennedy and South District Council Member Christopher Scanlon. This project will support growth and reinforce the goal of making a more vibrant community that is accessible to everyone. (Photo provided by the city of Buffalo)

The goal of the Green Code is to consider land use strategies from a plethora of planning initiatives that frame Buffalo’s development and combine it into a code. This framework is based on initiatives that express the community’s perspective of the city’s comprehensive plan.

Brownfield opportunity areas present recommendations for both land use and proper zoning after analysis of brownfield areas. These areas are former industrial or commercial sites in which potential environmental contamination may affect its future uses.

A local waterfront revitalization program works to propose development projects on both land and water along the coastal areas.

These three programs will then be combined into the land use plan that can be used as the physical development guide to grow the economy, strengthen the city neighborhoods and repair the environment.

The land use plan and all of its individual parts will then form Buffalo’s unified development ordinance. This ordinance is what will replace the city’s previous outdated zoning code and other regulations that control development and present new form-based standards on zoning, subdivision, signs and public realms.

Mayor Brown originally introduced the idea of the Green Code on Earth Day in 2010. It was officially filed with the Buffalo Common Council on Oct. 22, 2015. The draft of the generic environmental impact statement was then accepted by the common council on Feb. 16, 2016.

An updated Green Code was released by the mayor and the common council on Sept. 15, 2016. This included the revised urban development ordinance and a public review process, which took 10 months. Hundreds of submitted written comments, 20 public meetings and two public hearings were a part of this extensive process.

The latest version of the Green Code was scheduled for review by the common council on Dec. 20, 2016, along with the potential to repeal the existing zoning ordinances. After receiving the documents in October 2015, the common council adopted portions of the Green Code including the unified development ordinance, four brownfield opportunity plans and the land use plan on Dec. 27, 2016. In that time the code went through dozens of revisions with over 240 meetings and 6,500 residents participating.

Being the first zoning rewrite in over 60 years, the Green Code was designed to support and strengthen the city’s economy as well as promote mixed-use neighborhoods that provide residents with easily walkable streets. As Marrero shared, “The Green Code increases transparency and strengthens process … It is a living document meant to evolve in the decades ahead to meet the needs and desires of Buffalo residents.”

On Jan. 3, a special signing ceremony was held by Mayor Brown and the common council. The unified development ordinance became effective citywide on April 3.

Since April the greatest change has been removing minimum parking standards in an effort to move toward a more market-driven approach. What made a city great 60 years ago is no longer necessarily what makes a city great today. Marrero also relayed the information that “the Green Code embraces the future, implements the community’s vision for today and gets residents excited for smart growth.”