When the residents of Westerville, Ohio, voted to raise their income tax rate to 2 percent in order to fund some critical infrastructure improvements in 2008, they did so under a few conditions. They insisted that all streets in less than “good” condition be improved to “good” or “better” within 12 years and that they be kept abreast of the projects so that they could keep an eye on their investment.

It was a message the city took to heart, and in order to fulfill its end of the bargain, it created GoWesterville, a communication campaign designed to help residents and visitors stay apprised of roadway, infrastructure and capital improvement projects going on throughout the city.

“We wanted to be as transparent as possible in order to let them know were the construction is, how it is going, what it is costing as well as a timeline for completion,” Christa Dickey, community affairs administrator for Westerville, said. “We tell them everything.” 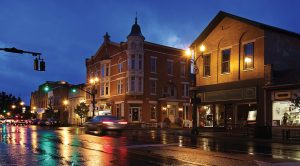 Westerville, Ohio, created GoWesterville to keep residents informed on where funds from a taxpayer approved raise in the income tax rate were going. The website shows what infrastructure improvements are underway and why they were selected. 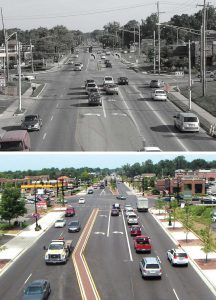 The intersection of State Street and Schrock Road is one infrastructure project that took precedence as the primary gateway into the city. A multi-year project, citizens were kept apprised to its progress via GoWesterville. Pictured is the before and after of this intersection. (Photos provided) 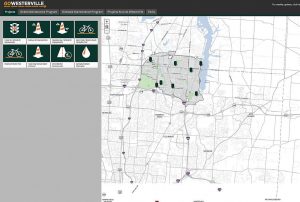 GoWesterville not only tells residents where the improvement projects are, but also what they are and how the city made the decision to pursue that particular project so that the public can understand the investments they are paying for. (Photo provided)

Westerville is not unlike any other city in the U.S. — long-term improvements require short-term inconveniences, and in order to help the public navigate those changes and celebrate those accomplishments, project manager and civic engineer Nate Lane came up with the idea of GoWesterville, an easy-to-use application that allows residents and visitors to see what is happening and where so that they can plan their routes accordingly. MurphyEpson, a Columbus-based public relations firm, then created the campaign for the City of Westerville.

However, GoWesterville is more than an interactive map. It is information that not every citizen always has. According to the city’s most recent survey, 88 percent of respondents indicated that they were satisfied or very satisfied with the overall quality of the city services. However, only 72 percent of the residents indicated satisfaction with infrastructure improvements, which told city leaders that they had more work to do.

In order to address those concerns, GoWesterville not only tells residents where the improvement projects are, but also what they are and how this decision was made so that the public can understand the investments they are paying for.

Improving a city’s transportation network is more than simply resurfacing roads or widening the streets. Long before the community sees a “cone zone,” city planners, engineers and others must first conceive of and design the suggested improvements. They have to take into consideration the traffic forecasts, the needs and input of all users as well as the latest safety and environmental regulations. Naturally, this takes time, expertise and, of course, funding.

Once it’s time to get moving, new questions and concerns arise. How do you keep traffic moving and construction crews safe? Will utilities have to be moved? Asphalt replaced? Traffic signals upgraded? Will curbs have to be repaired, replaced or updated to comply with the Americans with Disabilities Act? Not everything can be done all at once, and the city must prioritize its projects and stretch the public dollars as far as it can. Initiatives such as GoWesterville allow the public to know what the projects are and where they are happening as well as how they are organized and prioritized so that everyone can understand the long-term benefits of doing it this way.

“In 2008, we promised to make improvements to our southern gateway corridor at State Street and Schrock Road. It was 30 years old, and although it was the primary gateway into the city, it was often portrayed as ‘the forgotten part of town.’ It was a multi-year project that was completed this summer, and thanks to GoWesterville, we were able to communicate more about this important project and others through the portal as well as the city’s website, social media accounts, e-newsletters and eventually test alerts,” Dickey said. “We have tremendous reach through this portal. It allows us to communicate with the public in a thoughtful, organized way.”

Erica Charles, community affairs specialist for the city of Westerville, said ever since the GoWesterville portal was launched in April, the response from the public has been very positive.

“Residents seem to have a better understanding and warmer reception of the projects that are going on because they have easier access to the information. It’s gone so well; we are looking to expand it to include other types of projects such as parks and bike trails as well.”

As time goes on and the data comes in on how effective the app is, the city hopes to be able to share its success with other communities so that they can adopt it as a best practice in their own area. Dickey said they have already talked about GoWesterville in their professional organizations informally, and as the platform expands to include other projects that impact residents, she knows its popularity will continue to grow.

“I remember a time when there were no city pages on Facebook because no one had time to run them, but now everyone is communicating in new and exciting ways,” she said. “Platforms such as these are a great way to get the correct information into the hands of the people so that they can be informed about what their community is doing and how it will affect them.”

Some of the projects that are highlighted on the GoWesterville platform: