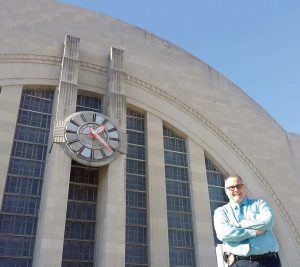 Since the local Amtrak station is in Union Terminal, and the building is also used for weddings and special events during evenings and weekends, his department is one of two that works around the clock. A minimum of two officers are in the building at all times; more when the museums are open and for special events.

“The officers are much more than security guards,” Middendorf said. “They have to be engaging while vigilant to something that is out of place; (and) be helpful and friendly to our guests and staff while maintaining order.

His law enforcement career began in 1983 with the Hamilton County Sheriff ’s Department. He worked as a jailer at the workhouse in Camp Washington. After putting himself through the police academy, he was hired by the Delhi Township Police Department and became the Drug Abuse Resistance Education officer, then a school resource officer. He was later nominated president of the Ohio School Resource Officers Association. He enjoyed a promotion to corporal, and retired after 30 years as the day-shift sergeant.

After retirement Middendorf worked at Western & Southern, where he had been previously employed part-time. There he helped create an armed security division. He learned of the opening for the position of director of security and public safety at Cincinnati Museum Center and has been at there since April 2014.

Middendorf was born and raised in Delhi Township, Ohio, where he coached track in the middle school and was a volunteer soccer coach. He was also very active in Scouting and received the Silver Beaver Award, given to adult leaders who have made an impact on the lives of youth through service to the council. In his free time he enjoys hiking and spending time at the beach.

His work with children was most rewarding to him, Middendorf said. First as a DARE and school resource officer, coach and Scout leader, and now at Cincinnati Museum Center, he continues working at a gathering place for kids.

“My most satisfying years as a police officer were those I spent in the schools. And now I can’t be any happier working at Cincinnati Museum Center. The building itself is a national landmark. It contains priceless artifacts, but the most priceless are the people who work here and the guests who visit every day.”