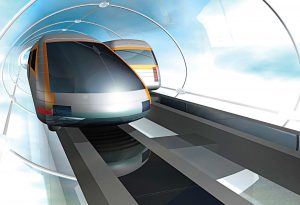 On one particular evening recently, I tried but failed to follow a sloppy “Contagion” story plot on prime time TV; failing miserably, I defaulted to checking the day’s top stories on my phone. Normally I’m good at scrolling past anything work-related after 10 p.m. That evening, though, one transportation headline begged for a click. It read “0 to 400 in mere seconds: Welcome to the age of hyperloop.”

Hyperloop … and I’ve barely codified the challenges public works will face during the second decade of the millennium should autonomous cars become a viable transportation option.

The next big thing is always in development, and transportation engineers are likely well aware that, in their case, it’s already being tested in the Mohave Desert. “It” is a futurist’s transportation dream that will forever change Americans’ expected level of service for getting from one location to another.

This high-speed land transportation option is in the works by several companies, including Hyperloop One, which performed that first real-world test of the concept. Similar to a train, it’s expected that hyperloop compartments will travel along a rail; but advanced magnetic levitation technology will enable them to reach speeds approaching 750 miles per hour. Holy G-forces, Batman.

According to USA Today, hyperloop pioneers say the technology — improved from that currently being used by maglev trains in Europe and Asia — can sustain very high speeds using precious little energy. They also assert that the propulsion process produces no carbon emissions, and will actually be comfortable for passengers because the acceleration will be gradual. I don’t know that I’m convinced 2 Gs could ever be comfortable; but I’m just as curious about what the development of a hyperloop system means for public works entities across the country. Among the issues it seems to raise are land rights, the status quo that rail and air travel providers will want to protect, and funding for the public infrastructure facilities that will service this new mode of transportation.

Hyperloop One CEO Rob Lloyd is quoted in the USA Today article as saying he thinks that if support for the idea continues, the company could be moving cargo across the country by 2019 and passengers by 2021. That seems ambitious; but even if he’s off by a few years, it still looks as though the hyperloop has great potential to significantly alter the U.S. transportation landscape.

In other recent news, the American Medical Association reported in April that life expectancy among the poorest residents of the U.S. — those in the lowest quartile — is, even in the 21st century, affected by where they live. But NextCity.org’s coverage of the new research noted optimistically that “… the pattern didn’t hold everywhere. In some cities, like New York, Miami and Birmingham, Ala., the poor have seen rising life expectancy this century and live nearly as long as their middle-class neighbors, suggesting that small-scale, local policies to improve public health can lengthen life spans, despite income inequality.” (nextcity.org/daily/ entry/poor-americans-life-expectancycities- healthy)

Those policies include expansion of preventive healthcare like vaccinations and mammograms, a portion of local taxes directed to hospital care for those who can’t pay, a countywide ban on smoking in restaurants and workplaces, and philanthropic campaigns to improve health, as well as wide access to social, educational and economic opportunity.

Just something to chew on as the volatile general election draws near.

In this issue of The Municipal, meanwhile, we’ll look at practices used by communities that are trying to create more responsible and responsive gas and electric utilities; and at the use of dynamic message road signs to improve motorist safety rates and decrease gridlock and driver frustration. We hope these and other features will help you form a vision for the community that could be, with your help and under your direction. Have a great summer.