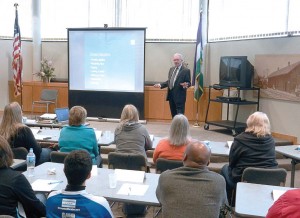 Both members of law enforcement and private-industry employees in gateway positions can protect others and de-escalate dangerous situations by recognizing indicators of extreme stress in an individual. Here, Zalud reviews some of those indicators during a seminar presentation. (Photo provided)

When police arrive at the scene of a call, they typically have little to go on. They may have received a report that an agitated individual has gotten increasingly out of sorts, but until they arrive on scene, there is no way for dispatch to evaluate if the person is merely stressed, suffering from a mental condition or is carrying a concealed weapon.

Rather than go in guns blazing, to borrow a line, and make a bad situation worse, Jim Zalud gives police officers, dispatch and front desk personnel “cause to pause” in order to read body language, deal with crisis and spot danger. He said people are amazed to realize the affect they can have on a potentially difficult or violent situation.

“They can be the lightning rod to trigger someone who may not be capable of cooperating in a traditional way, and this kind of negligence can cost municipalities a lot of money when a situation is mishandled.”

Zalud encourages review of the principles of customer service; he also introduces visual and video scenarios to enhance the understanding of service and perception, and offers methods with which to read people who are in a state of crisis. A list of Do’s and Don’ts for crisis situations, tips on the use of intuition in response to perceived danger, a basic understanding of reasonable suspicion and techniques with which to recognize concealed carry are also useful tools.

“People don’t realize that our words are only 13 percent of the way in which we communicate. The rest is dictated by our body language, our mannerisms, the sound of our voice, pitch and timbre, which sends a message louder than any spoken words,” he said. “It’s important for personnel to communicate effectively with those they come in contact with and to be able to understand the unspoken message that is being conveyed by individuals as well.”

We’ve all seen that person who has been transferred to four different departments in search of assistance. By the time they reach that fifth office, they are stressed out, operating on a short fuse and ready to explode. Although they are not inherently dangerous, by taking a moment to sympathize with their frustration, rather than reacting to it, personnel can diffuse a bad situation instead of aggravating it.

“It’s such a small thing really, but it makes a big difference,” Zalud said. “When people go to Disney World, they don’t talk about how great the rides were, but how clean the place is and how kind and courteous the staff was to them. When you exhibit good customer service, it can really add up to a more positive experience.”

Another problem facing law enforcement and front desk personnel is occasional inability to differentiate between a neurotypical individual and someone with a recognized medical condition such as autism or other behavioral health issue. When called to deal with someone who is stimming, unable to maintain eye contact or having trouble with verbal communication, officers might respond inappropriately if they are unfamiliar with behaviors that may be perfectly normal for someone on the spectrum. Zalud said they often come in expecting to confront a “madman” or “weirdo” and instead encounter an autistic mid-meltdown.

“If the individual is unarmed and they are having a meltdown, then let them have it. They aren’t going to hurt anybody: but startling them, grabbing them, trying to force them into behaving or even attempting to reason with them is not going to work,” he said. “Treating them like a criminal is not helpful. The best thing an officer or front desk person can do is to call 911, get an EMT on the scene, clear the room and lower their volume in order to keep the individual as calm as possible.”

Of course, not every situation is benign. Zalud recognizes that law enforcement officers and front desk personnel may find themselves facing a truly dangerous person at some point. Like the other situations, there are hints that can help them spot a person who may pose a real threat to a place of business. They may be wearing loose clothing or carrying a mysterious backpack or package away from their body, as if they don’t want something explosive or dangerous near them. They may be sweating, have dilated pupils, tight muscles and their breathing pattern may be different.

Those who are carrying a weapon actually walk differently in order to accommodate the weight of the weapon. They may also absently pat the area where they are holding the weapon as if to make sure it is still there and secure.

“There are a whole host of behaviors that they will go into before they are about to open fire, and it’s important for personnel to be aware of these behaviors, have a code red protocol in place and learn to trust their intuition when something doesn’t feel right,” he said.

Zalud said he tries to help law enforcement and other personnel put better customer service practices in place and to be aware of the what is truly a dangerous situation and what is not in order to have the best possible outcome.

“Education plus experience results in a better intuition, and when you have that gut feeling, you have to act on it. Human beings are the only animals that second guess themselves with logic, and sometimes you can’t afford to do that.”