Whether by land or by sea — and sometimes by air — law enforcement agencies are on the job protecting the public and upholding the laws. Many cities across the U.S. also have coastal boundaries as well, and to patrol those they count on marine or harbor units that are part of their municipal departments.

When it comes to enforcing the law on the water, several agencies could be involved in a given situation. Water patrol could be the jurisdiction of a municipality, county sheriff’s department, state department of natural resources or the U.S. Coast Guard. Whose responsibility the waters are varies from place to place, and that decision is usually made by local ordinance and state statute.

The USCG is authorized to go anywhere on the water it’s needed, but generally doesn’t enter into local waters unless asked. CWO3 Chad Saylor, USCG media relations, said, “The Coast Guard has many agreements with municipalities all over the country; however, those agreements are specific to the part of the country — there’s no one size fits all.”

According to a USCG publication on jurisdiction, the sovereignty of a state extends beyond its land and internal waters to territorial seas. In the ‘territorial seas’ a state may exercise the control necessary to prevent passage that is not innocent and punish violators of the laws and directives of the state committed on, over or beneath the territorial sea.

Territorial seas and contiguous zones are generally within the belt of the nautical sea, which extends at most 12 nautical miles from the baseline. This is drawn from the 1982 Law of the Sea convention, which is “customary law whether a state is party to it or not.”

Based on this law, if a city cannot support a marine patrol, the responsibility next falls on the county, then the state’s DNR and finally the Coast Guard. But “the Coast Guard will always have a 24/7 presence on the water that is not contingent upon the presence of local or state assets,” Saylor said.

There is also the “right of hot pursuit” on the sea just as there is on land, as long as the infraction occurred while in the city’s jurisdiction and the pursuit is continuous.

Harbor Springs is a resort community in Emmett County that lies within a sheltered bay on the north shore of Little Traverse Bay on Lake Michigan. According to the 2010 census, the population is 1,194, but in summertime that population significantly swells, according to Police Chief Dan Branson.

Branson has been with the department 19 years and said the city’s marine patrol began with volunteers.

“My understanding is it began as a volunteer organization to help with safety issues out in the harbor and has evolved to staffed positions with certified police officers,” he said.

In the state of Michigan, most of the money collected and distributed to marine patrols goes to sheriff’s departments because most of the inland lakes are in the county.

Branson said Harbor Springs is unique because its coast is on Lake Michigan. He explained that a Harbor Commission was formed to serve the city and adjoining townships as an advisory board to the city council: It’s the Harbor Commission that makes the rules and regulations for the marina and waterfront and also operates the city-owned marina. The Harbor Commission was instrumental in establishing the marine patrol to help patrol, educate and enforce the city’s ordinances and state laws.

Officers are all certified and authorized for land or water, Branson said, but his longest-serving marine patrolman, Dean Cosens, is strictly certified in marine patrol. Part of the training the marine officers receive includes operating boats and safety on the water. 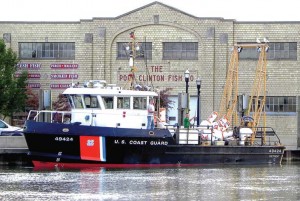 Their jurisdiction extends a half-mile out from the coast, but “If a 911 distress call comes in and it’s 2, 3 or 4 miles out and we’re the only patrol around, we will respond,” he said.

The Harbor Springs Police Department has five full-time officers and two or three extra officers in the busy summer season. There are three marinas, 75 to 100 moorings and all sorts of vessels coming in and out of the harbor.

“The city has a launch ramp where everyone puts in — it’s the only one in the area. A business in town rents kayaks and paddle boats and an organization runs a sailing school for sailboats, so there’s lots of congestion on the water.”

Because of that, most of the issues his officers deal with are more safety-related than crime-related.

“A lot of our work is making sure everything goes smoothly out there; enforcing ‘slow, no wake’ rules,” he said.

His marine patrol also enforces state laws regarding life vests and age requirements for operating a boat. Branson said he believed Detroit and Port Huron also had marine patrols but “a lot of cities opt out and let the sheriff or Coast Guard (handle) it.” 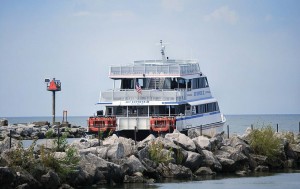 The Jet Express II, one of four Jet Express Catamaran Ferries, leaves the city of Port Clinton enroute to Put In Bay, Ohio. Heavy traffic on the water route necessitates a law enforcement that is provided primarily by the city and supplemented with U.S. Coast Guard response. (Photo provided)

Port Clinton is another small community, located in Ottawa County, Ohio, on the shores of Lake Erie. Its nickname is the “Walleye Capital of the World,” and the city is in close proximity to vacation destinations such as Put in Bay, Cedar Point Amusement Park in Sandusky and the Lake Erie Islands.

Everybody on the unit had to attend Marine Patrol Officer’s School, put on by the Ohio Department of Natural Resources Division of Watercraft. There they received training in the operation of the marine unit, watercraft laws, state of Ohio revised codes, patrol boat operations, vessel stops and boardings and inspecting vessels for safety equipment.

Port Clinton has 23 officers, including reserves. Of the 23, 18 are marine certified. Officers choose whether they want to be part of the marine unit. “Most find it interesting,” Fuiava said.

Port Clinton’s marine unit is supported in large part by grants. An annual Marine Patrol Assistance Grant from the Ohio DNR Division of Watercraft is a 25 percent city matching grant.

“It gives us the money to enforce watercraft laws within our jurisdiction,” Fuiava said,

That jurisdiction extends two miles out onto Lake Erie and the city limits to the east and west. Typical violations are wake violations, sticker and registration violations, reckless operation of a vessel or operating a vehicle impaired.

Another grant issued by the federal government goes to the counties, and through a Northern Borders Initiative is shared with municipalities that have marine patrols to help patrol along the U.S. and Canadian borders looking for all types of illegal transport of people, drugs or weapons.

According to Fuiava the harbor patrol could enforce the law in areas such as the Davis Besse Nuclear Power Plant, ferry terminals, state parks and marinas and other areas within Ottawa County’s jurisdiction. It responds to emergencies as part of a mutual aid agreement.

Normal patrols are two-men crews. When called out on an emergency three-men crews will respond, usually in as little as five to 10 minutes. Regarding boat maintenance, much like at Harbor Springs, the vessels are sent out to a local marina. Fuiava and his assistant schedule all maintenance.

They also have to maintain buoys, painting, repairing and placing each in the water each season and bringing them in for storage in the fall, one of many activities with which the USCG assists. There are swimming area buoys; no-wake buoys, which are placed up and down the river; and danger buoys, which are put out by a pile of rocks in the water, for example. With the abundance of zebra mussels in the lake, it takes time to clean the buoys and replace their decals.

Safety issues make up the majority of Port Clinton’s shifts as well. If an officer spots a safety violation, he or she will stop and look over the safety equipment and issue a decal that the vessel’s been inspected. Fuiava said laws for watercraft have changed, and officers now have to have probable cause to stop and inspect a vessel. In Ohio boaters are allowed to drink on their boats, so they can have open containers: but they’re not allowed to operate the vehicles while intoxicated.

“We gather all the marine law enforcement boats, and we’ll line up in the front of the yacht club; people hop onto the boats, and we assist them with laying wreaths in the river,” Fuiava said,

The Special Olympics Torch Run is a “pretty big thing” that all agencies, including the fire department with their rescue boat, participate in. They transport participants from Put in Bay for a parade on the river, and then they do a fire stream over the boats when they come in.

The Blessing of the Fleets is another big event at Put in Bay, but because it is so well attended and the boats are blessed individually, it takes time. Therefore, Fuiava initiated a blessing of the emergency and law enforcement fleets. It takes place in April at the city’s marina, where a local priest blesses the fleet. Then they attend the bigger event.

When it comes to events, Fuiava said, “I try to bring in all the agencies and get them involved. It gets the message out to the public that (these are) the assets we have, and they can see this is what their tax dollars are doing.”