Cities around the globe have been seeing the light ever so clearly the last few years not only in terms of residential illumination, but also as a way of creatively and proudly highlighting buildings, bridges, monuments and landmarks. Lower cost and energy savings shine in these efforts.

The buzzword that has been shaping the industry recently is LED, with a nod of thanks to the humble, incandescent bulb of Thomas Alva Edison’s day that launched it all.

Eventually set to replace incandescent bulbs and CFLs, LED bulbs are working their way up to wider use. They’re not quite there yet because of the cost, which is lessening as issues resolve, and due to early LED bulbs having a narrow light. One plus for the contemporary LED is that it lasts 25 times longer than an incandescent bulb and saves energy.

“There are a growing number of cities worldwide that are transitioning to LED lighting,” said Jim Crockett, editorial director of Architectural SSL magazine.

“Look at Cree’s website for abundant case studies; Philips Color Kinetics has done hundreds of projects, including the Channel Center Garage in Boston and the Bay Bridge in San Francisco. These are just a very few of the numerous giants in the illumination arena and their increasing futuristic innovations.”

Want to keep insects at bay? Just tune the colors on your LED lamp. Scientists conducted studies that were published in the March 26 issue of Popular Science, and they are continuing their research so that humans can use a form of high-tech lighting at night without attracting insects. That would be a big plus, particularly if you’ve ever looked up at a parking lot light on a hot midsummer’s night and were struck by the uncanny sight that resembled a blizzard in August. Those were not, um, snowflakes … 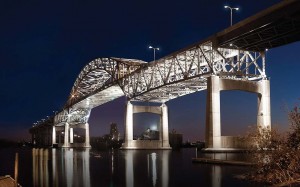 The Blatnik Bridge between Wisconsin and Minnesota features luminaires that can be individually addressed and dimmed, on the 7,975 feet long and nearly 120 feet high structure. (Photo provided)

The Blatnik Bridge, which spans the St. Louis Bay between Wisconsin and Minnesota, was constructed more than 50 years ago, but in 2012 the lighting had begun to cause problems. A more updated system was needed.

The question was how to provide a cost-effective, modern system, where each luminaire could be individually addressed and dimmed, on a bridge that is 7,975 feet long and nearly 120 feet high. Lumentalk technology enabled digital lighting control over existing AC power lines was the answer.

A stunning display of illumination is the St. Augustin Church in Saint-Augustin-de-Desmaures, Quebec, Canada. The lighting design was by Urbalum Signature Lumière, and there is an excellent video of this church and the diff erent facades the lighting shows posted at www.lumenpulse.com/en.

At Ripley’s Aquarium of Canada, in Toronto, Ontario, jellyfish tanks were fitted with color-changing luminaires that fade from day to night in a natural manner, helping marine animals to better adjust. (Photo provided)

At Ripley’s Aquarium of Canada, designers Mulvey + Banani International and B + H Architects deviated from traditional lighting and chose an LED lighting system that bypassed maintenance and operational issues. In the past, North American aquariums were lit with 150- and 250-watt metal halide fi xtures, which degrade with age, resulting in more maintenance.

Ripley’s huge jellyfish tanks were fitted with Lumenfacade Color-Changing luminaires on dry niche compartments in the tanks’ side windows, with reflections changing in the shifting daylight.

The luminaires are completely dimmable so that different moods can be implemented, and they slowly fade from day to night, which helps the 16,000 marine animals better adjust. They also control algae growth.

With LED illumination there is no longer a need to change light bulbs above the tanks. If a foundation of metal halide lighting sources had been used, 100 bulbs would then have to have been removed.

Fort Wayne, Ind., boasts its own illuminated bridge, which was completed in 2012. The Dr. Martin Luther King Jr. bridge memorializes King with 704 LED light fixtures requiring 14,000 feet of electrical wire, allowing the implementation of different color patterns, such as red, white and blue lights for a patriotic occasion or red and green lights honoring the holidays or the native Tin Caps baseball team.

Nordic lighting design practice Ljusarkitektur created a lovely family place for extended hours of operation by allowing night skiing at Åre, Sweden, one of the world’s top ski resorts near the Arctic Circle. Turning a snowy nighttime into an enchanting experience based on legends of trolls and other folklore, the installation used 240 color-changing Lumenpulse luminaires, which increased the after-dark revenue of the resort.

The original lights of the historic Loltún Caves in Oxkutzcab, Mexico, were upgraded recently as part of a challenge to balance the needs of tourists and archeologists alike on the project. The early incandescent and HD lamps used a lot of energy and had to be changed frequently, according to the GPE Designs.

Replaced by color-changing luminaires in various sizes, the designer, in order to limit damage to the caves, avoided permanent installations to the rock. Instead, the long-lasting luminaires were mounted onto concrete bases, which had the ability to be moved for future events, exhibits or studies.