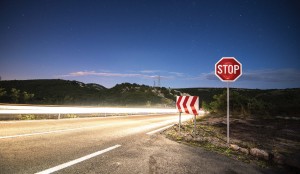 Signs should be detectable and legible at a distance during both the day and at night and remain unobscured by foliage.

This information is part of a case study performed by the American Traffic Safety Services Association in 2011. For a copy of the entire document, contact the ATSSA at (800) 272-8772 or www.atssa.com.

When inadequate or deficient signage conditions exist, drivers may make inappropriate responses, negatively impacting safety and increasing agency liability. The source of standards and warrants for the design and use of signs in the United States is the Manual on Uniform Traffic Control Devices. The mutcd establishes the shapes and colors of various signs to ensure uniformity and establish driver expectations. An effective traffic control device, such as a sign, should fulfill a need, command attention, convey a clear and simple meaning, command respect and give adequate time for a proper response.

These concepts should all be kept in mind when planning, designing, placing and maintaining signs. Signs should be detectable and legible at a distance during both the day and at night and remain unobscured by foliage. The needs of all drivers should be considered when designing signs, particularly those with reduced vision, such as older drivers. When a sign is no longer warranted or needed for a particular location, it should be removed.

In using signs to improve local road safety, the most important consideration is whether a sign is needed. A good place to begin is to look at the crash history of your roads. As noted in other parts of this document, good crash records can be a tremendous tool to not only see “hot spots” where multiple crashes have occurred, but also where there are trends, such as crashes occurring at multiple rural T-intersections. 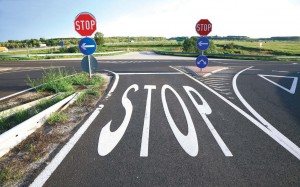 An effective traffic control device should fulfill a need, command attention, convey a clear and simple meaning, command respect and give adequate time for a proper response. These concepts should all be kept in mind when planning, designing, placing and maintaining signs.

Another place to look are areas where development is changing that may either cause increased traffic or more conflicts with pedestrians, cyclists and other drivers. Th e identification of sign needs or lack thereof may also come from maintenance/agency personnel, police or citizens based on observations of different changes in safety, operations, etc., at specific locations. Based on these observations, a consultation of the muted should be made to determine if a sign is needed and what signing options are available. Note that the use of a sign should be carefully considered to avoid oversigning in a location, which can result in driver information overload and possibly degraded safety. This requires consideration of prioritization of information needs to ensure they are correctly processed by a driver.

Frequent inspection and maintenance of existing signage is necessary to ensure it is still meeting its intended function. This includes determining if the sign is in good conditions and that an adequate level of retroreflectivity exists (as observed at night). Retroreflectivity needs are discussed in other sections of this document. While inspections are carried out by agency personnel, notification of sign issues by others, such as vandalism reported by police or citizens, can also be useful. Where deficiencies are confirmed to exist, repairs or upgrades should be made by trained maintenance or engineering personnel, who should also assure the signs are kept clean and their support structures in good condition. 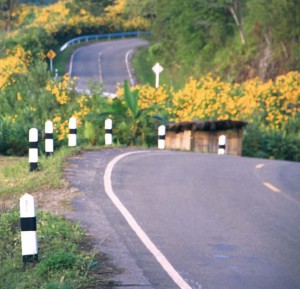 Good crash records can be a tremendous tool to not only see “hot spots” where multiple crashes have occurred, but also where there are trends, such as crashes occurring at multiple rural T-intersections.

The use of signs to make local roads safer does not need to be a complicated process. Mendocino County, Calif., established a simple program that demonstrated that additional signs on local roads can improve safety.

From 1992 through 1998, the county reduced crashes along its roads by 42.1 percent by simply adding and improving signage. The approach taken was basic, with a review of each road in the county made on a three year cycle to identify signing deficiencies. This included a combination of field reviews and a review of recent crashes that had occurred on each road. Over six years, a total of $79,260 was spent on this effort; when crash reductions were accounted for, the program produced a cost-benefit ratio of 299.0.

When examining the use of signs to improve safety, a local agency should consider both roadway segments and intersections. Along segments, geometric features such as curves should be examined to determine whether adequate signage is present to provide drivers with advanced warning. The appropriateness of existing signs, such as the posted speed limit, should also be reviewed with changes or removals made as needed. Intersections should also be reviewed for sign needs and existing adequacy. The FHWA indicates that signage should be used to provide drivers with advanced notice of the presence of an intersection and applied where patterns of right angle, rear end or turning crashes exist.

It should also be recognized that more or better signs are not an automatic panacea. In some cases, more extensive improvements (such as those highlighted in other parts of this document) may be needed to either prevent crashes or mitigate the impact if a driver does leave the roadway.

Signs are an important component of roadway safety, providing drivers with the guidance and information necessary to drive safely. The low cost of signs (both materials and installation) make them an ideal approach to improving safety along local roads, particularly if past crash history indicates correctable problems exist. Figures have shown that the use of signs results in crash reductions and produces positive cost-benefit ratios.

A simple approach can be employed to improve safety on local roads using signs. This can consist of a review of site conditions and crash data to identify locations or crash patterns where deficiencies exist or signs can address a safety issue. In using signs on local roads, a practitioner should take care to avoid overuse, which could potentially lead to drivers ignoring them and degrading safety.