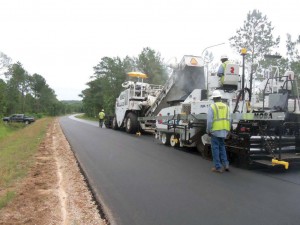 Noise, at the level produced by some materials used for the base of streets and highways, not only contributes to hearing loss but increases the stress level of both drivers and nearby residents. That’s one of the reasons why asphalt is a common and relatively quiet choice for road projects. (Photo provided)

Asphalt is the material of choice for engineers and motorists alike. According to Kent Hanson, director of engineering for the National Asphalt Pavement Association, 94 percent of the nation’s roads are surfaced with asphalt.

Quality of life is the name of the game, said Hanson. “In general, noise is something people find distracting.” Sometimes it can even be considered a nuisance or a health issue.

Put simply, peace and quiet is at a premium. Studies show that people are willing to pay more (for a home) that offers quiet surrounds, Hanson noted.

Traffic volumes, heavier trucks, faster cars, more intense urban development and noise from highways and streets all contribute to tire on pavement noise. Concrete isn’t ideal because “when you start hitting 40 mph, the noise starts to dominate,” Hanson said. In fact, he said it can be more than three decibels louder than asphalt. Long-term exposure to noise above 80 decibels can lead to hearing loss and permanent damage. This is when noise pollution becomes a municipality’s problem. Noise barriers and sound walls, while familiar sights, are not effective in fighting noise pollution, according to the Asphalt Pavement Alliance.

When a noise barrier wall is constructed, there is a significant noise drop immediately behind the wall. The problem is that buildings that are on hillsides, at intersections or driveways — anywhere there is an opening in the wall — will not benefit from noise reduction. In some cases where noise walls are built parallel to one another, noise reflections or echoes of the sound waves off the opposite wall can actually increase noise levels at a location near the highway.

With this infrastructure comes a significant cost to government. A study by the University of Louisville showed that the national average cost of noise barriers is $1.25 million per mile. There is a better solution, the APA asserts. The organization outlines a proactive approach on its website. 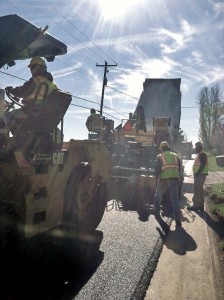 “There is no better way to reduce road noise than to treat the problem at its source. By paving roads and highways with asphalt, the noise generated by at the tire-pavement interface – noise that affects people as they go about their daily lives – can be significantly reduced. Paving with asphalt is actually more effective than building expensive, unsightly noise walls.”

From an engineering and budgetary perspective, asphalt is particularly attractive. “We can design pavement structure to last forever. All distresses are limited to the surfaces, which means you can simply mill off that surface and replace it with a new surface,” Hanson said, likening the process to painting one’s house. Only the top layer is removed and replaced during maintenance. This can be done quickly, even overnight, and it saves taxpayers money.

Both NAPA and the APA cite environmental benefits. According to Hanson, with asphalt all materials can be taken back to the plant, to be processed and applied toward the original use. This can save considerable money, he said, by reducing the use of raw material by as much as 40 percent. For example, some of the most common materials recycled into asphalt are rubber from used tires, glass, blast furnace slag and asphalt roofing shingles. In short, “there is a lot of potential for environmentally friendly materials.”

To put it into perspective, the APA asserts that “the asphalt industry reclaims about 65 million tons of its own product every year, and reuses or recycles about 99 percent of it. This makes it America’s number one recycler.”

The benefits of asphalt pavement extend far beyond the economic perks. The APA points to noise reduction, which it considers an environmental issue. Noise reductions of 3 to 10 dB(a) are common: Reducing noise by 3 dB(a) is about the same as doubling the distance from the road to the listener or reducing traffic volume by 50 percent. 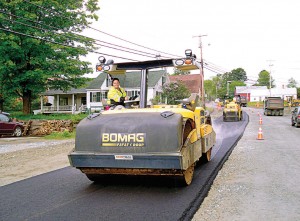 According the Asphalt Pavement Alliance, the industry reclaims about 65 million tons of its own product every year and reuses or recycles about 99 percent of it, making it America’s number one recycler. (Photo provided)

Independent studies also underline a correlation between asphalt and noise reduction. In the spring of 2013, the Virginia Department of Transportation found that use of quiet asphalt technology was able to reduce tire-on-pavement noise by a readily noticeable 5 decibels. In February 2014, researchers from Purdue University developed a model for predicting the noise level of an asphalt pavement design for the Minnesota Department of Transportation. The model is able to predict the on-board sound intensity level of various asphalt surface mixes to within 1.5 decibels. This model will help MNDOT estimate tire on pavement noise so that existing mix technology can be deployed as a noise reduction tool — minimizing noise at the source.

Hanson said the use of asphalt is generally accepted by governments, but there is room for improvement.

“In general, everyone thinks they know about asphalt pavement, but there’s a lot to learn.”