After you hash out and write up a plan for extreme winter events, the last step is to pursue buy-in from local officials. (Information provided)

Extreme winter weather events aren’t the bread and butter of street crews. Getting salt on the roads and the snow and ice off of them are the priorities: taking time to plan for a one in a million weather shot isn’t.

But not only does the weather go haywire everywhere at one time or another, these types of events seem to be happening with increased frequency lately. So expect that eventually it will happen to you and plan now to head off the unpleasant consequences, said the voices of experience who attended the spring APWA snow conference in Grand Rapids, Mich.

Whether you have received 3 feet of the white stuff at once or the snow you got two days ago has avalanched onto a traffic artery, the expectations of the public and city administration have to be met. Are the assumptions of what you’ll accomplish during extreme events set realistically?

Whether they are or not, there are significant implications to assuming that normal expectations will be set aside during extreme events. More than one mayor has lost his job because the public felt he botched snow and ice removal, noted Vaisala Inc. application expert Mark DeVries.

“People will stand for it the first day, but the second day they’re expecting it and by the third day they’re pissed and emailing the mayor’s office. And if he hears about it, you’re going to hear about it. If you had the capability to put plows on dump trucks and trash trucks and didn’t, if you had contractors with plows and didn’t have them ready, someone will pay the price.”

Even southern parts of the U.S. are susceptible to being caught unprepared for a winter storm, noted Brett Hodne, public works director for the city of West Des Moines, Iowa. A perfect example is the freezing rain that fell on Atlanta, Ga., in 2014 and then spent two days frozen to every street and interstate highway in the region.

“Extraordinary weather events are a matter of perspective. But no matter where you are, it’s going to happen sooner or later. Get a plan and manage your risk,” he advised. Risk control and communication are key components of a good extreme weather plan.

Many of the stories that came out of the winters of 2010–11 and 2013–14 involved communication shortcomings that left public works directors behind the eight ball as things skidded to a halt. Dan Schacher, district superintendent, Alaska Department of Transportation, came on board with the organization five years ago. Among his priorities was to write a snow operations plan that marshaled all available forces in the event of unusual weather, and it included local media.

Not a fan of social media himself, Schacher said he was eventually convinced by a local law enforcement public information officer that there are advantages not only to putting out your plan and your message proactively, but to include social media as one of the methods of diffusion.

“When you use social media, you are the one who controls the message. If we to allow other people to control that message, it won’t be the one we want,” he said.

St. Paul, Minn., assistant street maintenance engineer Matt Morreim noted that expectations and the media go hand in hand. Unlike calls to the police department, mayor or city councilman, social media also allows for an opportunity to respond quickly and easily to concerned individuals: heading off the public’s compulsion to call up the chain of command and cultivate support for unrealistic results. “And if you think things are going to go badly, there are ways to communicate that and lower the expectation,” he added. 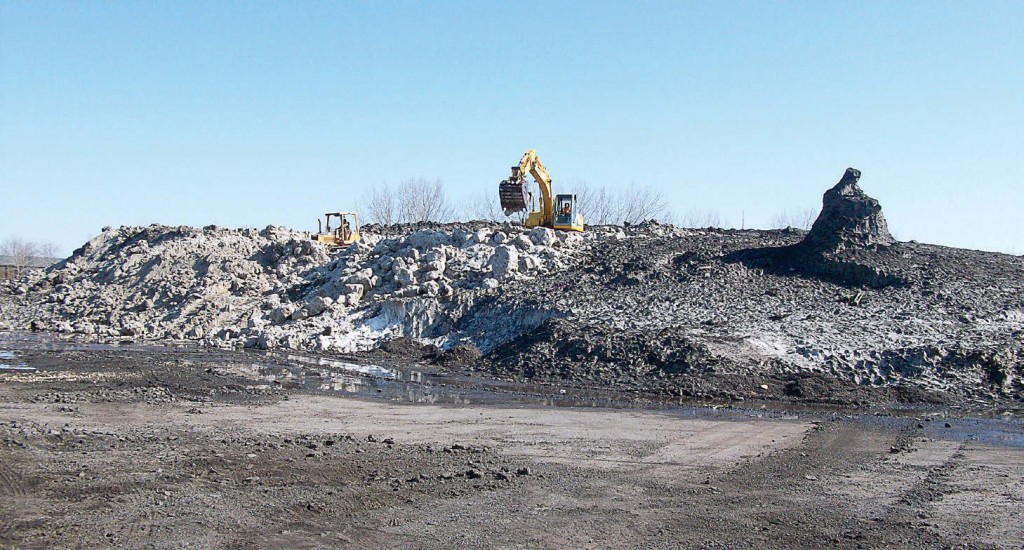 During the winter of 2010–11, the St. Paul, Minn., area received 60 inches of snow in a single month, exceeding storage capacity and forcing the city to deal with it in unconventional ways. Fortunately, there was plan in place for such emergencies. (Photo provided)

The plan should go one step further than you think it will need to.

Morreim referred to Minnesota’s winter efforts of four and a half years ago to elaborate on this point. That’s the year the city saw 60 inches of snow fall during December alone.

“We think we know how to do snow. But the sheer quantity… we were moving it for a month and half afterward. Then we ran out of room for storage.” Where to stockpile unusually large amounts of snow became an issue that had to be addressed with a plan.

Start by looking at other plans so you don’t have to reinvent the entire wheel, Morreim suggested. Th e Ontario Good Roads Association, for example, is even developing a Web application to create snow operations plans that should be available by early next year.

The Iowa DOT’s extreme weather plan includes buy-in from the public that happens via cameras that are mounted inside snow plows. The technique heads off public and administrative frustration with how an extreme winter event is being handled by letting public look at what crews are actually dealing with. It got 200,000 hits the first year and feedback was overwhelmingly positive, said Vaisala Inc. application expert Mark DeVries. (Shutterstock photo)

Once a snow plan is in place it’s usually very hard to get approval from city councils to update it, Morreim said — so make sure it’s what you want and covers all eventualities from the start. Asking for the governing body’s approval creates buy-in and has the added benefit of diverting the fault someone may try to lay at the street department’s doorstep.

“They may come back some time and ask ‘Why did you do that?’ And you’re answer will be, ‘Well, we did it because it’s in the plan — and you approved it.’”

West Des Moines public works participates in a citizen survey every other year that serves the dual purpose of heading off potential public discontent with storm fighting procedures and reminding the administration of what that plan is.

“That’s what I recommend,” Hodne said. “Get a plan, communicate the priorities to your council and publicly and then gauge the feedback — either by a poll, social media or there are apps that will do that.” Holding citizen meetings prior to finalizing the plan can be another method of creating support and buy-in, according to Morreim. “On an ongoing basis this is where social media really helped us gauge the level of satisfaction versus complaining.”