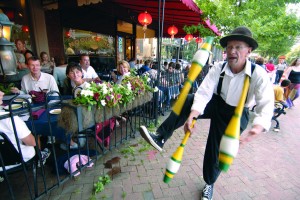 Among other names, Asheville, N.C., has been referred to as the “Freak Capital of the U.S.” Even seemingly unflattering monikers can develop a community’s sense of self and attract like-minded or appreciative visitors. (Photo provided)

Are people talking about your town or city — is it getting a reputation for being weird or different?

The things that make a community unique — avante-garde, artsy communities, Bohemian neighborhoods, infamous histories — are precisely the things that can attract more business and tourism.

The days of cookie-cutter communities, where one place looks just like another, may have lost their appeal. More people seek out unique places to live, work and play. Sometimes this focus happens organically, as in the case of Asheville, N.C. Other times it can be a more strategic focus, as it was in Sleepy Hollow, N.Y.

Asheville received national designation as the “coolest city” from Matador Network; “Freak Capital of the U.S.” from Rolling Stone magazine; and one of the “Best Outside Cities” from Outside Magazine. The April 2013 article in Rolling Stone described it as “a hipster college town full of Bohemian street buskers and hipster Hookah bars.”

Officials at the Asheville Convention and Visitor’s Bureau were asked how they felt about being named a freak capital and weird city. Dodie Stephenson, director of communications, responded, “We’re an eclectic, free-spirited mountain town, and we do embrace and own some of those titles that have been given to us.” 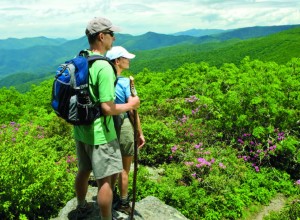 Even if visitors are initially attracted by Asheville’s supposed weirdness, the city then springs other pleasant surprises on them like breathtaking natural beauty, highly developed farm-to-table culinary experiences and a craft beer mecca. (Photo provided)

Marla Tambellini, vice president of marketing for the Asheville CVB, said her city’s focus on creativity and Bohemian culture was “born out of the legacy of independence because of its isolation in the mountains.” In the early 1900s the region’s craftsmanship arose out of practicality. Functional handmade items were crafted, but the beauty of those items was also recognized.

“Asheville is a very artistic community but also a beautiful natural resource region, which makes it a great place for people in urban areas to escape the mainstream,” Tambellini said. She added that city officials do embrace the authenticity and uniqueness that appeals to visitors.

“It’s not the same homogenization you’d find anywhere. We offer a unique culture and experience (visitors) find memorable.” The CVB promotes the city to those who are “interested in creative spirits, music, art, boutiques and galleries that are locally owned.” Officials embrace and perpetuate unique homegrown venues, restaurants and galleries.

Part of the organic revitalization of downtown Asheville is the “foodie culture” that has become part of Asheville’s draw.

“We have a rich history of locally owned ‘farm to table’ enterprises before it was called that,” she said.

Before farm to table was a culinary norm, the success of local people helped in establishing a benchmark, Tambellini explained. This encouraged more like-minded enterprises. She said what put the icing on the cake “or the knife in the steak, rather” is that they believe in the attributes of community.

“We embraced the farmers and created a business collaboration.” Restaurants help each other rather than compete with each other.

One example of that collaboration is a local restaurant and food guide available at the establishments. The food service community also applauds sustainable farming, to the point that when tobacco farmers started struggling, they worked with them to help them stay in business by creating and growing diverse crops. Unique tailgate markets cropped up, and other markets embraced buying local.

Asheville’s welcome mat to all — “freaks” included — combined with its natural beauty, appeals to a wide variety of the masses, Tambellini said. This helps in poor economic climates as well as one business props up another.

“It hasn’t been one predominant industry that’s helped in economic times.” The designations attributed to the city, like those mentioned before as well as others like “Beer City USA” and “Natural Beauty” — “Those accolades are marketing on their own and draw even more people to the area.”

Asheville has also grown from a natural beauty destination, 30 years ago built on the summer season and fall foliage, to a destination year-round. The Biltmore Estate offers Christmas holiday programs, and the food and beer culture is year-round.

“Particularly over the last four to five years we have weekend visitation year-round,” Tambellini said.

Esther Manheimer, mayor of Asheville, said in her state of the city address this year, “Find out who you are and do it on purpose.” Asheville’s thriving on that advice. 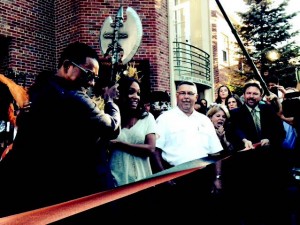 Stars of the “Sleepy Hollow” television show cut the ribbon to kick off the village’s Halloween season in September of last year. From left are Orlando Jones, who plays Captain Frank Irving in the series, and Lyndie Greenwood, who plays Jenny Mills. To their left are Police Chief Greg Camp and Village Administrator Anthony Giaccio. (Photo provided by Anthony Giaccio)

The village of Sleepy Hollow is an example of purposely playing to uniqueness. Formerly known as North Tarrytown, it owes it’s fame to the “Legend of Sleepy Hollow” — a short story written by Washington Irving that tells the tale of a love triangle and a headless horseman.

Village Administrator Anthony Giaccio explained the name change. The area originally was known as Sleepy Hollow — thus the title of Irving’s story — but in 1883 it was renamed the village of North Tarrytown. Changing the name back to Sleepy Hollow in 1996 was for two reasons, according to Giaccio’s understanding of the history.

The first was the closing of the GM plant, which was a major employer in the area. With that loss, the village was looking for another source of income and tourism was an end to that means. Part of the idea to focus on tourism was renaming the village.

“It made sense to take advantage of tourism and the history of the area,” Giaccio said. The other reason for renaming the village, something that was talked about for years, was to have its own identity from Tarrytown.

The high school had always been named Sleepy Hollow High and had the horseman as its mascot.

In the late 1790s Washington Irving went to visit his friend and relative, James Paulding, in Tarrytown. The two explored the area of Sleepy Hollow to hunt, fish and talk with local folks. The fruits of the visit were later immortalized in the book and contained some elements of truth.

The agricultural community later became a manufacturing center, producing steam-powered autos, shoes and leathers. Around the turn of the 20th century, it attracted millionaires like Anson Phillips, Ambrose Kingsland and John D. Rockefeller, who built beautiful mansions. Today the village has preserved much of its history and natural beauty and offers city convenience with small town charm and numerous outdoor activities with parks, forests, rivers, lakes, streams and trails.

But of course, the village derives most of its visitors and income during the Halloween season.

“Halloween tourism has exploded here,” Giaccio said. Because of the legend that’s always been true, but the 2013 television show “Sleepy Hollow” introduced the area to a new and wider audience. Some of the television show’s scenes were shot locally.

The village offers a haunted hayride and lots of family-friendly seasonal fun, but for those who want to be scared, Sleepy Hollow Cemetery, where Washington Irving, Elizabeth Arden, Andrew Carnegie and others are buried, offers a cemetery lantern tour and a monthlong, adult-scary haunted house. The Old Dutch Church, where the “real” headless horseman is said to be buried, offers tours and tales in the very spot mentioned in the legend.

Giaccio said they are working on building on that momentum to encourage visitors all year-round. There are the natural attractions to enjoy and the Hudson Lighthouses, which offers an interactive show “Pirates of the Hudson: The Greatest Story Never Told.”

But it is for those six to eight weeks that the quiet village gets intense. It’s hard to quantify the economic benefit precisely, because several nonprofits are among the biggest draws: But revenue from the cemetery tours supports the cemetery for the entire year.

Some of those restaurants and bars also take advantage of its weird history — there is a Headless Horseman Diner — and some run specials like pumpkin beer. But Giaccio said there is more that can be done.

“That is one of our goals, to see some more businesses get creative and take advantage of the history,” he said. The village’s ambulances, fire trucks and police cars now have depictions of the Headless Horseman chasing Ichabod Crane.

The second goal is to get more investors to see the opportunities and potential so they can develop more of the downtown vacant areas.

The old GM property has recently been sold to a company called Lighthouse Landing Ventures LLC and will be completely redeveloped with plans to include 11,077 housing units — townhouses and condos — retail, parkland, a river walk and hotel.

With that property soon to be back on the tax rolls, Giaccio looks forward to revitalizing the area known as the inner village.

“Tourism was the way to sustain the village until this happened — it’s been a way to keep the village afloat.”