Madelia, Minn., officials opted to decommission land previously used for wastewater treatment and develop it to expand the city’s pheasant hunting habitat and to bring the ponds to their highest and best use. (Photo by Bre McGee)

A few years ago, the small south central city of Madelia came up with the brilliant idea to trademark itself as the “Pheasant Capital of Minnesota.”

And why not? There are some 8,600 public access hunting acres within 20 miles of Madelia, and the area is home to a significant population of ring-necked pheasants. Madelia also has an active sportsman’s club and a chapter of the Pheasants Forever wildlife conservation organization. Additionally, the Minnesota Department of Natural Resources maintains a Farmland and Wildlife Population Research Station in Madelia, which, among other things, conducts an annual pheasant count for the state.

Madelia’s astute marketing strategy has led to one opportunity after another, starting with bagging the Governor’s Pheasant Hunting Opener in 2013. The event garnered loads of media attention for the tiny city of 2,400.

But that’s only part of the story. Madelia’s “Capital” status also influenced its decision to take land once used for wastewater treatment and restore it back to natural habitat and hunting grounds. This innovative project earned Madelia a 2014 City of Excellence Award from the League of Minnesota Cities.

The Madelia land that is today home to 40 acres of wild grasses, flowers, and habitat for pheasants, waterfowl, and deer, was once the site of Madelia’s wastewater treatment facility, a three-pond system for processing what’s sometimes casually called “humanure,” but most often referred to politely as “bio-solids.”

Madelia’s journey to transform its waste into a place of natural beauty began after the Minnesota Pollution Control Agency told Madelia to fix or decommission its 1970s-era ponds because they had started to leak. The Madelia City Council decided it was cost-prohibitive to repair the three huge (1,000 by 10,000 feet) ponds, and that decommissioning them was the next step.

Former Madelia City Administrator Dan Madsen saw the decommissioning process as an opportunity to expand the city’s pheasant hunting habitat and to bring the ponds to their highest and best use. The city council supported Madsen’s idea to empty the ponds and create a natural habitat accessible to young and disabled nature lovers and pheasant hunters.

“I knew we had come up with something really special and unique that could benefit everyone in the community,” said Madsen, who now works for the city of Rockford.

Engineering firms estimated a price tag of around $2.4 million for the project. But, the city knew it could do the work for less by hiring locally. All told, the net cost to the city for the habitat project was $850,000, saving the city about $1.5 million, and it took a little more than three years to complete.

How they did it

Madelia-based excavation and construction company BM Builders won the contract to empty the ponds and spread its contents on eligible farmland nearby.

Owner Bill McMullen said when the decommissioning process began in November 2009, the three clay and dirt-lined ponds were filled with runny bio-solids, each with a different depth, ranging from 16 inches to 5 feet. 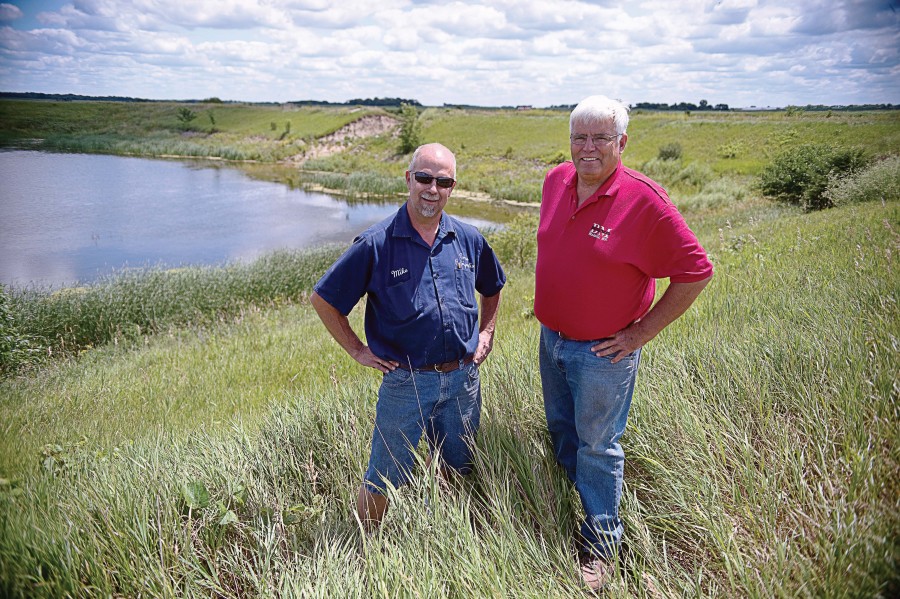 “So we went in with our dozer,” said McMullen. “It was like chasing gravy around with a fork.”
McMullen’s bulldozers pushed the watery sludge toward the corner of the pond. “Then we pushed it about 30 feet up on the left side, then the right side,” said McMullen, “until we had two rows piled as high as we could pile it.”

McMullen and his crew worked 14-hour days for a full week, just to get the sludge in the first pond in a windrow formation, like on a farm field. The sludge was left all winter to freeze and then all summer to dry out.

Ten months later, in fall 2010, the sludge was tested for heavy metals and for its nutrient value. The crew then removed all of the material and spread it over about 3,000 acres of eligible farm fields surrounding Madelia. The fertilizer was free to local farmers, saving them an average of $150 per acre in fertilizer costs.

The windrow, freezing, and thawing process played out two more times, and by November 2012, McMullen’s team had emptied all three ponds.

After receiving a “blessing” from the MPCA, McMullen’s team moved on to the final stage of the project, which was to till the pond soil and plant wildflowers and prairie grasses in two ponds. The third pond was left empty to fill with water and create a summer home for ducks, geese, and other waterfowl.

“It was a well-thought-out plan, and we learned tricks along the way with windrow to make it dry faster,” said Madelia Mayor Mike Grote. “Everything was flawless except for a couple of glitches with rainfall. But it’s like farming; you do the best you can.” 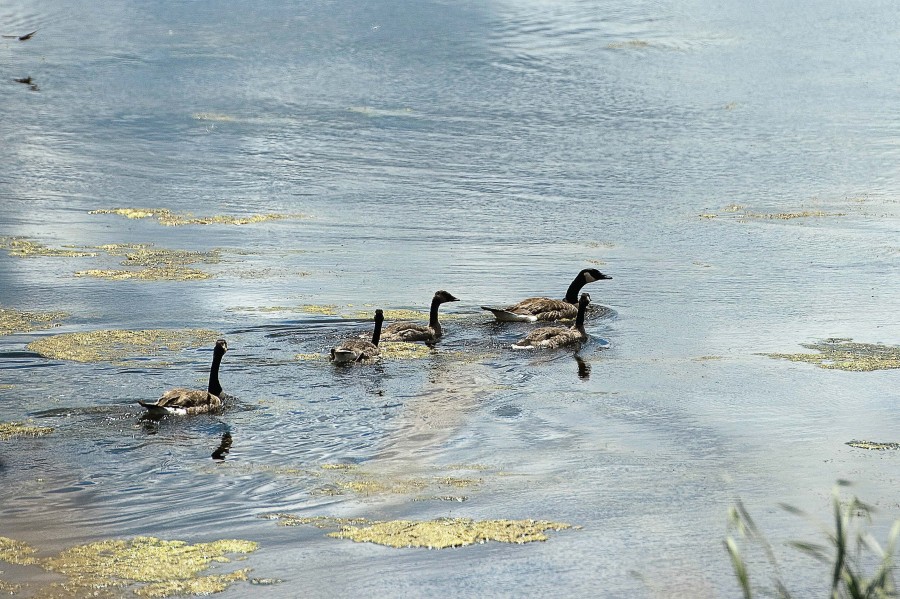 Madelia’s pond habitat continues to grow and thrive, and many people now enjoy the area. To make the habitat accessible to everyone, the city built four dirt ramps at the pond site. They allow anyone using a wheelchair or other motorized appliance to easily navigate the natural terrain.
“As much as people with disabilities refuse to be bound by the physical challenges they have, we didn’t want to be bound by lack of foresight on our end,” said Madsen. The ramps were a “fantastic opportunity to provide that option to hunt or shoot for those who might be in wheelchairs or have difficulty climbing or walking long distances.”

Disabled veterans with the Wounded Warriors Guide Service were the first to hunt the Madelia pond habitat during the governor’s hunting opener in 2013. Recently, the grounds attracted the attention of Hunting for Heroes, a national organization devoted to giving wounded police officers and their families the opportunity to hunt and bond with each other outdoors. Madelia will host eight Minnesota Hunting for Heroes families in October.

This project is “positive and cost-effective and may bring joy to somebody who’s not able to experience nature because of a limitation; it’s a win-win for everybody,” said Grote.

A model for other cities

About 400 cities across the state still use pond treatment systems, according to the mpca. Though just a handful have been decommissioned, chances are good that more ponds will be replaced as communities grow, and as the ponds near the end of their 20- to 30-year lifespan.

So far, Madelia is the only city in the state to transform its decommissioned bio-solid treatment ponds into a nature and hunting habitat. In addition to receiving the LMC award, the project earned Madelia a 2013 Local Government Innovation Award, and the mpca is touting the project as a model for other cities.

The MPCA’s Teri Roth specializes in wastewater treatment systems and worked with Madelia on decommissioning its pond system.

“The MPCA is pleased with the result,” said Roth. “It was a great idea and it fit the Madelia area well. Not many communities are willing to do what Madelia did because in the short term, they may see it as too expensive and tough to pull off. But Madelia committed itself, and now, it can show the benefits to the community in the long run. It’s impressive. It’s not easy.”

True, once fully decommissioned, Madelia could have simply leveled off the pond basins and left them for stormwater reclamation, or the city could have sold the land to farmers or developers.
“To return it all back to its natural state is fantastic,” said Dennis Malmgren, Madelia resident and president of the Watonwan County chapter of Pheasants Forever. “We need more places for deer, pheasants, and turkeys to go and sleep and live, where they have food and water, and just a place to hide out from predators. If we don’t have that, we won’t establish or keep a growing population of animals. I hope other cities, municipalities, and businesses do (projects like) this too.”