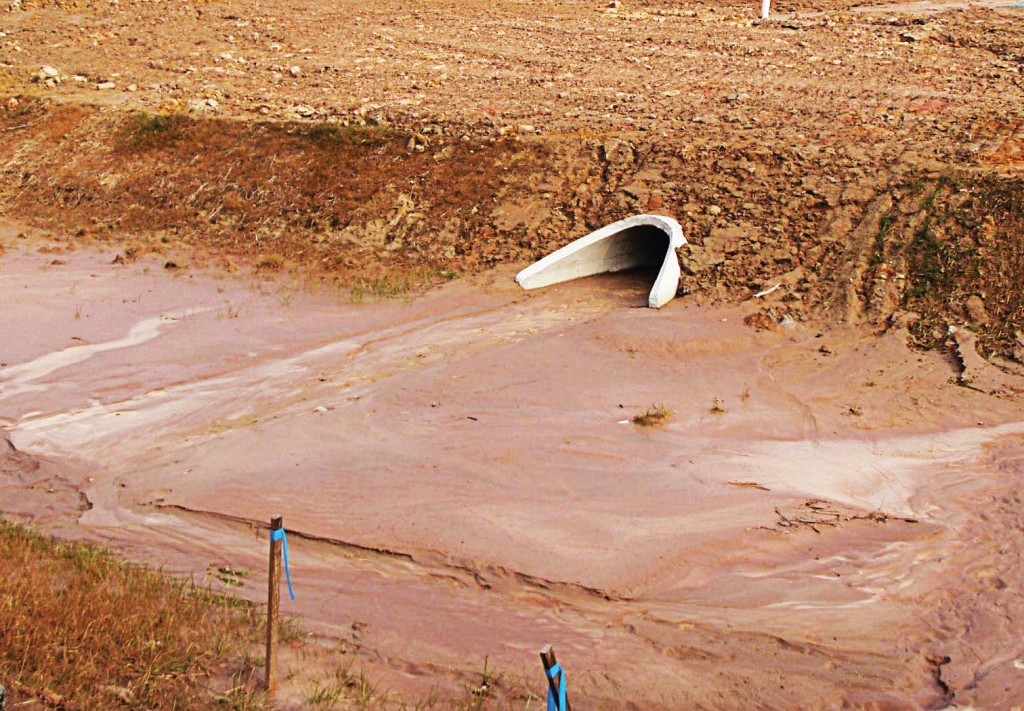 In built environments, soil compaction can mitigate the function of stormwater controls such as retention ponds.

Among the geomorphic and hydrologic considerations of stormwater planning, soil types and conditions are often neglected. But stormwater control measures that are implemented on insufficiently permeable soil can lead to flooding, insufficient plant growth and even failure of the stormwater measures.

By assessing the physical and chemical condition of the soil and understanding effective remediation methods, however, localized flooding and erosion caused by excessive runoff can be reduced. Improving soil permeability can maximize the water filtration capabilities of vegetated areas surrounding a bioretention pond or stormwater control system, reducing the volumes they have to handle.

One soil remediation method that has been under study by North Carolina State University involves deep tillage. NCSU’s findings on the use of deep tillage as a stormwater management practice were discussed by Dr. Richard McLaughlin during a November webinar facilitated by the International Erosion Control Association. The university’s work has centered on protecting lakes and streams by encouraging soils to be more receptive to stormwater infiltration.

Construction activities have a particularly negative impact on soil permeability, McLaughlin said. The construction process brings subsoil, which has few plant nutrients compared to topsoil, to the surface; then the weight of heavy machinery compacts the soil, making it even harder for young grasses and plants to establish and thrive.

At the site of one commercial development studied by NCSU students, the infiltration rate was 0 cm h-1 — not uncommon in this situation. “We had a lot of runoff coming off of these areas. Too much runoff: We want the stormwater to stay on site and filter into the soil,” he said. The options that were considered included the fallback position of hoping the situation remedies itself. Other options were:

While there is some evidence that compaction can remedy itself, the process may take many years. During that time period, vegetation struggles and develops only shallow roots, and runoff will be excessive. In northern climates, the annual freeze-thaw cycle can help; but only in the top few inches, McLaughlin said. Shallow tillage seems to provide better vegetation establishment, but may also create a hard pan at the depth of penetration, right below the tines.

The addition of topsoil yields better results, especially if it’s of high quality and is applied thickly. However, he said, if the compacted soil beneath it is not treated, infiltration will slow at that layer, creating a saturated surface soil that is more easily damaged and eroded. Using tillage or other means to de-compact the subsoil first is McLaughlin’s recommendation.

Core aeration is widely practiced, but the benefits related to infiltration are not clear. In fact, aeration with solid tines can actually increase compaction. The research available to date regarding the effect of hollow tines on infiltration has been mixed.

What’s critical is the soil moisture level. Core aeration can work if the soil is moist enough, but backfires if it’s too moist: The tines can smear the soil while exiting, which is when the compaction increases. Additionally, highly compacted soils will require an aerator larger than the average rental device, and even large equipment may not penetrate such soils. The pressure from the weight of even a small aerator can create a compacted zone at the bottom of the tine. 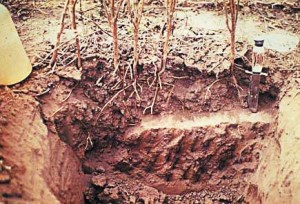 Example of a plow pan, with a zone of compaction visibly obvious just below the depth that a normal tillage blade usually reaches. North Carolina State University research has determined that deep tillage and the use of a spader are far more effective than regular tillage at eliminating plow pan.

Most of the research regarding tillage has been done in an agricultural setting, but the results are promising and applicable to municipal projects as well.

Tillage alone seems to improve filtration for a growing season, but the effect can be quickly lost after the crop is harvested. One problem with tillage is that right below where the implement is knifing through the soil, McLaughlin said, the soil is being compressed and a tillage pan can form. It is also difficult to get tillage equipment to penetrate the compacted subsoils. “Our experience has been that when it comes to compacted soils on a construction site, it’s very difficult to penetrate below the first few inches with any type of tiller.”

Tilling with a spader, which pushes out after reaching its maximum depth, seems to solve the tillage pan problem and may provide a good alternative tillage method, even though it’s slower than other methods and produces large soil clods. 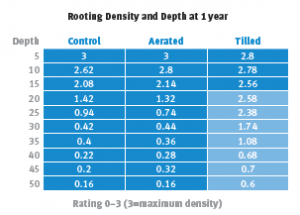 Three years of measurements at three North Carolina State University test plot sites revealed that deep tillage is effective at creating infiltration on compacted soils. Note the rooting density of vegetation beyond the 15 cm depth in the tilled plots vs. the control and aerated plots. (Data provided)

Preliminary testing of core aeration and tillage on compacted soil showed that the aerator was not able to penetrate sufficiently to have any effect, but the tillage provided high infiltration and deep rooting. However, if weather or other factors inhibited vigorous grass growth, the effects were lost.

The university established test plots in three distinct soil types statewide in 2011 and collected three years’ worth of measurements comparing plots that were deep tilled to different depths or left alone. In addition, they investigated incorporating compost and a water-absorbing gel. After establishing the test plots, they measured grass growth and infiltration over two to three years.

Compacted soil that was deep tilled and seeded to grass had more vigorous vegetation and maintained high infiltration rates for almost three years of monitoring. Infiltration rates of greater than 10 inches per hour were frequently measured. There was no clear advantage of the amendments tested, except that compost incorporation helped prevent re-compaction by mower traffic at one site. Vegetation did appear more vigorous where compost was incorporated, but the effects were not sufficient to be clear in the data analysis.

Infiltration rates in the deep tilled plots were high enough to suggest that runoff from impervious surfaces could be directed to these areas, offering a solution for handling stormwater in built environments.