Many technologies are available that aid police departments in solving cases and apprehending criminals quickly, including surveillance cameras that monitor public spaces. But what happens when a city wants to require surveillance in the private sector for police use? What legal issues are involved, and what is the wisest use of this technology? It’s a challenge to use successful crime-fighting techniques while maintaining the rights and privacy of businesses and citizens.

In early 2014 a break-in occurred at the Snout Saloon in Chippewa Falls, Wis. The owners had installed high-quality surveillance equipment throughout the bar, which recorded the intruder damaging machines and stealing from the cash register. When they discovered the damage, they quickly offered the video to police. 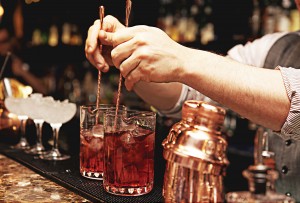 Chippewa Falls police say that, under a proposed ordinance to require security cameras in city bars, they will request the video only if they have something substantial to justify an investigation. A search warrant would have to be issued in the case of owners unwillingly to voluntarily share video. (Shutterstock photo)

Ordinarily, hours of interviews would have needed to be conducted just to get a vague description of a suspect. But the camera footage gave officers a highly detailed picture of the culprit, allowing them to track and apprehend him while he was still in the area.

The officer in charge of the case was impressed with the time and effort the department saved, and worked with other officers in making recommendations to the city council for implementing a citywide policy for taverns. The ordinance was introduced in May and is actually an extension of a law that requires liquor and grocery stores to have surveillance cameras.

As with liquor and grocery stores, under the law bar owners would be required to have surveillance of all entrances, cash registers and areas where alcohol is not securely stored. The proposed law states that cameras must be operational during business hours and recordings must be kept for a minimum of 21 calendar days. It also says that these recordings “shall be made available to law enforcement at any time.” Owners can face a fine of $300-$500 if they violate the ordinance.

But the language regarding law enforcement access, along with concerns that the law singles out a specific group of business owners, has prompted the city to review the ordinance.

The phrase “shall be made available to law enforcement at any time,” has made some bar owners and citizens apprehensive. Michael Hanke, head of the city’s safety committee, was concerned that the first draft’s wording might be an infringement of tavern owners’ constitutional rights. He discussed the issue with the city attorney.

“I had reservations about the draft allowing access to privately owned material on demand … I don’t want to cultivate a spirit of domineering over businesses; we are here to serve the community,” said Hanke. “I was advised that any material not freely turned over would require a warrant.”

Chief Wendy Stelter concurred, noting that the department doesn’t, for example, force grocery stores to hand over video. She also made suggestions to the city council for the ordinance be reworded to make it clear that police weren’t going to be demanding video just to see if anyone was up to no good. Police would not be asking for video unless they had something substantial to justify an investigation. If the tavern owner did not want to give up video recordings voluntarily, there would have to be a search warrant process.

Hanke was also uneasy about applying the ordinance to only one type of business in the city.“What we force one business to do, would we need to force all businesses to do?” He also questioned whether requiring this policy for bars is the wisest focus. “How many crimes are happening in bars as opposed to other parts of the city? Are we looking at the wrong area?”
Chippewa Falls has a population of roughly 13,000, and fewer than a dozen bars would need to update their existing equipment or install a surveillance system to meet the standards of the proposal. Hanke doesn’t think the city has an abnormal number of bar-related crimes, and has actually seen them decrease due to better education and programs from the local tavern league and self-regulation from the bars themselves. 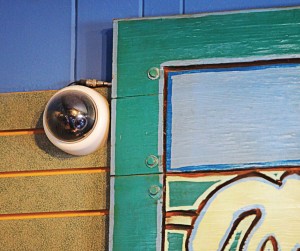 A break-in earlier this year at a Chippewa Falls, Wis., bar moved officials there to propose an ordinance requiring security cameras in all bars in the city. (Photo provided)

“The feedback from the affected owners and managers of licensed premises has been predominantly negative. A high percentage of bars in the city already have surveillance on their own, but resent being told that they have to do it, that their rights are being stepped on,” he said. On top of that, the cost of the surveillance system, which can range from $1,500 to $5,000, is entirely the bar owner’s responsibility. However, both Hanke and Stelter stressed that deadline extensions would be included in the ordinance due to the financial burden it poses.

The revised draft will reflect more of a spirit of compromise between the bars and the city. It is more in the vein of encouraging surveillance as a way of improving a bar’s safety plan, which plays a role in renewing a liquor license.

Currently, every year the police run an in-house computer search to find the number and type of violations from each bar and submit this report to the city council for review. If a bar has an excessive number of police calls, the chief meets with the owner to discuss the issues and how they can be resolved. A bar that has frequent police calls might be asked to look into installing a surveillance system as a way of improving its safety plan, while a bar that never makes calls to the police wouldn’t need to be addressed.

There’s no doubt that technology saves police departments time and effort and allows for quicker apprehension of criminals. Businesses and citizens might not see a proposal the same way, but city leadership can help to assuage those fears by including all stakeholders in the discussion. In Chippewa Falls that process yielded a proposal that promotes public safety while fostering harmony within the community.