The New Zealand Ministry of Civil Defence is roughly the equivalent of the U.S. Federal Emergency Management Agency. Amanda Millirons, assistant director of public works in Palm Bay, Fla., met with officials from the agency in June to discuss the role of public works personnel as first responders. (Photo provided)

Though a grant from the American Public Works Association, she also met with local, state and federal officials and observed reconstruction sites such as this one in the Christchurch City Centre. (Photo provided)

A strong volunteer network, government support and a commitment to asset management are bringing the Canterbury region of New Zealand back from the extensive destruction it suffered three years ago. That’s what Amanda Millirons discovered when the Florida public works official traveled Down Under in June.

Millirons, assistant public works director for the city of Palm Bay, Fla., was in the country to investigate local response to earthquake disaster. Her trip was made possible by the American Public Works Association William Jennings Randolph fellowship, which she was awarded in January. “Public Works Professionals as First Responders,” the topic of her application, was developed over years of observing that, in emergency situations, public works is often as necessary as law enforcement, fire service and EMS personnel.

“I wanted to learn about the recovery and rebuilding process, and the emergency management practices of New Zealand,” she said. Colleague Travis Greiman, engineering manager for the city of Centennial, Colo., and a fellow Jenning Randolph International Fellow, traveled to Mexico for a similar information exchange.

“In the past some of my responsibility has been for debris removal, so that EMS and other first responders can get through — and for emergency infrastructure evaluation and repair. We’re part of the county emergency management office, and our city in particular is interested in being an effective part of that team.”

In order to identify emergency management best practices within New Zealand’s public works departments, which are collectively known as “civil defence and emergency management,” and evaluate response efforts among the different levels of government, Millirons traveled to Auckland, Wellington and Christchurch for two weeks. There, she studied the cities’ emergency management practices and observed the rebuilding process that marches on after a 2010 earthquake and a second, even more devastating quake in 2011.

She found the Ministry of Civil Defence’s Wellington Region Emergency Management Office interesting for its division of emergency management responsibilities by region, she said. Members of the city council and public works department took her around for a tour of some of the city’s most crucial infrastructure and its natural hazards.

In Christchurch, buildings that were weakened and damaged in 2010 came crashing down in 2011. Transportation routes became impassable. One hundred and eighty-five people died where most of the damage occurred in 2011.

Reconstruction work was underway even outside Millirons’ hotel, but in the background the view was nothing but “pure, breathtaking beauty. New Zealand shines through hardships. They’re resilient.”

Among her stops was one particularly striking affirmation of that resilience: the Re:Start Mall, a shopping area constructed after the quake out of shipping containers repainted in bright colors.

“You don’t think they’ll be that nice, but you go in and they’re painted, decorated and designed like a store. It’s amazing.” Park benches and the daily presence of food trucks add to acceptance of the commercial initiative.

Millirons also toured red zones, which are areas too damaged and unsafe to allow residents back into. She learned that the quake’s “shaking” caused liquefaction to occur, a process said to be responsible for causing over 400,000 tons of silt to surface and creating extensive surface damage. The New Zealand government has allocated $4.8 billion to rebuild infrastructure in the greater Christchurch area, with the Crown committing $2.9 million and the Christchurch City Council providing $1.9 million in funding. 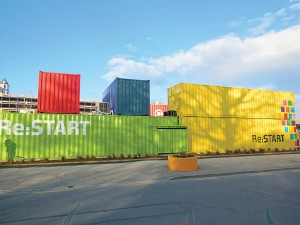 The Re:Start mall is a vibrantly painted retail complex that consists of shipping containers. The makeshift, post-quake solution is currently home to retail spaces, coffee shops and restaurants. (Photo provided)

In some cases, in residential and commercial areas, the topography became too damaged or unsafe for building. The government is buying up these lands and will sod and seed them as a public green spaces.

“New Zealand’s emergency management practices are more aligned with our practices than I had anticipated,” she said. “Embracing an ‘all hazards’ approach, they even use a similar incident management system, known as the Coordinated Incident Management System. It’s comparable to our National Incident Command System. And just like in the U.S., public works professionals are often the first government representatives to respond to the scene of an emergency and the last to leave.”

She also took note of the extensive attention given to asset management in New Zealand.

“By federal law, they have to track all of the infrastructure. They must have a system to know when it was built, the lifespan and how it rates currently. We do that here as well, but they do it more extensively. They’re definitely the industry leaders.” In 2013 Palm Bay Public Works Director Elia Twigg took the same impression of urgency in asset management development away from a trip to Australia.

“Our GIS team is already in place, it just needs to go further. We track and inspect, but the approach is different,” Millirons concluded.

“…A country of approximately 4.2 million, New Zealand traditionally has a strong volunteer network participating in a wide range of community functions. However, a unique movement developed after the September 2010 earthquake — University of Canterbury students unified and created the Student Volunteer Army. Created through a Facebook page, students could find out how to volunteer during the different phases of emergency events. First the group organized volunteer placement to provide transport, food and support for students. Additionally, they focused on projects such as clearing over 65,000 tons of silt caused from liquefaction. The group continues to evolve today.

“The University of Canterbury has continued to make earthquake research a priority with the development of the Quake Centre. I was able to tour their facilities and was impressed with the work they are doing regarding earthquake engineering. Another important story to share is the development of Stronger Christchurch Infrastructure Rebuild Team. scirt was organized to rebuild the city’s earthquake damaged roads, fresh water, waste water and stormwater networks. The organization’s model is a unique partnership between Christchurch City Council, Canterbury Earthquake Recovery Authority, New Zealand Transport Agency City Care, Downer, Fletcher Construction, Fulton Hogan, and the MacDow Fletcher Joint Venture.”