Memorial Day, which falls this year on May 26, will witness special celebrations in a variety of patriotic ways.

In fact, some cities observe the holiday all month long. In Myrtle Beach, S.C., Military Appreciation Days are May 1–31. For six years the observance has shown the community’s gratitude and support to the men and women of the nation’s military services. Its thanks are evident during a big Ocean Boulevard parade and a family picnic that takes place on May 24. 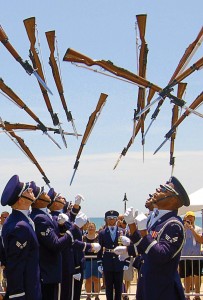 Myrtle Beach, S.C., celebrates Military Appreciation Days with
an array of activities, including a parade the Saturday before the holiday. (Photo provided)

Myrtle Beach was a military town for nearly 50 years, home to Myrtle Beach Air Force Base. The base closed in 1993, but many of those who were stationed there during its long history came back to work or to retire, according to Mark Kruea, public information officer for the city.

This year, it will also welcome one of the traveling Vietnam War memorial walls. “We have a nice Memorial Day ceremony on the plaza at the Myrtle Beach Convention Center,” said Kruea. “The city co-sponsors this event with the Grand Strand Patriotic Alliance, an umbrella group of the various military organizations locally.”

Military Appreciation Days is celebrated
during the month of May in Myrtle Beach,
S.C. (Photo provided)

The picnic, which is set up on the pavilion site, follows a parade and is free to all military or former military members, along with their families. Residents also have the opportunity to meet the parade grand marshal, who is Montel Williams. Last year’s marshal was former Pittsburgh Steeler Rocky Bleier.

“Each year, we look for a grand marshal with a military background,” said Kruea. “If you aren’t familiar with either of these folks, they both have great military stories that precede their fame in other endeavors.”

The Roswell, Ga., color guard stands at the Faces of War Memorial. The city hosts
“Roswell Remembers” each year, a celebration that draws in excess of 6,000 people,
making it the largest Memorial Day ceremony in Georgia. (Photo courtesy of Roswell Recreation,
Parks, Historic and Cultural Affairs Dept.)

Roswell, Ga.’s annual “Roswell Remembers” ceremony, scheduled this year for May 26, has been dubbed the largest Memorial Day ceremony in Georgia.

In 1997, 12 patriotic individuals came together to create a truly unique Memorial Day event: a non-political, non-commercial ceremony honoring veterans and the sacrifices they made in protecting freedom.

From that humble beginning came the Roswell Memorial Day Ceremony, an event that attracts 6,000 to 7,000 people from throughout Georgia and the Southeast. In 2001, the ceremony was named “Roswell Remembers.”

Roswell Remembers is a joint effort of the city, the Roswell Rotary Club and the Roswell Recreation, Parks, Historic and Cultural Affairs Department.

Dubbed unofficially “one of the most patriotic towns in the U.S.,” Henderson, Ky., is home to the Henderson War Memorial Foundation.

City Manager Russell Sights and Malcom Neel, a member of the War Memorial Committee, have been told that Henderson sent more men per capita to the armed services during World War II than any other county in the U.S.; it also is rumored to have purchased more bonds per capita. While neither have ever been able to verify the stories, Henderson is a true patriotic community.

“We do have an outstanding Memorial Day service and celebration. Henderson is noted as a very patriotic community,” said Sights.

A Memorial Day ceremony is a tradition in Henderson, added Neel. “We still run true to our patriotic form on a regular basis.”

The American Legion places 4,000 crosses in the city’s Central Park each year. The placement of crosses began in 1946, with 47 crosses for World War II soldiers killed in action.

The War Memorial committee does all planning for the event.

“In fact, this is always a well-attended event and many participants actually bring lawn chairs and sit in the street in front of the program platform. In addition, security is provided by the police chief and his officers and street clean up is provided by the public works department,” said Sights.

“For those cities who do recognize veterans, both living and deceased, it sets those communities apart to say to those who served in the military, or to families who had a family member serve, that it is appreciated, recognized and remembered by the citizens of the community,” said Sights.