↓
Home→Personality Profile→A close second: the life of a vice mayor 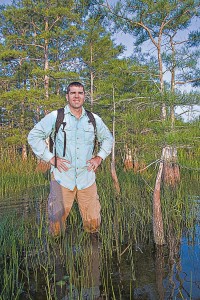 Shelley was elected last year to a two-year term as the city’s vice mayor, on the same ballot by which he was also reelected for another four years as city councilman.

Homestead’s charter provides that each city council candidate is also placed on the ballot for vice mayor, though he or she may formally request to be removed from such consideration and run only for council.

For the remaining dual candidates, voters must vote separately for each position. The candidate who wins his or her council seat and receives the most votes for vice mayor serves in both capacities.

The duties of vice mayor are what one would expect. “I act as the chair of the meetings in which the mayor is absent,” said Shelley. “This also applies to presenting proclamations and other official duties of the mayor.

“Additionally, should the mayor become permanently unable to continue serving as mayor, then under our charter, the vice mayor may elect to become mayor for the remainder of the current mayor’s term,” he added, citing just such an eventuality prior to last year’s election.

Does this specter of suddenly vaulting into mayorship affect the way Shelley does his job?
Like the dedicated sideline skipper, his answer is no.

“The extra responsibility does not really change the way I prepare for meetings or issues, as I have always taken my responsibility as an elected leader very seriously and prepare accordingly,” Shelley explained. “However, this question does highlight why it is important that the voters elect a vice mayor who has the experience to step into the role of mayor, should the need arise, without affecting the operation of the government.”

The man doesn’t let much grass grow under his feet professionally or personally.
A partial list of Shelley’s community involvement includes serving on the board of directors of the nonprofit organizations Youth Fishing Foundation and The Everglades Association; maintaining active membership in the Rotary Club of Homestead, the Military Affairs Committee and the Homestead/Florida City Chamber of Commerce; chairing the St. Johns School Board; and performing pro bono legal services for various area nonprofits.

He is the council’s liaison to several entities, including the Historic Preservation Board, Seminole Theatre and the Homestead-Miami Speedway.

In 2006, Shelley opened his law office in downtown Homestead. Two years ago he started his own photography business. Some of his eye-popping work can be seen at www.stephenshelleyphotography.com.

He married wife Jenn in October 2009; they are expecting their first child in July.
During what little free time he can snatch, he describes himself as “an avid outdoorsman who loves to fish, camp and photograph nature.”

Somehow, he gets it all done, though it hasn’t been easy. He acknowledges that it has been a challenge to learn to balance all of his responsibilities. But for someone who is only 35 years old, Shelley doesn’t have a bad track record. He has only been a Homestead resident since 2004 and “inadvertently got involved in public service” in the first place.

“I chose to open my own law practice and raise a family in Homestead, so I wanted to make sure that Homestead would continue to be a place I wanted to call home for many years to come,” he said of his genesis. “I never had any plans to enter public service, but did so more out of necessity and happenstance.”

Perhaps it was this fresh outsider perspective that allowed him to see a prominent city asset hidden in plain sight for decades and led to one of his proudest accomplishments in city government. 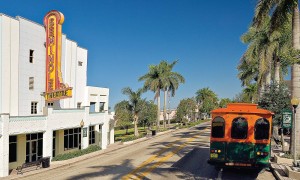 The National Park Trolley ambles past Seminole Theater in Homeland, Fla.’s downtown historical district. The theater, built in 1921, was rebuilt in 1940 following a devastating fire. After its second near-destruction by Hurricane Andrew, the theater closed its doors in 1979. The exterior was recently renovated and the interior work awaits funding.

“We are one of the few cities in the United States located between two national parks (Everglades to the southwest and Biscayne to the east),” but it had not historically positioned itself to capitalize on this unique geographic attribute.

The result? “More than 1.5 million tourists were visiting these national parks each year but not spending economic dollars in our city.”

He connected the dots and launched a successful two-year effort to rebrand the city as “The Gateway to Everglades and Biscayne National Parks.” It implemented the Homestead National Park Trolley, a free service originating in the downtown historical district and shuttling up to 400 tourists per weekend to the two national parks and Homestead-Bayfront Park. Riders are granted free admission to all three parks.

The project helped solve one of Homestead’s biggest challenges: bringing higher paying jobs and economic development to the city.

The municipality is also awaiting bids for some downtown revitalization, including a new police station and city hall building. But Shelley isn’t stopping there. On his plate for the future is the construction of a 560-foot tower, situated a couple blocks from the downtown trolley stop, that offers a panoramic view of both national parks, the city of Miami and the Florida Keys.