They were bigger, badder and greener this year than ever. 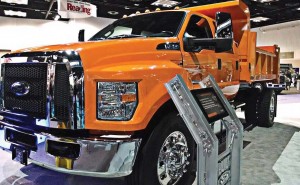 Vocational trucks and the new technologies that are making them leaner — if not smaller — took center stage in March at The Work Truck Show 2014 in Indianapolis, Ind. (Photo by Ashley Adamaitis)

With emissions standards going up again and mileage expectations rising even faster, it was reassuring to see at The 2014 Work Truck Show that manufacturers aren’t sacrificing size or power in the trucks cities count on to keep residents on the road, water flowing to their homes and make sure the lights stay on.

The success of this year’s show, NTEA Executive Director Steve Carey said, proved that the work truck industry is indeed rebounding from the Recession years characterized by significantly lower sales.

Thousands attended the annual event, which took place at the Indiana Convention Center, Indianapolis, Ind., March 5–7. The annual Green Truck Summit held in conjunction with The Work Truck Show opened two days before the event and proved as popular as ever. Attendees who attended the educational sessions heard tips for running an efficient shop, how to utilize new technologies to manage remote fleets and how the switch to propane has gone for several who made it.

During the week, Cirus Controls was given the show’s Innovation Award for the GPS DataSmart Winter Maintenance Reporting System; one of many recognitions made at the event. Several exciting announcements were also made at the show: among them, that NTEA has opened a Canadian Government Relations Office in Ottawa, for the purpose of addressing the increasing challenges presented by the international marketplace.

Next year’s show will be in Indy also. Mark your calendar now for The Work Truck Show 2015, March 3–6.