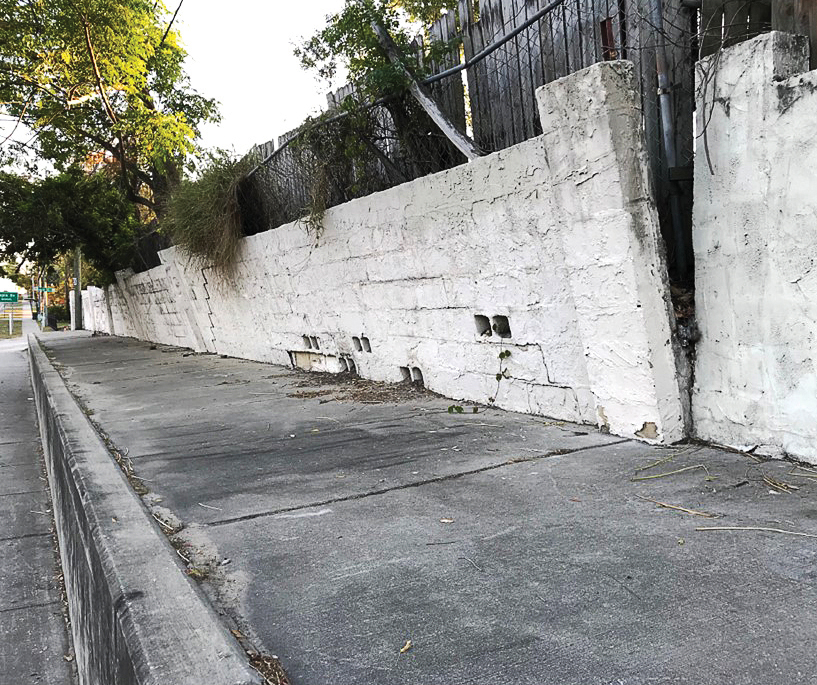 Pictured is the affected concrete block wall and its surrounding area, which includes a sidewalk, Hiawassee Road and the Hiawassee Highlands subdivision. (Photo provided)

A reinforced concrete block wall, originally constructed 40 years ago for the Hiawassee Highlands, a single-family residential subdivision, showed rotation of instability that may impact the walking residents adjacent to a busy highway.

The existing concrete block wall is positioned above a lower tiered concrete gravity retaining wall, which was constructed around 1992 as a part of the Hiawassee Road roadway improvement.

A geotechnical evaluation of the failure was commissioned to assess the area’s ground conditions behind the unstable block wall as well as the structural conditions of the block wall and lower level gravity wall. The wall rotation was determined to be the result of lateral earth pressure from the growth of a tree root, which abuts the block wall. The soil borings behind the wall showed fine sands and none of the typical slope failure with a scarp crack or any other superficial manifestation of slope stability.

The localized area where the concrete block retaining wall is bulging out and on the verge of failure poised a potential hazard to pedestrians using the sidewalk and the motoring public using the roadway. The block wall also acts as a retaining wall for the higher elevation residential yards within the Hiawassee Highlands subdivision. The pronounced wall bulging areas correlate to the location of large trees, which are up against the wall. The affected resident 7005 Laurel Hill Drive has indicated that the distress has become progressively worse over time and it is now a significant concern for pedestrians, motorists and the residential properties.

The repair plan calls for:

The construction of this wall had to be carefully planned and designed considering the proximity of the wall to the residential structure and the sidewalk on Hiawassee Road. The water table is deep and does not influence the design; however, the type of soil is a major factor in developing the repair plan since the light-colored sands are dry, of loose compactness and cohesion less, and extend to a depth of over 16 feet. Such sands can shift when, for example, a void is created by the removal of a large tree root, which is similar in effect to the movement toward a void created by a small sinkhole.

In addition, slope instability and sand sloughing are a major concern when the existing wall and its foot are removed for reconstruction. Removal of the wall and footing will leave a 6-foot-high unbraced vertical face of cohesion-less sand with the potential to collapse onto the sidewalk. A collapse at this location can propagate within the sand mass to causing shifting/settlement under the building foundation.

Based on the above concerns, the elements and sequence of the repair plan chosen to mitigate are:

Due to all the constraints, the developed construction methodology compiled with the following sequential steps are:

Deodat Budhu, P.E., has more than 36 years of experience in consulting, contracting, teaching, research and public works in a variety of civil engineering disciplines. Budhu is the current manager of Orange County, Fla.’s, Roads and Drainage Division and is responsible for the daily administration and management of 235 employees in addition to an annual operation and capital budget totaling $98 million. He holds a Bachelor of Science in civil engineering and a Master of Science in water resources engineering. He is a registered professional engineer in both Florida and Virginia with memberships in several professional organizations and has authored more than 70 technical publications.

NEXT: Lancaster welcomes public works under one roof