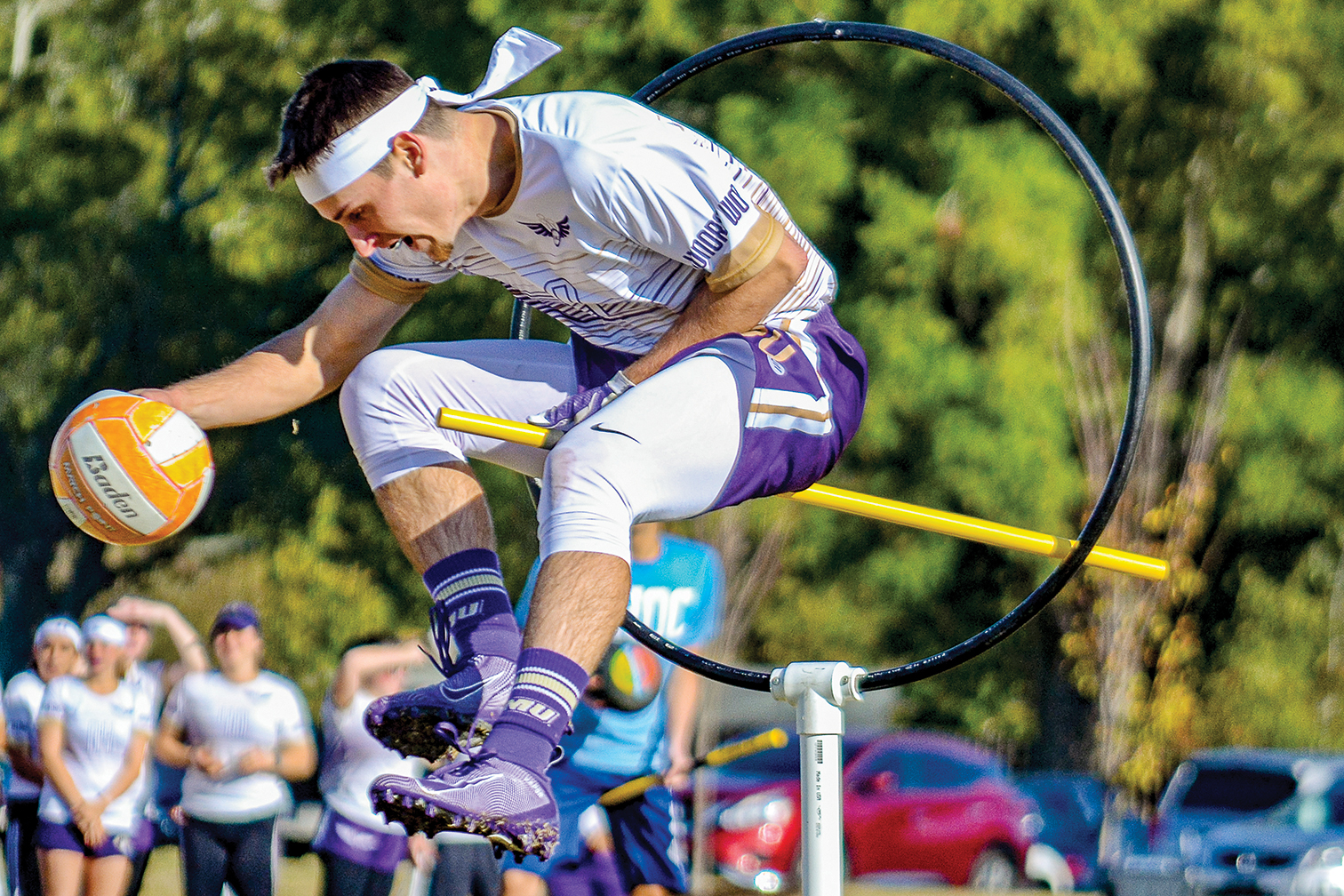 A player with one of the 20 competing teams at the 2019 Mid-Atlantic Regional Quidditch Championship scores 10 points by getting the quaffle through one of the hoops. This two-day event brought 440 athletes and 20 U.S. Quidditch staff members and volunteers to Goldsboro, N.C., for the games. (Photo provided)

The game of Quidditch got its beginnings as a fictional sport in the “Harry Potter” series by J.K. Rowling. In October 2005, a freshman at Middlebury College in Vermont decided to make this fictional sport a reality and laid the foundation for the sport’s rule book. Fourteen years later, the sport’s popularity continues to spread as Goldsboro, North Carolina, was chosen as the 2019 and 2020 host city for the Mid-Atlantic Regional Championship.

“Quidditch is a unique sport and Goldsboro is a unique city,” Ashlin Glatthar, Goldsboro-Wayne County travel and tourism director, commented. Last year the city put a bid in to host the regional championships knowing that it would be the perfect complement to the sport and the U.S. Quidditch organization.

As an interested host, Goldsboro had to have all paperwork turned in by Feb. 15, 2019. This paperwork included an intent to bid form, a bid snapshot form and a formal proposal. Approximately 10 destinations competed for the chance to host the regionals both last year and this year. After review, three finalists were chosen and site visits to these potential host cities were scheduled. 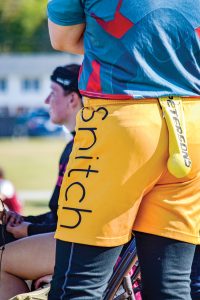 The snitch is a neutral player dressed in yellow with a velcro tail attached to their shorts. They are able to use any means to avoid capture by each of the team’s seekers. The seeker is the only player allowed to go after the snitch. Once the snitch is captured by the seeker capturing the velcro tail, the capturing team earns 30 points and the game is over. (Photo provided)

Goldsboro received its official visit June 9, 2019, and gave USQ staff a tour of the sports complex where the championship would be held, local hotels and the city’s historic downtown. While there are bid requirements in order to host a regional championship, it is also up to the city to make an attractive offer. Goldsboro did so by utilizing hospitality plans, marketing, venue sites, amenities and creative budgetary solutions.

“We capitalize on the simple way of life that gets lost in the technology and noise of metropolitan settings,” Glatthar mentioned. “Just as we ‘Goldsborians’ pride ourselves on being unique, the sport of Quidditch epitomizes the essence of ingenuity and uniqueness.”

The Mid-Atlantic Regional Championship was hosted Nov. 9-10, 2019, at the Bryan Multi-Sports Complex in Goldsboro. Prior to the event, Tim Salmon, city manager, proclaimed, “We are proud to be the host city for this organization’s first tournament in North Carolina.”

“It’s exciting to see teams from such prestigious universities such as Drexel University and Penn State making their way to our city this weekend to compete for the championship title,” Glatthar announced prior to the beginning of the games. “We can’t wait to show off our sports complex, historic downtown and our Southern hospitality.”

Visit Goldsboro and the parks and recreation department prepared a fun weekend for players and fans. To welcome athletes and USQ staff, a Players Party was held Friday before the games began Saturday and Sunday. The Paramount Theater also hosted a movie night playing “Harry Potter and the Sorcerer’s Stone.”

The games also allowed the community to experience a new sport for the first time as a free public event. USQ staff even held Introduction to Quidditch clinics both Saturday and Sunday for ages 5 to 18. These clinics covered the basics of the game, ran drills and arranged a scrimmage.

Games between the 20 teams competing for the mid-Atlantic regional champion title began at 9 a.m. both Saturday and Sunday. The regionals are part of the qualification process to compete in the U.S. Quidditch Cup. The Quidditch Cup will take place in April.

“USQ wants to grow the sport’s awareness and we want to continue growing our Goldsboro-Wayne County awareness,” Glatthar noted. This regional championship worked to benefit both of these desires. 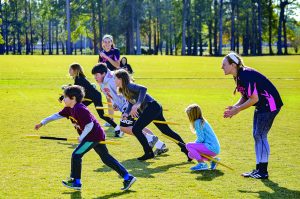 During the two-day championship games, the USQ held Introduction to Quidditch clinics where children could learn the basics of the game, run drills and participate in a scrimmage. This gave community members the opportunity to learn about a new sport. (Photo provided) 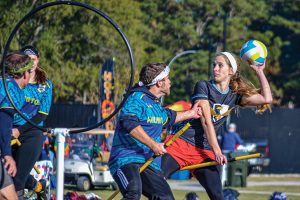 When it came to economic impact from the games, Goldsboro was estimating it would receive 200 room nights and approximately $185,000 in economic impact.

With 440 visiting athletes in the 20 competing teams along with 20 USQ staff members and volunteers, the city estimated a $64,000 economic impact on area purchases.

This impact could be seen in the generation of over $4,000 in sales tax and nearly $2,000 in hotel sales tax. There were 280 hotel room nights with an average length stay of two nights. It was also estimated that each athlete spent an average of $80 on area purchases during their stay. Additionally, 100% of the athletes and staff traveled to Goldsboro from outside of Wayne County. There were roughly 800 fans on Saturday and 400 fans on Sunday watching the games, for a total of 1,200 spectators visiting Goldsboro because of the Quidditch championship.

When it comes to this year’s Quidditch championship, Goldsboro is already planning ahead on what, if any, changes could be made to the event weekend.

“There are always things we learn after an event takes place of what we can do differently or add to improve event logistics,” Glatthar disclosed. “Some hospitality things we may add are spontaneous acts of entertainment throughout the tournament weekend and possibly move the Players Party to Saturday night and invite anyone and everyone out to enjoy food, music, games and more.”