After being launched to the public in October 2018, the Seattle Response Team has grown to nine full-time members and five trucks. Pictured are eight of the SRT members surrounded by their fleet. (Photo provided by Seattle Department of Transportation)

In order to help with the flow of traffic and limit delays following an accident or incident, Seattle, Washington, publicly launched a response team in October 2018 designed to improve the handling of these issues.

Following an incident on a state road in March 2015, the idea of a Seattle Response Team was born. This incident involved a driver overcorrecting and a semi tractor-trailer carrying salmon rolling over and blocking the road. It took nine hours to clear. The city hired consultants in May 2015 to review traffic incident management best practices across the nation and then evaluate the city’s practices and provide recommendations. 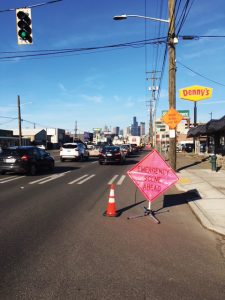 Fluorescent pink signs are used by the SRT to signal an incident ahead to drivers. Pink was chosen as a way to show motorists a difference between the incident scene ahead and a familiar orange construction zone sign. (Photo provided by Seattle Department of Transportation)

Previously a group of engineering emergency laborers would assist with emergency response and pothole filling evenings and overnight as part of the maintenance operations division of the Seattle Department of Transportation.

“In the weeks after that collision, MOD switched to a 24-hour-a-day response operation by adding staff to provide additional incident response capacity and slowly started implementing changes to enhance the Seattle T.I.M. program,” Sonia Palma, customer service, dispatch and incident response manager, explained. The emergency laborers have since become known as incident responders with the Seattle Response Team.

“Washington State Department of Transportation’s incident response team has provided incident response on state highways for years,” Palma continued. “Yet Seattle is one of only a few American cities to provide these services on city streets.” The SRT’s primary focus is assisting with incidents on the city’s busy arterial roads.

In order to maintain the best practices, the SDOT transportation operations center now also operates 24 hours a day, seven days a week. Palma explained, “The TOC operators are the eyes and ears of the SDOT and sometimes spot an incident before anyone else, leveraging the city’s intelligent transportation system Technology.” When the TOC spots an incident, it coordinates with radio dispatchers to inform SRT. The Seattle Police Department dispatchers also communicate any incidents, collisions and stalls with both the TOC and the SRT radio dispatch center. All of the city’s partners work together to follow the unified T.I.M. goals of responder safety, safe and quick clearance and prompt, reliable and interoperable communications.

Tools of the trade

The team has five trucks, each of which have a large, retractable variable message board to provide vital information to drivers. The trucks also include fluorescent pink signs, which symbolize an incident ahead. The Federal Highway Association chose pink to differentiate between the traditional orange construction zone signs. The thought is that when drivers see pink, they will think of compassion.

Trucks are also equipped with battery jump starters; gasoline; tow chains and ropes; traffic cones; various saws; a sledgehammer; crowbar; leaf blower; spill absorbent material; fire extinguishers; jacks; and a GoJak. The GoJak allows a single person to lift a car’s tires off the ground in order to push the car out of the way. 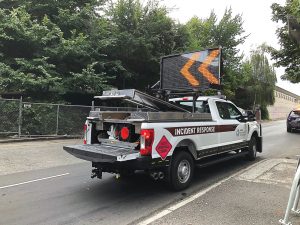 One minute of traffic backup can equal a four- to 10-minute delay for drivers. Therefore, each SRT truck is equipped with a retractable variable message board to communicate delays and backups to motorists. The primary goal of the SRT is to clear incidents and keep traffic flowing. (Photo provided by Seattle Department of Transportation) 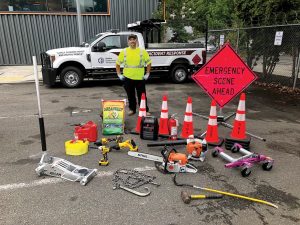 A member of the SRT displays the various tools that they use in order to keep traffic moving when an incident occurs. Each member must undergo training so they know how to properly use this equipment. (Photo provided by Seattle Department of Transportation)

What services do they offer?

Since its public launch in 2018, the team has grown from five to nine full-time responders. It has also added an additional radio dispatcher and hired a national expert, Patricia Westsik, as supervisor over the SRT and dispatch center. All of these additions allow the team to provide 24-hour-a-day service. The team has two trucks working the day shift, two trucks working the afternoon shift and one truck working the overnight shift. When necessary, the SRT can deploy more trucks and team members in order to keep traffic flowing.

The responsibilities of the SRT members are to clear city streets by responding to vehicle collisions, hazmat spills and street debris; removing stalled vehicles from traffic lanes; coordinating SDOT heavy equipment and sweepers to clear larger incidents; and filling potholes on an emergency basis. The response team provides roadside assistance to drivers by jumping car batteries, changing flat tires and providing gasoline to motorists who have run out of it. They also confirm reports of malfunctioning traffic signals.

Members work with partners in the fire and police departments to set up traffic control devices such as cones and signs so the departments can focus on their responsibilities. The unified command partnership between these departments and the SDOT is also supported by the SRT when the SRT is able to act as an on-scene incident command representative for the SDOT. SRT members are also responsible for providing the traffic operations center with incident statuses to pass along to the public and city leaders.

Seattle has approximately 3,954 lane miles of street within its limits, with an average of 874,376 vehicles traveling those streets each day. One minute of traffic backup can equal a four- to 10-minute delay for drivers, and one accident can cause other secondary collisions. Therefore, the SRT’s primary job is to guide traffic around these incidents and accidents in order to reduce the backups and traffic delays.

When it came to increasing the SRT, the around-the-clock services it has provided have proven to be a cost-effective investment for the city to help the transportation system run effectively.