Society’s fast-paced ways have transformed internet access from a luxury into a necessity and important quality of life issue. Equally relevant, technological developments have proven so beneficial in society that more and more advancements continue to arise at record speed on the tails of their predecessors.

Salt Lake City, Utah, is riding this wave of innovation, continuing to propel itself onto the digital world stage. In fact, Salt Lake City was prestigiously designated by the Federal Communications Commission in mid-September as one of two initial “Innovation Zones” — along with New York City — that will test wireless communications in relevant, real-world settings.

This announcement comes after a very thorough application process that started more than a year and a half ago. As Andrew Wittenberg, marketing and research manager for the Department of Economic Development in Salt Lake City indicated, many universities across the country competed not only for the distinction but for the grant that would be bestowed by the National Science Foundation and more than two dozen private contributors. According to Wittenberg, “One of the key criteria that set the University of Utah and Salt Lake City apart was a show of support by the city for the project.” Specifically, the city wrote a letter as a testament of public support and that the city would provide the right of way for the testing locations.

“While it is certainly great to see Salt Lake City on the same list as New York City, this does not come as a surprise to its residents,” said Wittenberg. As he explained, a healthy relationship exists between the city government and the University of Utah. Their networking relationship has actually enabled them to work together on previous initiatives. Furthermore, the University of Utah’s innovative campus is strong in the field of technology and more than capable of handling the task at hand. 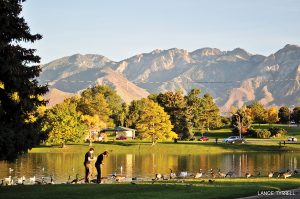 Residents have been supportive of Salt Lake City’s many improvements, especially if they further quality of life. Pictured is Sugar House, a trendy area of the city with a lively nightlife. (Photo provided by LanceTyrrell/Salt Lake City) 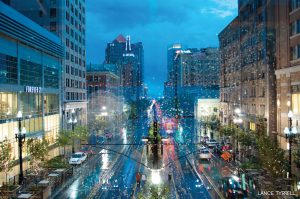 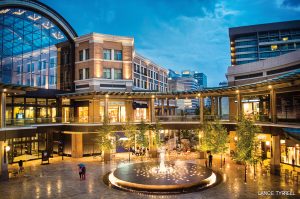 Wireless communications testing will continue in Salt Lake City for two more years into 2020 and 2021. It will cause no short-term disruption of residents’ cellphone usage. (Photo provided by LanceTyrrell/Salt Lake City)

“Technology is just as relevant for the city itself as it seeks to create a positive environment for living,” noted Wittenberg.

Salt Lake City, a thriving technical corridor, considers innovation an economic driving force. It is because of this that Salt Lake City intends to remain on the forefront of these breakthroughs.

“After all,” stated Wittenberg, “Salt Lake City has become more of a metropolitan area in the last 15 years, part of which is due to technological advances.” Its local culture is open to these improvements for a number of reasons: its recent, yet significant, growth, reputation for holding international events like the Olympics and emphasis on quality of life and environment.

The test sites will primarily be located on the University of Utah’s campus and areas of Salt Lake City near the university; however, finalization of details are in the works. Testing will continue for two more years into 2020 and 2021 before consumer participation will take place. The idea is to expand the network as testing continues. Right now, the select users will be local area businesses. They will be able to utilize this new technology, testing it in terms of business applications directed at making work easier and more efficient. During this phase where businesses will participate in the trials, no consumer interference is expected. This means there will be no short-term disruption of residents’ cellphone usage, and towers already in place will not be affected.

There certainly is value in investigating wireless communication technologies and networks with 5G capabilities. The goal, whether it be cellular networks, Wi-Fi connections or commercial applications, will ultimately be to provide faster speeds and more reliable connections. Thus, there will be benefits for consumers and commercial enterprises as well as students and CEOs alike. An anticipated further benefit includes incentivizing businesses to look at Salt Lake City for expansion and growth, knowing these kinds of technologies are being nurtured and embraced by the city and the state’s flagship university.

Overall, Salt Lake City’s honor is recognized by welcome ears. The results of the test sites will prove beneficial on individual and corporate levels in addition to the proposed improvements that can be understood and directed at the city’s future economic development. All in all, connectivity is important in the day-to-day lives of citizens as it promotes a sense of community and boosts productivity.