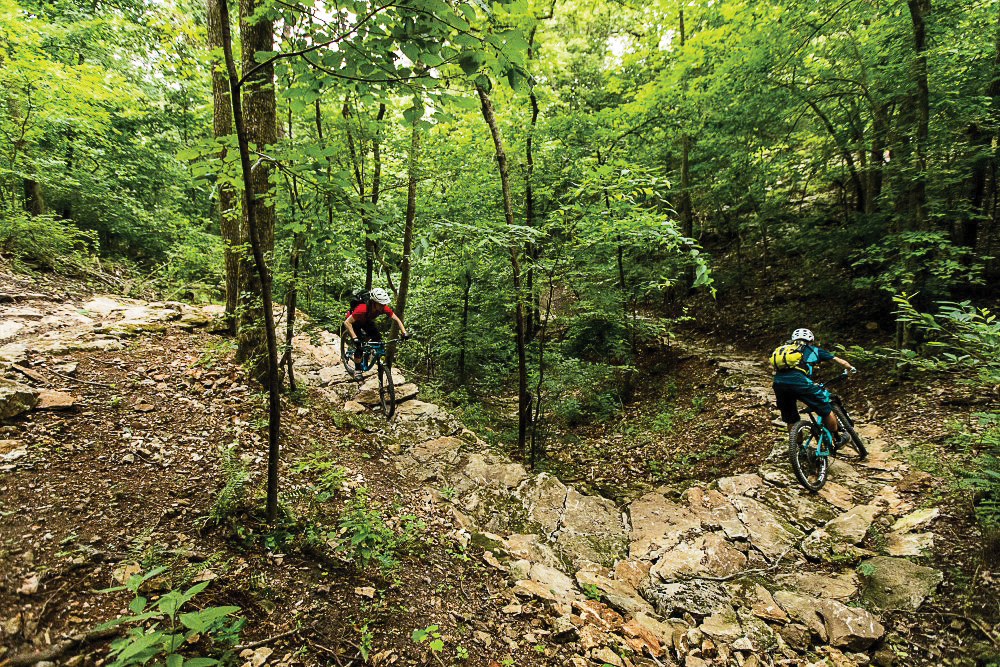 Located on a pristine, nearly 300-acre site just a five-minute bike ride from downtown Bentonville, Coler Mountain Bike Preserve offers visitors the opportunity to engage in active recreational experiences while reconnecting with themselves, others and the natural world. (Photo provided by the Walton Family Foundation)

At its core, the purpose of local government and community-oriented organizations is to assist and serve area residents. Typically, that’s by repaving roads, servicing utilities and ensuring that residents and prospective residents find living within a town or city’s borders is attractive.

That can be achieved through the beautification of a downtown corridor or opening up a new playground, but it can also be accomplished by supporting and maintaining mountain bike parks made up of dirt and some wood.

Coler Mountain Bike Preserve was designed and built in the Ozarks of northwest Arkansas a few years ago. The nearly 300-acre site is a five-minute bike ride from Bentonville, Ark., and provides residents and visitors with a top-notch mountain bike course, filled with jumps and twisting turns.

The publicly accessible preserve is essentially a series of greenway trails put together by the Walton Family Foundation, which is a family-led organization that invests in communities in northwest Arkansas. Its headquarters are in Bentonville. Coler Mountain Bike Preserve is on privately owned property, which has been designated for public use.

“I think the focus on mountain biking and natural surface trails has had probably over a decade worth of history in Bentonville and northwest Arkansas,” said Jeremy Pate, the Walton Family Foundation senior program officer. “We see the bike as a tool for youth and for adults to be able to get out for recreation, for transportation, to get places where they want to go and enjoy themselves while doing so.”

Before the Walton Family Foundation, Pate worked as the development director for the city of Fayetteville, which is the largest city in northwest Arkansas. He said at the foundation, they often partner with and provide grants to municipalities who are also looking to preserve open spaces.

In doing so, those municipalities often checkout Coler Mountain Bike Preserve as a possible way to design an accessible and community-friendly preserve.

“Coler is a really interesting project and I often describe it as a bit of a microcosm of a lot of our work in the sense of place strategy here at the foundation,” Pate said. “The reason I say that is it really kind of marries a lot of different areas of focus for us. Coler began as an acquisition of property to preserve it.

“It’s really picturesque. There’s this really nice clear stream with springs running through the valley, there’s a valley bottom and then it’s surrounded on both sides by hillsides.”

The plan is for Coler to be maintained by volunteers, but the mountain bike trails were designed and built in a way that reduces frequent maintenance.

Even though the Walton Family Foundation was the driving force behind the Coler Mountain Bike Preserve, building mountain bike parks is not necessarily the organization’s specialty. But there are groups that exist for the purposes of building affordable mountain bike parks and promoting the sport as a whole.

Currently, SAMBA is also in the process of building the Heatherwood Bike Park trail system in Ephrata, Pa. The nonprofit, volunteer-based organization is partnering with several local organizations to bring this park to a location near Fulton Elementary School, Ephrata Middle and High Schools and downtown Ephrata. 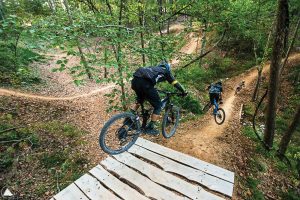 Mountain bike enthusiasts can test out their skills at Coler Mountain Bike Preserve in Arkansas. (Photo provided by the Walton Family Foundation)

This rendering highlights the 1.6 miles of paved trails that will run from the preserve’s north side to its south. (Photo provided by the Walton Family Foundation) 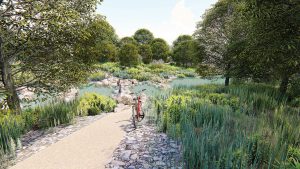 Visitors will be able to view the restored Coler Creek and surrounding wetlands thanks to overlooks, boardwalks and stepping stone crossings, which is pictured in this rendering. (Photo provided by the Walton Family Foundation)

“It’s something for kids to do that’s going to get them away from the screen, get him outside and get them interacting with other kids and having fun outdoors,” said Nick Loftus, SAMBA president. “It’s become a problem these days.”

The Heatherwood Bike Park will be located at an older park that was underutilized and had a reputation as a place kids were more likely to smoke a cigarette than be physically active.

Because SAMBA is volunteer-based, Loftus said the project should only cost about $10,000, including future maintenance.

The bike park trail system should be finished this year and will be composed of three areas. There will be a pump track area, where younger and inexperienced riders can get the feel for their bikes; a skill-building area with obstacles that get progressively more difficult and a loop for beginners and those riding to just to be physically active.

“It will be for beginners all the way up to pro-level racers and experts,” Loftus said. “Do you want to go out and ride all day? We have those opportunities now. We’re working hard to develop the opportunities that are out there and new trails don’t open every day, but we have a lot of different projects and developments that are kind of changing that perception.”

NEXT: Orrville firefighters go above and beyond providing event for their community