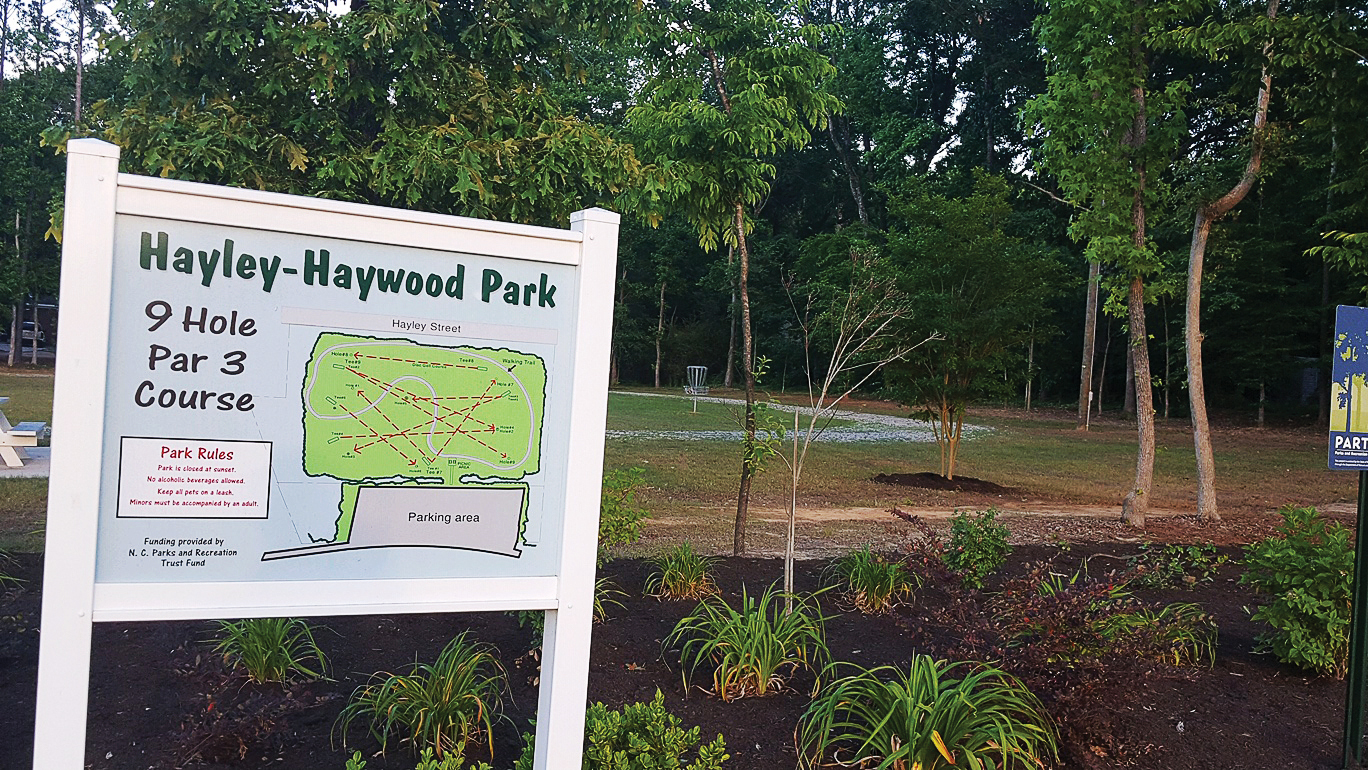 Last month, Warrenton, N.C., celebrated the first anniversary of its municipal park — the first one built in the small town with a population of about 850. This summer, the Hayley-Haywood Park bustles with warm-weather activities and happy “school’s out!” fun, according to Robert Davie, town administrator.

“L. Julian Haywood, M.D., approached the town about donating (a 4-acre) property if the town would use it for a park,” said Davie of the new recreational area, which is named the well-known Haley-Haywood family that has lived in Warrenton for years.

“The town board was willing to take ownership if matching dollars could be acquired through the North Carolina Parks and Recreation Trust Fund. Dr. Haywood was also willing to wait and see if the town received the grant award. When it was awarded, the agreement with Dr. Haywood was made,” he said. 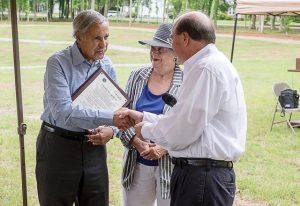 Dr. L. Julian Haywood is shown receiving an award recognizing him for his contributions to his hometown and to the fields of medicine and education from Warrenton, N.C., Mayor Walter Gardner at the dedication of the Hayley-Haywood Park last summer. Haywood’s wife, Betty, is also pictured. (Photo provided)

From the park, the soft yellow Greek Revival Sledge-Haley-Haywood home, which is on the National Register of Historic Places, can be seen. The Haywoods resided there for generations, and Dr. Thomas Haywood was thought to be the first African-American doctor in Warrenton. L. Julian Haywood, a 92-year-old cardiologist, is one of Thomas Haywood’s children.

Once the land donation occurred, the North Carolina Parks and Recreation Trust Fund pitched in by awarding a $28,000 matching grant to begin work on the land, which was followed by $5,000 from the town of Warrenton.

Though Haywood now lives and works in Los Angeles, he occasionally flies back “home” to visit friends and catch up with the news and see how the park is doing. Currently the park boasts a few picnic tables, a walking trail and a nine-hole disc golf course. Pets are allowed but must be on a leash, and a pet waste receptacle is situated at the park entrance. The park, which is lit, closes at dusk each day.

“Last May we were visiting the park, which was pretty much complete when it opened, except for additional landscaping and lighting changes,” said Haywood. “We were happy to see the park in use for a large family gathering with a big group of children, during our recent visit. It seems to be exceptionally well maintained.”

Haywood has been the recipient of many honors, including the Howard University Hospital Legacy of Leadership Award for Distinguished Health Care Educator; the LAC+USC Medical Center Distinguished Service Award; the American College of Cardiology Certificate of Merit; the American Heart Association Award of Achievement in Research; and the White Memorial Medical Center Commitment to Quality Research Award. In 2016 the coronary care unit at the Los Angeles County+USC Medical Center in California was renamed the Dr. L. Julian Haywood Coronary Care Unit in honor of the Warren County native son.