Route 66 passes into Tulsa next to a bronze sculpture of the family of Cyrus Avery, “The Father of Route 66,” which can be seen on the left.

Route 66, that iconic 2,448-mile asphalt ribbon of quintessential Americana, was known by several names, including the Main Street of America, the Mother Road and the Will Rogers Highway.

Stretching from Chicago to the Pacific shore in Santa Monica, Calif., the highway wound through eight U.S. states, bisecting or skirting 319 cities and towns along the way.

Commissioned in 1926 and fully paved in 1938, Route 66 served many purposes during its six decades of prominence. The highway stimulated the economics of the communities through which it passed, germinated numerous mom-and-pop enterprises and marked the birth of the roadside fast-food industry.

It supported the grim westward migration of most of the 210,000 economic refugees escaping the devastating brutality of the Dust Bowl during the 1930s, thus earning it an additional moniker, “The Road to Opportunity.”

It facilitated transport of military vehicles and equipment during World War II and the joyous homecoming of many soldiers afterward.

It provided a picturesque and adventurous channel of wanderlust for vacationing families during the era of big cars and cheap gasoline. 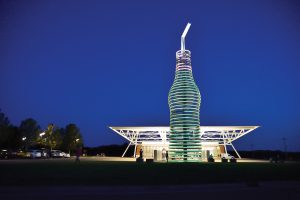 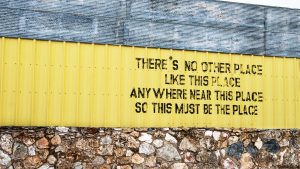 A witty poem is graffitied on a wall next to Route 66 in Texola, the route’s westernmost stop in Oklahoma. 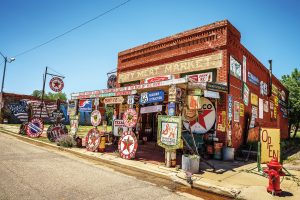 City Meat Market, the oldest building in Erick, is bedecked with a collection of Route 66 memorabilia.

The importance of Route 66 sharply diminished with the enactment of the Interstate Highway Act signed by President Dwight D. Eisenhower in 1956. The route was supplanted section by section with newer interstates and Route 66 was officially decommissioned in 1985.

Oklahoma is perhaps the state most securely pinned to both the genesis of the road and to its present nostalgic commemoration.

Entrepreneur Cyrus Avery, dubbed “The Father of Route 66,” lived most of his life in Tulsa, Okla. He was appointed to a federal board tasked with creating the Federal Highway System and prevailed in suggesting the route for a cross-continental east-west major highway.

He successfully argued moving the originally conceived route to the south to avoid construction through the Rocky Mountains.

Avery also championed the establishment of the U.S. Highway 66 Association to advocate the road’s complete paving and promote tourist and commercial travel.

Today Oklahoma boasts the most drivable miles of the original highway of any state. A portion of pavement of the route in Bridgeport, Okla., is on display at the National Museum of American History in Washington, D.C., together with a neon sign taken from a gas station and tourist cabins near Hydro, Okla.

Other Oklahoma landmarks along Route 66:

Several museums in the state are dedicated to the history and culture of the famed thoroughfare:

NEXT: Fighting the F.O.G.: Tyler, Texas