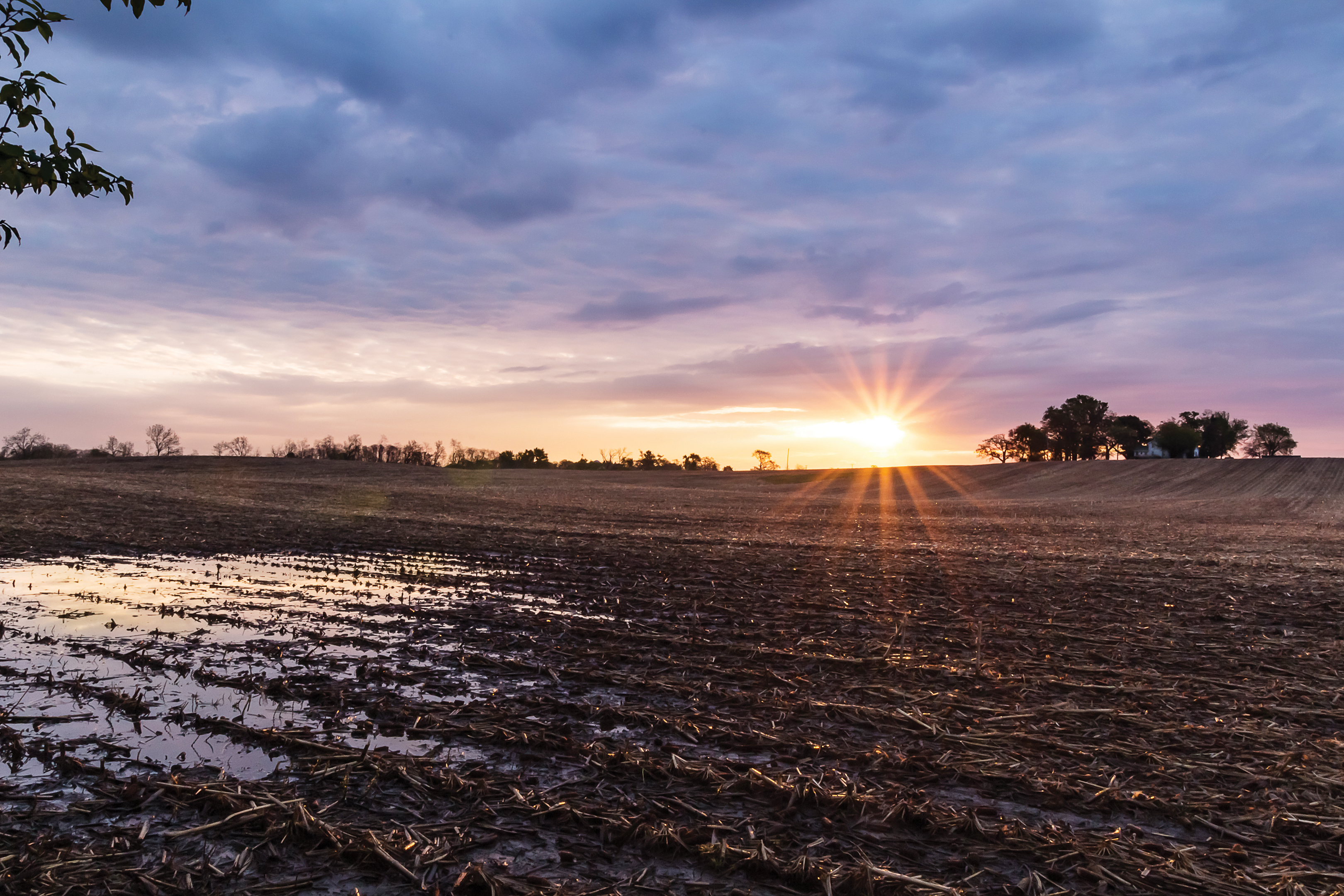 Water quality across the state of Iowa is impacted by agricultural runoff. To lessen this impact, new farming practices are being implement, such as cover crops and grass buffers. (Shutterstock.com)

As may be the case in many agriculture-heavy states, the water quality across the state of Iowa is being affected by agricultural runoff, releasing nitrates and phosphates in lakes, river, streams and groundwater.

Although it is a statewide problem, it’s definitely more of an issue in some areas rather than others. It’s worse in the Des Moines area and not as bad in the southern part of the state, according to Dan McIntosh, general manager of Southern Iowa Rural Water Association.

McIntosh said SIRWA is a rural water district serving 14 counties — seven full counties and parts of the other seven. He said a drinking water “ban” that was reported last fall was actually “an advisory, not a ban, and an isolated incident” due to a malfunctioning membrane on a tank and not related to the nitrate/phosphate issues.

There are 33 small communities that now purchase their water through SIRWA, and they get the bulk of their water — 85 percent — from the city of Creston. McIntosh said they’ve put in all new sewer systems in the last 15-20 years.

The subject of Iowa’s water quality has been studied by several departments at Iowa State University — looking at the economic, health and environmental issues.

Matt Helmers, director of Iowa Nutrient Resource Center and a professor in the Department of Agricultural and BioSystems Engineering, spoke about the state’s water quality, “We do certainly have issues with large nitrate levels in lakes and rivers and shallow groundwater. There’s been some sediment, too, but the big focus is on nitrates and phosphates.” 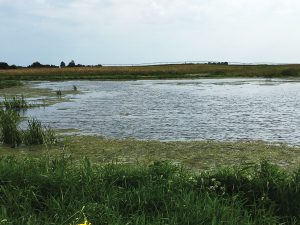 Pictured are wetlands in central and north central Iowa, which are considered an effective means of nitrate removal. Wetlands are considered an “edge of field” method of removing nitrates and stopping them from getting into lakes, rivers and streams and drinking water sources. (Photos provided by Iowa State University)

Helmers said the problem is “certainly not new, but there’s been an increased emphasis on reducing the levels with the Iowa Nutrient Reduction Strategy released in 2013.”

The Iowa Nutrient Reduction Strategy came to being when Iowa, along with 12 other states whose waterways led into the Mississippi River and Northern Gulf of Mexico, were required to assemble and implement a nutrient reduction strategy to reduce nitrate drainage into the Gulf, which was creating hypoxia or dead zone. The Iowa NRS is a collaborative plan developed by the Iowa Department of Agriculture and Land Stewardship, Iowa Department of Natural Resources and the Iowa State University College of Agriculture and Life Sciences.

The goal is to reduce the amount getting into the Gulf by 45 percent by 2035. The Iowa NRS is publicly and privately funded.

Helmers said these nitrates and phosphates are getting into the drinking water system in a couple of ways — one way is directly into the water sources like streams or the shallow flow under the streams. Des Moines Water Works gets much of its water from the Raccoon River, which is high in nitrates and because of that the water has to be treated before being sent out. 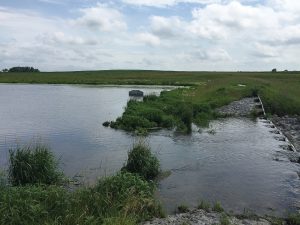 Reportedly the Raccoon River is a source of drinking water for 500,000 central Iowa residents. In 2015 the Des Moines Water Works brought a lawsuit against drainage districts for funneling high levels of nitrates into drainage tiles, short-circuiting more natural methods. A judge dismissed the lawsuit in 2017.

Another source for drinking water is shallow groundwater, which is susceptible to having high levels of nitrates and phosphates.

Helmers explained that while most cities and towns do treat potable water before it reaches consumers most don’t have or need the nitrate removal technology necessary to remove the nitrates because they are within the acceptable standards of 10 parts nitrogen per million.

He said Des Moines was not meeting that standard despite blending so the Des Moines Water Works purchased nitrate removal equipment, which is a separate process from normal water treatment.

On July 17, 2018, Danielle Gehr wrote in her Des Moines Register article, “Greenfield under tap water drinking ban following detection potential toxin,” that residents were under a bottled water advisory — pending testing — due to algae in the water system.

Officials determined the water in town was not safe for drinking, cooking or brushing teeth. It was found that the source of the town’s water — Lake Greenfield — was experiencing an algae bloom. Officials warned that boiling the water would not destroy the algae and might, in fact, make it more concentrated.

Additional testing showed that the levels were not unsafe for drinking water levels, but at that point, town officials suggested boiling the water for a few days.

To correct the issue, Helmers said one step is to reduce the amount of nitrates and phosphates that are being put down and the span of time they are being applied — whether the source is manure or commercial fertilizer. Having more crops on the land for more parts of the year, such as ground cover crops like rye grass, oats, crimson clover, oil-seed radish and cereal rye, also helps reduction efforts.

Wetlands have been a “most effective practice” as they intercept the water. Bioreactor wood chips and saturated buffers are also being used to trap the nitrates. 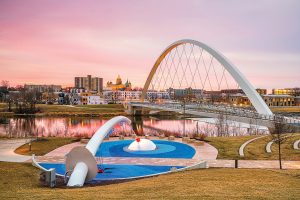 Iowa was one of the states required to assemble and implement a nutrient reduction strategy to reduce nitrate drainage into the Mississippi River and ultimately the Gulf of Mexico. It formulated the Iowa Nutrient Reduction Strategy. (Shutterstock.com)

According to the Illinois Council on Best Management Practices, saturated buffers removes nitrates from the subsurface. Instead of the water flowing through the tile to an outflow point, it’s directed to a lateral tile that runs parallel to a ditch. A grass buffer is created at the edge of the field above the lateral tile, and it takes up the water and nutrients before they leave the field.

Land management use like planting perennial crops is also part of the plan.

“We’re looking from field to stream at every level to minimize nutrient losses,” he said.

Helmers didn’t want to speak to health risks because it wasn’t his area of study, but he did say that one concern with water that has higher than recommended standards specifically relates young children and infants. Nitrates can reduce oxygen levels, causing in children what is being called “blue baby syndrome.”

There’s been a lot of focus in the last decade on reducing sediment and helping control phosphates, but he said, “We still have a long, long way to go.”

Although water quality has been a focus for the last 10-15 years, Helmers said nitrate reduction efforts have really ramped up the past five years with a more concentrated effort. He’s seeing more acres of ground cover crops, wetlands and saturated buffers being used.

“These efforts are encouraging, but we need to exponentially increase the level of action. We need the level of adoption to accelerate dramatically,” Helmers said.