Hybrid and plug-in vehicles can begin delivering sustainability value from day one, realizing between 25-50 percent improvements in miles driven per gallon and a 20-33 percent reduction in carbon dioxide emissions. (Photo provided)

As more cities across North America continue to put forth ambitious carbon reduction goals, municipal fleet managers are increasingly being tasked with making the changes needed to turn those lofty sustainability targets into reality. The U.S. Environmental Protection Agency now recognizes transportation as the number one contributor to greenhouse gas emissions, so municipal fleets are becoming a central area of focus for city and state governments looking to reduce their overall carbon footprint.

This trend, coupled with an increasing demand among city residents and society in general to “go green,” has led municipal fleet managers to consider alternative fuel vehicles for their work trucks. Electric powertrains have proven to be an enticing and increasingly popular option among consumer and commercial vehicles alike. However, all-electric, aka battery electric vehicles, can still pose significant challenges for many types of fleets — especially those who travel longer distances or in rural areas on their routes.

According to a 2018 study sponsored by GreenBiz and UPS, the top 3 challenges cited for BEV adoption by fleet managers were: 1) Initial purchase price; 2) Inadequate charging infrastructure; and 3) Lack of product availability. 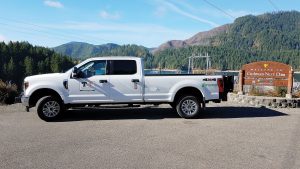 Tacoma Public Utility in Washington State is among the many municipal and utility fleets throughout North America leveraging the performance and sustainability of a plug-in hybrid electric Ford F-150 pickup truck. (Photo provided).

While progress continues to be made by BEVs across all three of these areas, these common obstacles continue to limit their wide-scale adoption by municipal fleets who rely on managing costs, maintaining operational flexibility and having access to a broad range of vehicle types to get their jobs done.

When budgets or infrastructure limitations make battery electric vehicles unrealistic for their electrification deployments, many of today’s top municipal fleets are finding that plug-in hybrid electric vehicles are the best way to make significant and immediate progress toward meeting their sustainability goals.

XL, the leading fleet electrification provider for Class 2-6 vehicles, is seeing enormous demand among municipalities for its plug-in hybrid electric family of pickup trucks, which includes the XLP™ — “XL Plug-in” — Ford F-150 pickup the company began delivering last year, and the newly launched XLP Ford F-250 Super Duty pickup, which is set to begin shipping later this year. According to XL Director of Marketing Eric Foellmer, the company’s plug-in hybrid electric F-150 has been proven to achieve up to a 50 percent improvement in miles per gallon, while reducing carbon emissions by 33 percent, making it an ideal fit for major municipalities across North America.

“As appealing as a zero-emission fleet vehicle might be, the fact is, they still face cost, infrastructure and operational challenges that can make them a poor fit for widescale deployment,” said Foellmer. “Plug-in hybrid electric trucks are a fraction of the cost, require no new infrastructure or operational changes and can make an immediate difference for fleets who have committed to hitting aggressive sustainability targets and need a way to get there.”

XL deploys its electrification systems as an aftermarket technology that can be installed in less than a day, with no impact on the vehicles’ operational performance, maintenance schedules or factory warranties. In addition to its plug-in hybrid pickups, the company also offers hybrid electric drive technologies for vehicles such as Ford Transits, Chevy Express and GMC Savanna vans, as well as a wide range of cutaways, box trucks and stripped chassis from Ford, GMC and Isuzu.

Municipalities and utilities along the U.S. West Coast have been among the most active in the nation in reducing the carbon footprint of their fleet vehicles to meet some of the country’s most ambitious statewide goals. Washington State has a goal to reduce greenhouse gas emissions to 25 percent below 1990 levels by 2035, and California’s goal is to reduce greenhouse gas emissions by 30 percent to reach 1990 levels by 2030. Municipal and utility fleets, including city of Palo Alto, Calif., Clark Public Utilities and Tacoma Public Utility — both in Washington — have all deployed XL’s plug-in hybrid electric trucks with outstanding results. Seattle Fire Department upfitted its Ford E-450 ambulances+
with the XLH Hybrid Electric Drive System from XL. Not only have the ambulances maintained their drivability, they have saved the city on fuel costs and reduced greenhouse gas emissions. (Photo provided)

According to Paul Chamberlain, fleet services manager of Clark Public Utilities in Washington, “We’ve worked for years to reduce vehicle emissions across our fleet while maintaining performance and controlling costs. We run hybrids, plug-in hybrids, and electric in our light-duty vehicles where they fit in to work practices, but the XL plug-in hybrid Ford F-150s are the first plug-in electric trucks in our operations fleet. They are large enough to carry crews, have the four-wheel drive capability needed in rough terrain and offer substantial efficiencies such as fuel savings and lower maintenance costs.”

Raul Juarez, fleet manager for the city of Palo Alto, shares a similar sentiment. “Greenhouse gas emission reduction has been a city goal for many years … We also need to provide the city’s fleet with reliable equipment that won’t have any problems if left unplugged. The city anticipates that XL’s electrification technology will both reduce emissions, as well as costs, so it’s a benefit for all.”

Many other municipal, utility and commercial fleets throughout the country are deploying plug-in hybrid and hybrid electric vehicles from XL to improve fuel economy and reduce emissions during normal operations. XL’s customers have driven nearly 100 million miles with the company’s electrification system, and new fleets are signing up every week to begin greening their transportation with a cost-effective and minimally disruptive technology.

“The transportation industry is clearly driving toward a more sustainable future, with electrification technologies leading the way,” said Foellmer.

“As BEV technologies continue to advance, and the North American charging infrastructure continues to push forward, plug-in hybrid and hybrid electric vehicles represent the most commercially viable way for municipalities to green their fleets today, while accelerating the path to an all-electric future.”