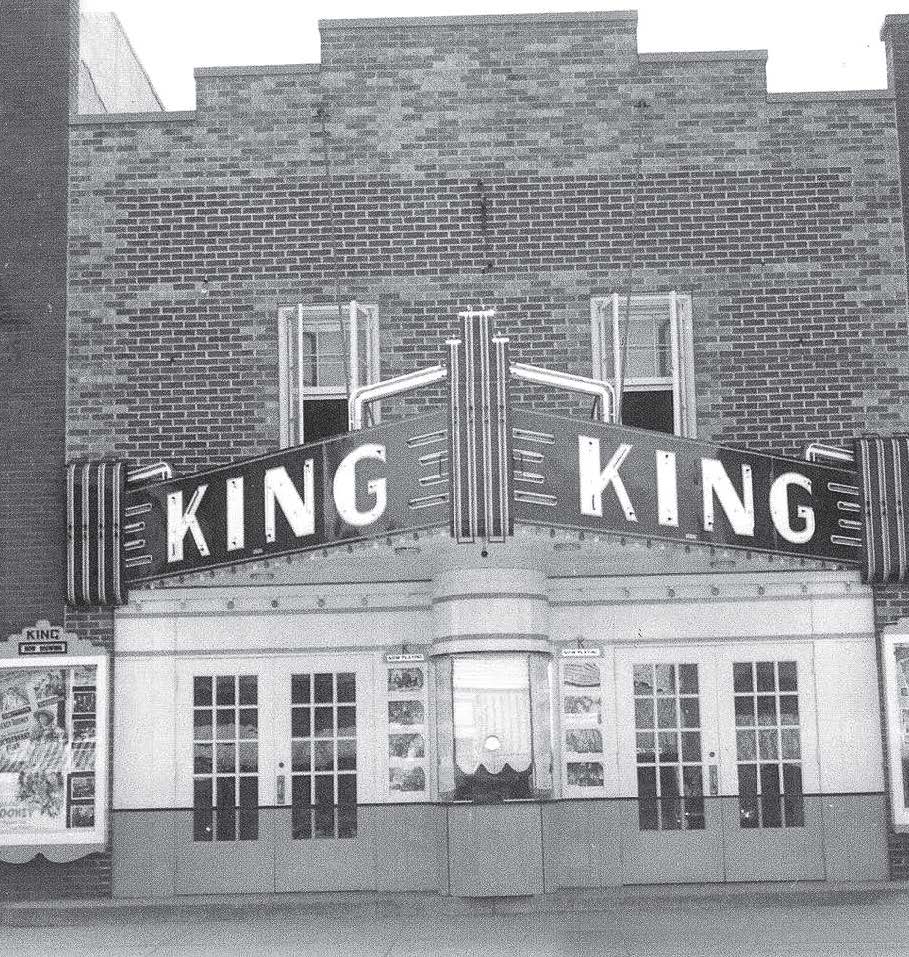 Pictured is the King Theatre as it appeared in the 1950s. Its marquee was added in the ’40s. (Photo provided)

Take a step back — just a few decades — and you would find small, one-screen theaters at the forefront of many communities from coast to coast. During the early- and mid-20th century, they not only entertained residents, but also served as news outlets, particularly during World War I and World War II when they allowed theatergoers to witness the efforts of the boys overseas. And while these theaters are often small — especially when compared to modern-day, multiscreen theaters — for many communities, they hold a big collection of memories that span generations.

That was certainly the case for the King Theatre in Ida Grove, Iowa, a small farming community of about 2,200 individuals. Built in 1914, King Theatre has been a landmark in the city’s downtown, with Ida Grove Council Member Doug Clough saying, “As a father, I have a lot of experience in the theater. When she was 12 years old, my daughter’s first date was at the theater.” 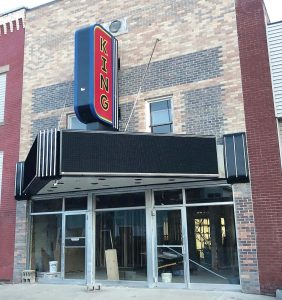 The King Theatre shines with its new sign and digital marquee. (Photo provided)

However, in the early 2000s, it became obvious something was up at the King. “The roof had gone to heck,” Clough noted, adding people had also begun to notice viewings were occurring less frequently — going from everyday to four times a week before there were no movie showings at all.

The owner, at the time, was approached by the city of Ida Grove and revealed he was choosing to focus on the other theaters he owned and planned to close his Ida Grove theater and another city’s, particularly as he had to make the transition to digital. Clough explained, “The digital age was coming, and it was going to be expensive.”

With this information, Clough said the city — led by Council Member Ryan Goodman — turned to the community in 2015, setting up a meeting at the local rec center to discuss courses of action. Sixty Ida County citizens turned up and overwhelmingly voiced their support for resurrecting King Theatre. That night they also collected more than $500 in pledges. Having community support and approval from the city council, a bid of zero dollars was offered alongside the promise to assume all liability for the theater building from the current owner. The offer was accepted and an 11-member board was formed to both preserve and operate the theater.

Clough, who has been heavily involved with the project since November 2015 and is always interested in sharing information about it, said, “In 2016, we got in a lot of volunteer work (for the deconstruction process).”

The interior was gutted and re-leveled since a major component of the renovation project was bringing the King into Americans with Disabilities Act compliance. Board members wanted not just compliance but ease of use from the restrooms to the lobby. “We listened very closely to those in town who may have disabilities,”

Clough explained, noting a paraplegic woman had visited the site and given her experiences navigating the theater. “These are experiences you want to listen to. Regardless of who they are, (King Theatre) must be for all the citizens of Ida Grove.”

Other components for the renovation project include a new digital marquee, signage and new theater seats. “We redid the stage for dual use,” Clough said, noting, with a motorized screen for films, the stage could be used for everything from school plays to political speakers and even for use by local manufacturers in order to  give presentations. “We want to serve not only the public but our industry.”

The project has not been without its challenges, with Clough sharing, “In late June 2017, the back wall fell. We had a big, gaping hole.”

Ida Grove, he explained, had been hit by a powerful storm, and improper drainage, which caused hidden water infiltration, played a role in the wall’s collapse. Still, he is thankful no one was hurt when the wall went down. “If it had happened at 6:45-6:55 (p.m.), a lot of people could have been hurt, but we had left early (that day).”

This incident could have ended the project, and Clough noted there were a couple times he really prayed to God about helping see the project through to completion. After the building was cleared by engineers, a contractor was found to rebuild the alley-facing wall and install a new drainage system to prevent an encore performance. Ultimately, Clough said, “Bottom up, it is better than it was before. The wall is solid concrete and there is a sub-pump now. There is no more water coming in.”

More recently, in November 2018, King Theatre has had new front glass doors and a bump-out faux ticket booth installed. It has also received theater seats, which were freighted in — with shipping donated by an Iowa trucking company — from Grand Rapids, Mich.

Throughout the process, the city turned to grants, including two from the Iowa Department of Natural Resources’ Derelict Building Grant Program and one from the Iowa Tourism Grants program. These grants helped fix the roof and spruce up the building’s exterior, which was sandblasted back into the state it was 40 years ago. As part of the DNR grants, Ida Grove took great lengths to ensure everything was disposed of properly, protecting the environment from materials containing asbestos or other harmful components. 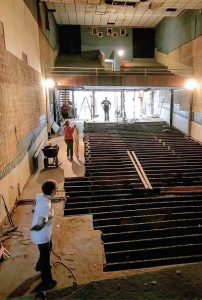 Volunteers turned out in force to help throughout the deconstruction process. The King is being renovated to be more friendly for those who may have disabilities. (Photo provided) 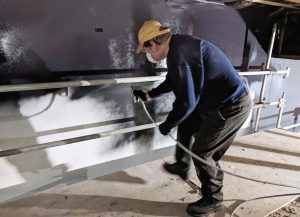 Black paint is applied to King Theatre’s interior as part of the renovation process. (Photo provided) 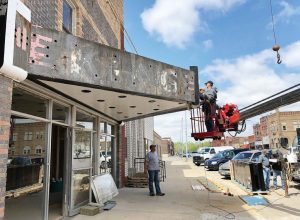 The old marquee is removed from Ida Grove, Iowa’s, King Theatre. The city, seeing the value of a downtown movie theater, took over ownership of the King and has been renovating it. (Photo provided) 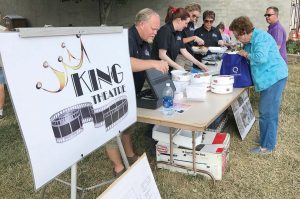 A grill-out was hosted at the farmer’s market to raise funds for King Theatre’s renovation. (Photo provided) 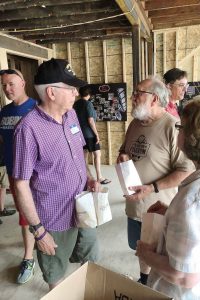 The community has also continued to support the project with a volunteer night this past October, which saw more work done on the theater’s flooring and projection room. Past Odebolt Arthur Battle Creek-Ida Grove Community School District alumni classes have also gotten into the spirit, donating funds toward the renovation — their efforts chronicled on King Theatre’s Facebook page.

“I couldn’t be more happy with how the project is transpiring,” Clough said.

A touching moment came when Clough received a call from Newport Beach, Calif., from a woman who had worked at the King’s concession stand from 1951-56, starting when she was 12 years old. She had been following the city’s progress and shared her experiences working there, including the memory of putting her initials behind the counter.

Little stories like this are just one reason Clough was keen to save the King, which has meant so much to the community for more than a century. “Having a theater does mean a lot to different generations,” he said. “There is a lot of social equity involved in a hometown theater.”

Preserving that equity was important to Clough and the city, with him noting providing social avenues for citizens can be just as important as infrastructure. “You’ve got to preserve a way of life.”