As technology continues to evolve, Magellan and MiTAC Digital Corp. President Pierre Parent spoke with The Municipal on the subject of standouts and how these technologies are making the lives of fleet managers and administrators easier while also encouraging fiscal responsibility. From real-time communication to the neutrality of driver data, Parent takes us through the ins and outs of what fleet administrators can expect in 2019.

Q: Technology continues to make numerous leaps. What have been some of 2018’s standouts that should be on municipal officials’ radars?

A: It is becoming more apparent that real-time, two-way communication with the field is key. Fleets understand that to be effective, their solutions must have communication during the execution, monitoring and management functions of everyday operations, simplifying the managers’ and administrators’ jobs, while increasing the safety and productivity of their drivers.

In addition, we’re seeing topics around the safety and neutrality of driver data coming to the forefront. Questions surrounding who owns the customer, what data can be used and how is data confidentiality preserved are hot topics, and we continue to watch the debate.

Q: How has this technology made municipal officials’ and city employees’ lives easier?’

A: I’d like to discuss real-time, two-way communication, because that is Magellan’s main focus for 2019. Administrators need the ability to keep their drivers locked on route to ensure each driver completes their designated route in the right sequential order, every time. Drivers need the capability of being navigated from point to point, or segment to segment, eliminating paper routes and maps.

This gives drivers the wherewithal to focus on the road and carry out their duties with safety and efficiency in mind. Increased focus on the road means they are less likely to miss stops; however, even if a driver misses or deviates from a stop, the ability to be redirected back to a point or segment they deviated from to ensure near 100 percent route completion is imperative. Fleet managers need a backend web portal that provides them with a comprehensive dashboard to monitor their fleet, manage routes, update vehicle assignments and assign tasks. These real-time capabilities also should provide fleets the ability to push updates over the air, including messages, new routes, vehicle assignments and more. 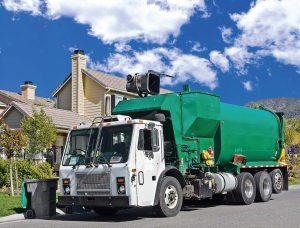 Return to Route means less printouts and training are needed, saving municipalities money. If drivers get off route, audible turnby- turn directions are given to get them back on track. (Photo provided) 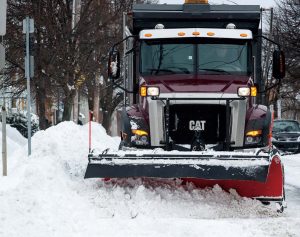 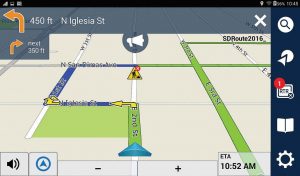 This screen captures how Magellan’s Return to Route can help drivers work around construction and get back on route in a efficient manner. (Photo provided)

Q: Tell us a bit about your return to route technology and how it is being used by municipalities?

A: Magellan’s Return to Route delivers a smart technology approach to designated route management, ensuring experienced, new and temporary drivers complete their road segments or stops in the correct order. All routes can be updated dynamically and over the air from the back-office web portal or directly from the device itself — making it easy for administrators to preschedule and adjust, as needed. Should drivers require a route change, all routes are loaded on the device so the change is quick and easy. The administrators also receive real-time route completion metrics so they can identify problems earlier.

Magellan’s fleet tablet and navigation software are designed for the most challenging city environments, namely complex urban canyon environments. When tested, vehicles equipped with Return to Route saw an astounding 91 percent in overall routing accuracy, as compared to 50 percent accuracy with regular GPS receivers without

Q: What’s one of your greatest success stories when it comes to routing technology?

A: In January of 2016, New York City received a record 27.5 inches of snow, the city’s worst snowstorm in history. Record-breaking or not, that was a lot of snow to remove and it stress tested the Department of Sanitation of New York fleet of salt-spreading vehicles. After that particular storm, city officials sought a solution that would better serve them. DSNY also wanted to modernize its fleet and integrate technology solutions, especially those that aligned with departmental goals of increased safety and efficiency. DSNY began rolling out the Magellan navigators in the cabs of its large and small salt spreaders in December 2017, giving drivers turn-by-turn directions to assist them in quickly getting roads salted and plowed efficiently and safely.

There was a lot of anticipation and excitement to see how Magellan would help DSNY perform during the first snow storm of the season, and the city’s feedback was extremely positive. Drivers came back describing how instrumental the solution was while operating their vehicles in near white-out conditions, where street and signs are sometimes indistinguishable. Overall, in a snowstorm that dropped 15 inches of snow, DSNY was still able to clear the roads, meet its service goals and still log fewer drivers hours than normal for this size storm. DSNY chiefs described the solution as the only technology the department has introduced to receive all positive remarks.

Q: How has your technology been used to cut costs while improving service for constituents?

A: To help municipalities cut costs, Magellan’s Return to Route means that less training is required when using our solution because drivers no longer need to have lessons on reading maps and following routes. When they do miss a stop or segment, they have an audible, turn-by-turn navigation solution that directs drivers back to the point they deviated from, lowering overtime and fuel costs. Fewer deviations from routes also means more efficient salt usage, saving resources and money.

In the case of DSNY, the city was able to increase performance, cut costs and improve citizen’s approval of snow operations. Training times and costs have been cut significantly; new drivers are able to operate as productively as veteran drivers; and the city is easily saving hundreds of thousands of dollars per year thanks to the Magellan Return to Route Solution.

Q: How will technology continue to adapt to users’ needs as we enter into 2019?

A: As cities continue to grow, improvements in safety, service and efficiency will need to grow at the same rate or faster. We are seeing some great technology in the industry coming down the pipeline for 2019. The  integration of data from the cab to back-end simplifies the driver’s job and removes distractions while giving admins a more comprehensive look into what’s happening on the road and in their fleet. This improved communication between drivers and operators will boost operational efficiencies, save on fuel and labor costs, and increase safety.

Pierre Parent is the president of Magellan GPS and MiTAC Digital Corp., a wholly owned subsidiary of MiTAC International Corp. He manages three business teams focused on navigation solutions, including automotive, fleet and off-road. Parent oversees management of all functional areas from product development to marketing/sales/business development to operations and administration. Over the past year, he led the company transition from a retail, B2C consumer electronics business to a software/solutions focused B2B business.