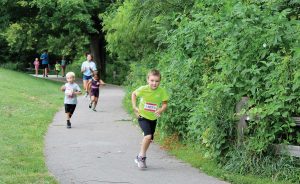 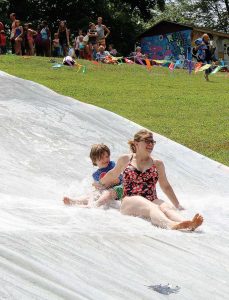 Kids enjoy a Slip ‘N Foam slide, which had been set up at Reverend Ernest D. Butler Park. (Photo provided) 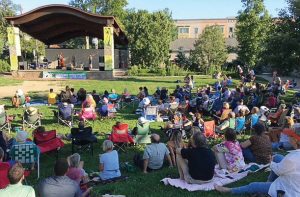 Bloomington’s performing arts series has been a popular addition to its summer, allowing locals of all ages and college students from Indiana University to enjoy a variety of musical and theatrical performances. (Photo provided) 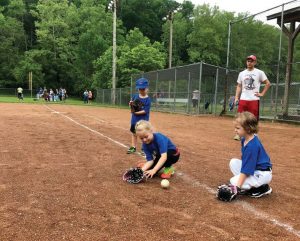 In the summer, young sluggers get to participate in T-Birds Tee Ball at Cascades Park in Bloomington. (Photo provided)

On occasion when one encounters greatness, one can only stand back and marvel at what all it took to achieve the pinnacle, flag in hand.

Such an epitome of excellence has quietly been going on for years in the Bloomington, Ind.’s, parks and recreation department resulting in a slew of honors, awards and nationwide tributes for its — drum roll, please — continuing hard work and high standards.

According to Julie Ramey, community relations manager of the parks and recreation department, the city is again in line for yet another chance at recognition — the Gold Medal Award. The winner of this award was announced Sept. 25, after The Municipal’s deadline.

“The Bloomington Parks and Recreation Department was named a Gold Medal finalist in Category III by the National Recreation and Park Association in 1999, 2002, 2003, 2004 and 2006. The department won the National Gold Medal Award in 2007,” said Ramey, who has been working for the city since September 2002.

Applications are separated into population-driven classes and a final part of the application is a five-minute video, published online. Bloomington Parks and Recreation’s video showcases its programs.

Parks departments are also required to meet other requirements that display how their communities are positively impacted by their services and programming.

The Bloomington Parks and Recreation Department, since winning the prestigious award in 2007, has made substantial improvements since then, including the completion of phase two of the B-Line Trail and the beginning of construction on Switchyard Park.

Currently, there are three other finalists in Bloomington’s division: Evanston, Ill.; Greeley, Colo.; and Lawrence, Kan.

Ramey supervises three employees in the community relations area: a graphic designer; a sponsorship and volunteer coordinator; and a social media specialist, all of whose combined talents make the  parks and recreation department the success it is today.

“The Bloomington Parks and Recreation Department is accredited by CAPRA,” said Ramey.

“We were first accredited in 2001 and have maintained our standards of excellence to be successfully reaccredited every five years since. We also have a current master plan, developed with a significant amount of input from city residents and facility users. The master plan guides the department’s goals and priorities to match those of the community.”

If other parks and recreation departments are considering applying for accreditation, Ramey’s description of her city’s makeup may offer an insight as to why, in part, Bloomington has been a winner so often, and not just in the field of recreation.

“The Bloomington Parks and Recreation Department is an integral part of an innovative and vibrant community,” said Ramey. “The department has dozens of formal partnerships with local businesses, not-for-profits and service organizations that allow us to maximize outreach and serve community members effectively, without duplicating efforts. Our residents, and students, faculty and staff from Indiana University, show their passion for parks and commitment to service by contributing nearly 10,000 hours of volunteer service to our department every year.”

Bloomington’s parks department has been recognized with other awards and honors, too.

“The city of Bloomington has been named a Playful City USA by KaBOOM! since 2008,” began Ramey. “Bloomington was Indiana’s first Tree City USA, a designation awarded by the National Arbor Day Foundation first in 1984 and every year since. Bloomington was named a Bird Town Indiana in 2017 and has been a Gold Level Bicycle-Friendly Community since 2014.

“Bloomington Parks and Recreation facilities and projects have received numerous local, regional, state and national awards as well. The Goat Farm Prairie project — a project to create a native prairie in a fescue field at a local park — received the Clark Ketchum Conservation Award from the Indiana Park and Recreation Association in 2018, and the department’s B-Line Trail, a 3.1-mile former rail corridor through the heart of the city, received a Brownfields Redevelopment Award from the U.S. Environment Protection Agency in 2018 in recognition of superior mitigation and facility development efforts.”

The park also offers a variety of winter sports, including indoor ice skating; lunar — moonlight — skating; house hockey; and a variety of other hockey sign-ups. Crosscountry skiing is popular when it snows in the parks and natural areas.

It is also notable that Bloomington offers inclusive recreation services with reasonable accommodations and instructions on how to request them. These include not only accessible facilities for all ages and abilities, but also equipment such as wheelchair-accessible surfacing on playgrounds, in shelters and on trails; modified swings with back and armrests for children with disabilities; and zero-depth entry areas and chair lets at both of the parks department’s outdoor pools for patrons who require assistance to enter the water.

Ramey summed up the essence of the city’s parks with a heartfelt tribute from a parent concert-goer.

“The performing arts series is a community staple that showcases the best local and regional actors, bands and musicians and is thoroughly enjoyed by a huge variety of people, from college students to retirees to parents with young families. One concertgoer told us, ‘Our family loves these concerts! Some of our best memories with our kiddos and community of friends have been formed there. Every year we look forward to them. Thank you so much for organizing and keeping them going. These concerts are one of the top reasons we love living in Bloomington. Thank you so much!’”