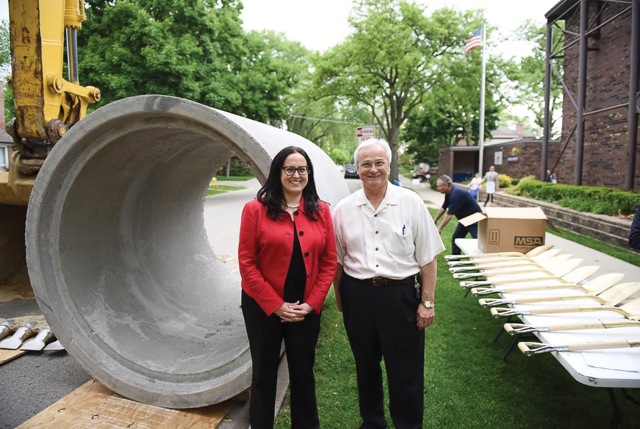 MWRD President Mariyana Spyropoulos and village of Niles Mayor Andrew Przybylo stand before some of the giant storm sewer infrastructure that was installed to provide flood relief to Niles. (Photo provided)

The village of Niles, Ill., and the Metropolitan Water Reclamation District of Greater Chicago earned the Public Works Project of the Year award through the American Public Works Association Chicago Metro Chapter for their partnership on the Cleveland Corridor sewer project. 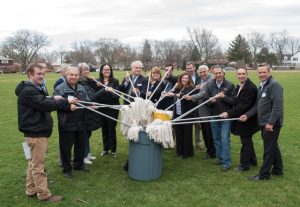 A ribbon-cutting-style ceremony was held on March 29, 2017, at the Grennan Heights Gym, 8255 N. Oketo, Niles, Ill. The traditional scissors and ribbon were replaced with a ceremonial “Throwing of the Mops into the Trash,” an act symbolic of the hundreds of homeowners that would experience mitigated flooding risk as a result of the largest infrastructure project in village history. (Photo provided)

The APWA Public Works Project of the Year Award was established to promote excellence in the management and administration of public works projects by recognizing the alliance between the managing agency, the consultant, architect or engineer and the contractor who, working together, complete public works projects.

Awards are given in four divisions, depending on the price point of the project, and five categories: structures; transportation; environment; historical restoration or preservation; and disaster or emergency construction or repair.

As part of the MWRD’s 2014 public call for communities to submit project ideas pertaining to local flooding issues, Niles submitted the sewer on Cleveland Street.

“When the project was submitted, the design of the solution had already been created, so MWRD became a funding partner for the village,” Allison Fore, with the Public and Intergovernmental Affairs Office of MWRD, said. “After the project was selected, MWRD reviewed the design to ensure it was fulfilling the intended stormwater benefits and inspected the project at its completion.”

The Cleveland Corridor project involved the installation of a new storm sewer with a 72-foot main line along Cleveland Street, branching out to adjacent side streets. The project also included the installation of a relief sewer to capture stormwater runoff and convey it to a new outfall to the North Branch Chicago River. In total, approximately 11,200 feet of new storm sewer was installed, according to the village of Niles’ community website. 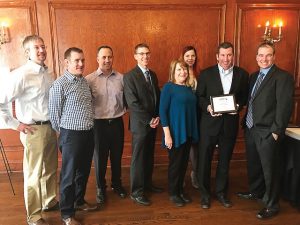 The project totaled about $9 million, and costs were covered by $2 million from MWRD in addition to utilizing low-interest Illinois Environmental Protection Agency loans to reduce the project costs.

The project was ultimately selected, Fore said, due to the scope of the impact it would have on the community and the goals of the MWRD.

“The MWRD strives to provide as much flood protection as possible based on criteria such as number of structures receiving benefits and total construction dollars and funding amount requested,” she said. “This project provided direct flood relief benefits to approximately 140 structures.”

Most of the construction was completed by November 2016, with minor additions continuing through the end of the year. The project reduced surface water flooding, which has led to repeated overland flooding in this area, and damages while also greatly improving the village’s drainage conditions.

As part of the partnership between the village and MWRD, basic maintenance and annual inspections are required.

“The village of Niles is required to complete an annual inspection signed by a professional engineer licensed in the state of Illinois and provide that to the MWRD,” Fore said. “We can also complete our own inspection if necessary.” 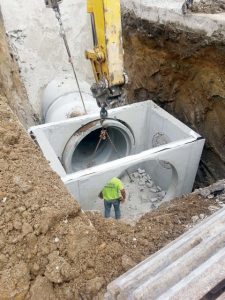 According to MWRD President Mariyana Spyropoulos, earning the Public Works Project of the Year award is an honor and a privilege and could not have happened without a number of key players and partnerships.

“We are happy to receive this recognition, and we look forward to a more resilient future thanks to this award-winning project,” she said in an emailed statement relayed by Fore. “I would like to commend Mayor (Andrew) Przybylo, the Niles Board of Trustees, Chairman Joe LoVerde and the Niles Stormwater Commission, the IEPA, Cook County Forest Preserve District and our stormwater engineers at the MWRD for their collaboration on this project and their urgency in preparing for the next storm. It’s partnerships like these with Niles that we treasure as we work toward solutions to flooding all across Cook County.”

While the completion of the Cleveland Sewer project in itself is a win for both the village and the overall Chicagoland area, the MWRD has more work to do. In terms of future plans, Fore said the MWRD has strong and impactful partnerships across Chicago and the surrounding area, and a number of projects are in the works.

“The MWRD provides stormwater management services to over 125 communities across Cook County,” she said. “We’re actively partnering with dozens of municipalities and other local governmental organizations on projects similar to the village of Niles’ Cleveland Street sewer project to provide flood relief to residents throughout the Chicagoland region.”