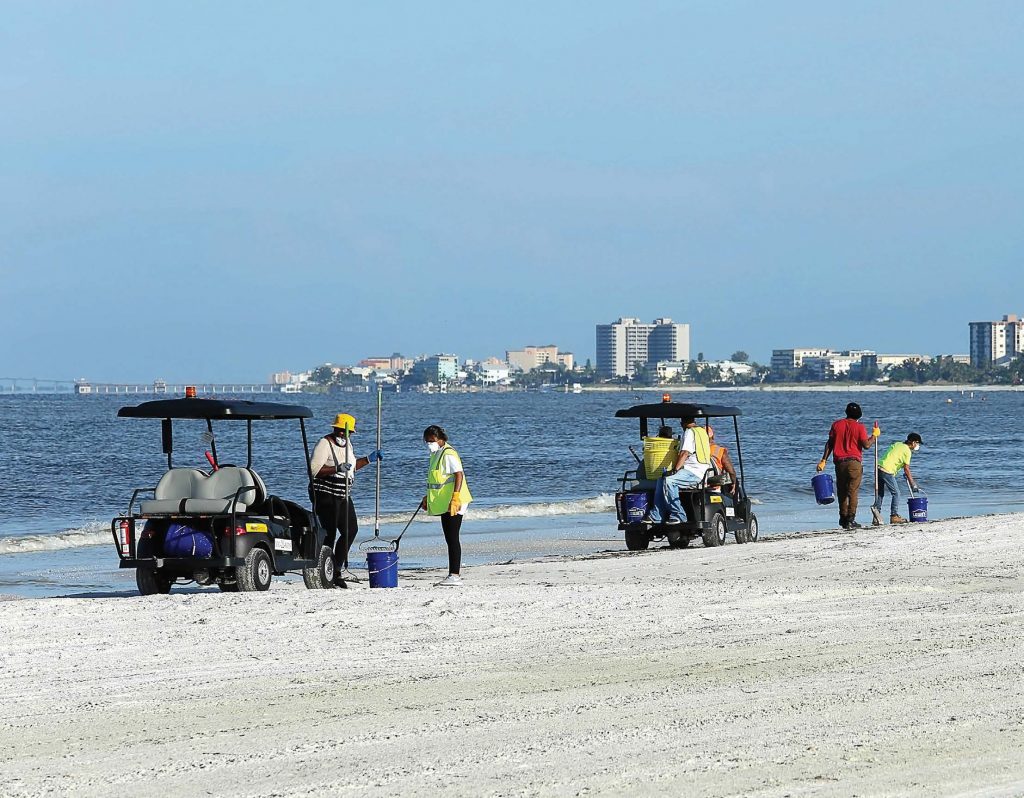 This summer, tons and tons of dead fi sh and other species of sea life piled up on a portion of Florida’s west coast. This included a 400-pound goliath grouper the size of a small motor vehicle, small bait fish and several different types of crab.

This is all due to a combination of red tide, a common term for a harmful algae bloom, and what is being called a blue-green algae, a different type of harmful bloom. Red tide is common in this part of Florida, and it usually causes some dead fish but nothing close to this magnitude.

“A few weeks ago we were out on the water and we even saw a few dead, floating sharks, which apparently is a really bad sign because the sharks are usually able to fend for themselves pretty well,” said Molly Schweers, a communications specialist with Lee County’s solid waste division. “Th ere’s even been a couple of dolphins and a sea turtle.”

The fish were so sick that even seagulls would not eat them. This left the disposal process up to the community.

“This is Florida and people come down here for our beautiful beaches and they’re not beautiful when they’re covered with dead fish,” Schweers said. “That’s the problem.”

It got so bad, that the area was in a state of emergency, and all hands were on deck. Even local residents chipped in to pick up dead fish. One of the first things the solid waste division did was put dumpsters in a variety of locations throughout the beach. That way residents had a place to throw dead fish since the average garbage can did not stand a chance.

In total at the time of press, she said that her department received 1,472 tons from collected dead fish from the beach and sea. This included sand, which was often scooped up by front-end loaders picking up fish. Whether or not sand was collected with the fish determined how the solid waste department could dispose of it.

Since sand is noncombustible, Lee County opted to take fish that were collected with a significant amount of sand to the landfill. This was done so as not to wreck its burner unit. (Photo provided) 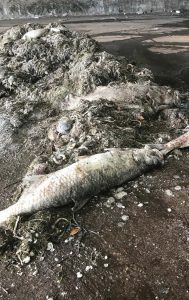 Lee County alone received approximately 1,472 tons of dead fish, which were collected from the beach and sea. (Photo provided)

The ideal disposal method for the inordinate amount of dead fish that washed up on Lee County’s shore was to burn it, Schweers said. This allowed the fish to be taken care of quickly while also producing energy through the county’s waste-energy equipment. “The only decision for us was what is the most practical disposal method,” she said.

“When they were coming in with a bunch of sand — sand is a noncombustible — so of course they don’t want to gunk up our burner unit.”

When loads of dead fish were collected with a significant amount of sand, it was taken to a landfill, where the fish would quickly decompose. If there was not much sand, the fish was added to flammable trash in order to increase its burn value.

In order to limit the amount of sand that was collected, on Aug. 16 Lee County purchased two surf rakes, which is a piece of equipment designed to comb through the beach and pick up unwanted material. Each machine cost the county $60,000. The surf rakes were then used by the parks and recreation department to pick up as much dead fish as possible.

“Our parks and recreation department has been very involved in identifying where the collection needs to happen next and getting both workers and volunteers out there,” Schweers said.

For as bad as the problem was, her department does not intend for it to happen again next year.

“The last instance was 30 years ago,” she said. “It’s summer, we have to prepare for hurricanes. It’s just a different kind of situation here.”

Instead, the department’s goal was to solve the problem as quickly as possible, so that the residents could move on from it.

“This perfect storm with the red tide and the blue-green algae at the same time is not common in these parts,” Schweers said. “Pretty quickly it became apparent that it was going to take an extraordinary response effort.”

Thanks to county municipal workers and beach residents, the dead fish problem was taken care of in a few weeks, and the area returned to normal — with enough time to focus on more common natural phenomenons.