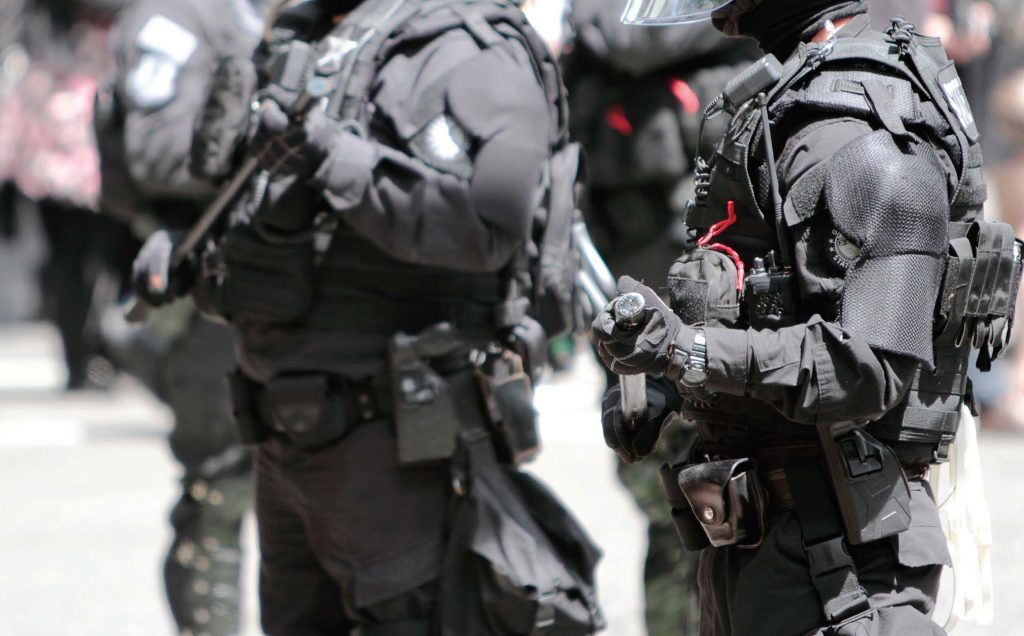 The militarization of police has been a heated topic for some time, with a recent
study finding more militarized departments did not receive as much support from the public as those that weren’t. Improvements in ballistic-resistant technology are better protecting officers while also looking less militaristic. (Shutterstock.com)

The world has never been a safe place, but nowadays, threats are emerging in places that decades ago would have been unthought of: schools, movie theaters, clubs, boardwalks, malls and anywhere people gather. Law enforcement officers have also found themselves targeted.

From Jan. 1-Aug. 21, 38 officers — including K-9s — have been killed in 34 states, according to the National Law Enforcement Officers Memorial Fund website. It is an already 23 percent increase over 2017’s firearms-related casualties during the same time frame. Ambushes have also grown in prevalence. In 2016, USA Today reported the number of ambush-style killings of police rose 167 percent.

In the midst of this uptick, Keith Brown — who has more than 30 years of experience in EMS and law enforcement, serving as a Cedar Rapids, Iowa, police officer for 11 of those years before retiring — considered ways to improve the safety of officers not only in their patrol cars, but also when they leave them. “I started in late 2015 trying to come up with something. I was working in the law enforcement equipment field at the time, and I wanted to come up with something that officers could quickly access for protection.” The end result? “I came up with a floor mat made of ballistic material.”

While pitching the floor mat, which pairs ballistic material with WeatherTech, Brown noted he received some skepticism; after all, shooters likely aren’t going to be shooting up through the floorboard. But Brown’s creation doesn’t have to stay in the vehicle, rather it goes with officers when responding to a variety of incidents, from suspect  pullovers to active shooters, as the floor mat doubles as a ballistic shield.

“It’s right there under their feet,” Brown said, noting Attack Mats features integrated handles that offer stability when the mat is used as a shield. “It’s very light weight, less than 7 pounds. They can grab it by the handles, and they can run seven blocks if needed.”

Despite its light weight, the Attack Mat can stop bullets fired from .45 caliber to .40 caliber weapons, plus 9 mm bullets and .12 gauge slugs, living up to its tagline, “Protecting those who serve worldwide.”

Ballistic resistant materials, in general, are getting thinner and smarter, with innovation having been stoked by experiences gain in Afghanistan and Iraq. 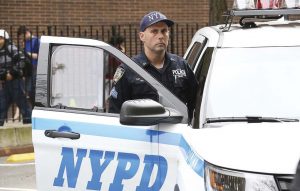 The armor blends in to this New York City Police Department squad car, with most of the general public being unaware of its existence. It’s presence, however, provides security for officers using the vehicle. (Photo provided by Hardwire) 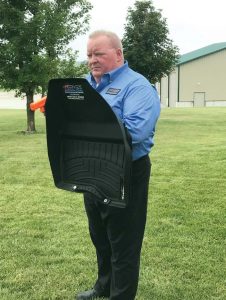 Keith Brown holds his invention, Attack Mats, which is a floor mat that doubles as a light-weight ballistic shield. Still functional as floor mat, it is easily accessible should an officer need it while responding to a call. (Photo provided) 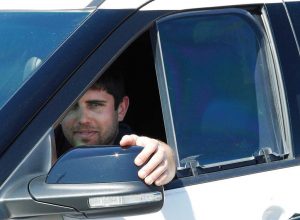 With the increase in ambush-style shootings of police officers, transparent armor window inserts allow officers to work in their squad cars safely, whether on patrol or completing paperwork. (Photo provided by Hardwire) 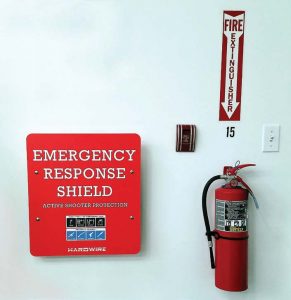 Much like a fire extinguisher, an emergency response shield can be placed in a building in case of an active shooter. They can be labeled as such, above right, or concealed as artwork or an advertisement, like this “Seacrets Hand-Crafted Gin” sign, above left. (Photo provided by Hardwire)

Hardwire specializes in armors and has served as a military contractor, experiencing the first surge into Afghanistan during which it worked on mine-resistant ambush protected military vehicles, adapting to protect soldiers from enemy combatant’s tactics. At the height of the surge, Tunis said the company was armoring 125 big trucks a week. When the war cycled back down, Hardwire saw the opportunity to apply its ballistic knowledge back at home. This has included body armor plates, bulletproof clipboards, tactical ticket book inserts, tactical shields, molded vehicle door armor and transparent armor window inserts for law enforcement agencies.

Much has been written about the militarization of police, particularly about the negative impact such efforts can have on the relationships between a department and its community. A recent study published by Jonathan Mummolo, an assistant professor of politics and public affairs at Princeton University, in August gave participants a fictitious news article where a police chief argues his department deserves a larger budget. The article was paired with one of four photos, featuring different groups of police officers.

The photo with a military-style armored vehicle “caused support for police funding in the United States to fall by roughly four points in the (online) survey, and two points in the SSI (Survey Sampling International) survey.”

Mummolo also found in the latter survey the same image brought “a 3.2 point drop in respondents’ desire for more police patrols in their own neighborhoods.”

But, Tunis is quick to state, “We don’t want to militarize the police.”

Rather, Hardwire’s focus has been on blending armor into vehicles and other equipment to the point most people wouldn’t even know it was there, which can alleviate tension.

Armor benefits officers by providing them with a sense of security and a calmer state of mind. “Slower reactions are safer for the police officer and safer for the public,” Tunis said, noting police know they are protected and their armor can take the first round, the second round, and so on. “You can better assess the situation: Was that a stray bullet?

Was that intended for me? It allows officers to be better at their job — 99 percent of the job is to help if something happens.”

Tunis added, “It’s not just an illusion of security, so they can act differently.”

Without that security, an officer can get nervous, leading to a weapon being discharged when unnecessary. “As an engineer, I want to subtract bullets from the situation,” Tunis said. “If there are fewer bullets, there are fewer wounded people on both sides.”

Both New York City and Philadelphia police departments utilize armor in their vehicles, with Tunis noting it is neat  seeing his company’s product in the numerous squad cars posted at Times Square — something most people don’t even know; however, it is there protecting officers against ambush-style attacks. Tunis said, “There is no reason why any police officer should not have ballistic window inserts — no reason.”

Not just the public safety sector

The same article notes, “The demand for body armor and personal protection equipment is expected to be driven by modernization initiatives undertaken by various defense forces and law enforcement agencies across the world, and internal security threats, such as terrorism, insurgency and organized crime.”

Tunis said, “Body armor has gotten so thin, it’s going to make it to the consumer level.” He added it is becoming wearable to the point people might even struggle to tell whether someone is wearing it or not. Comfort is also factoring in. “It will come down to the human body.”

In addition to becoming form fitting, he forecasted body armor will become more affordable, possibly reaching the same price as a pair of new sneakers.

Tunis’ daughter, who is going off to college, has shown an interest in consumer armor, particularly in an armored pea coat. “She said, ‘Dad, this is cool.’ When your daughter says (what you’re doing) might be cool, it just might be cool — normally, what dad is working on isn’t cool.”

Body armor is just one form where ballistic material is being applied in the consumer market. There are now ballistic backpacks, briefcases and computer bags. And much like Brown’s Attack Mats, there are everyday items now doubling as ballistic shields, such as whiteboards in the classroom — something Hardwire would like to get into every school across the U.S.

“The Sandy Hook shooting happened and we looked at the speed in which it happened — three minutes,” Tunis said. “If teachers didn’t have armor right there, they couldn’t get to it.”

Like a fire extinguisher, the shield needed to be right there in the classroom, which is how the whiteboard ballistic shield came into being — serving a practical use in the classroom most days while being ready to save lives in a worst-case scenario that you hope never happens.

“It took off,” Tunis said, noting they are receiving calls from all 50 states. “It’s something that is becoming much more mainstream.”

Teachers with the whiteboards in their classrooms have repeatedly responded they feel empowered. “We’ve heard it in Alaska, Minnesota and the Carolinas,” Tunis said. “An empowered teacher is a better teacher.”

Similarly hidden ballistic shields are making their ways into other public spaces concealed as informational signs or even artwork — some are marked as emergency response shields. Tunis noted a night club has put 25 such shields throughout its complex, with waitresses and waiters knowing their locations.

Taking a lesson learned from a four-star general in the Army, Tunis stated, “Armor is really about making it harder for the enemy; it makes it easier for interdiction.”

In terms of the wars in Afghanistan and Iraq, better armoring soldiers and military vehicles forced enemy combatants to shift to bigger bombs and weapons, which increased the odds they would be spotted by drones before they could complete their objectives. The same principle applies at home. Armor will require would-be shooters to adopt longer guns, which will be more easily spotted.

“My job as an engineer is to solve this problem,” Tunis said, noting as personal protection gets more pervasive and makes it harder, America will become safer. “This problem is epidemic — it’s pandemic at this time — and it’s all over the world.”