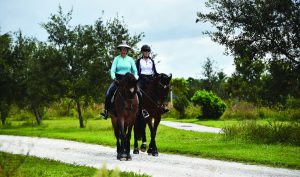 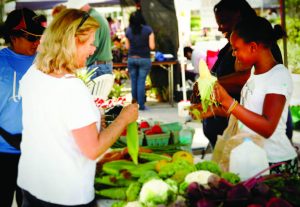 Its farmer’s market is just one draw for people of all generations to move to Wellington, Fla. (Photo provided) 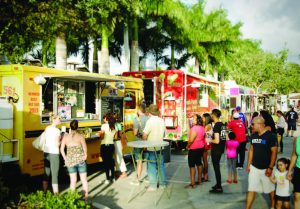 People line up at a variety of food trucks to sample their wares during a concert at the Wellington Amphitheater. (Photo provided) 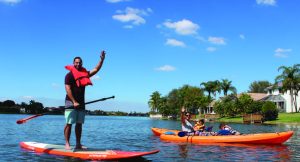 Residents turn out to enjoy the water during Wellington’s Lakeside Family Fun Days. The village has been branded as a great family community with great schools, parks, etc. (Photo provided)

Great weather, location and a high density of amenities and resources for all ages make the village of Wellington, Fla., an attractive spot for young families and seniors alike. Wellington is west of West Palm Beach in central Palm Beach County.

The village of Wellington operates under the council/manager form of government where elected officials are responsible for legislative functions such as establishing policy, passing laws, establishing the budget and setting the community vision.

Speaking of vision, if there’s one consistent theme in Wellington’s three-decade history, it’s an intentional approach to growth. According to Assistant Village Manager Jim Barnes, the village has grown in land size and population.

The secret is out. People and businesses have recognized Wellington for its all-ages appeal and that’s not expected to wane anytime soon; after all, in 2010, Money Magazine named it among the 100 best places to live.

Over the past few decades, many commercial developments have come to fruition, but Wellington is still a largely residential community. According to Barnes, that’s part of its charm.

“As such, it’s branded itself as a great family community with great schools, parks, etc.,” he said.

The demographics tell that story, with the median age being around 40.8. Barnes said many couples just starting out seek out Wellington as a destination to raise children. And seniors also look to this south Florida village as a hotspot for retirement — many of whom are looking to “age in place,” as Barnes put it.

To that end, the village of Wellington is charged with being responsive to the needs  of all the generations through various programs and initiatives. Being largely suburban, it doesn’t have the same amenities as a large city — and that’s OK.

“We’re never going to be a dense urban center,” he said. In listening to younger residents, he added that people want greater sustainability and walkability to amenities. To that end, he anticipates the growth of destination retail centers.

Still, he pointed out that Wellington has an impressive number of attractions and entertainment options, which make it “relevant and competitive.” One draw that is largely unknown by outsiders is Wellington’s vibrant equestrian scene, a tourism cash cow. Jockeys and their families come to Wellington from all over the world to compete and enthusiasts flock to watch. Each year from January through April, a wave of over 250,000 visitors descend on Wellington for its Winter Equestrian Festival.

According to data supplied by the village government, the equine industry adds $150-200 million dollars a year to Palm Beach County’s economy. There are approximately 6,500 horses in the county — out of 500,000 in the state. The winter season in Palm Beach County experiences a large expansion when equestrian events are held, and the number climbs to over 13,000 horses. Approximately 8,000 acres of land are used for horses, with a majority reported in Wellington for polo and professional horse jumping events. In other words, horses are big business for Wellington. In Barnes’ words, “It shapes our culture and business community.”

But there’s more to Wellington than its equestrian facilities. In recent years, residents have enjoyed the introduction of a robust farmer’s market, renovated village hall and community center, 9/11 Memorial, barrier-free playground, pool, amphitheater and more.

To understand this trajectory, you have to look to decisions made nearly a decade ago.

“A lot of that stuff we decided to do in 2009-10,” said Barnes. “We consciously made a decision to invest as a government in the community. We put our money where our policy is.”

He said the response from the public has been largely positive because residents don’t have to leave the village to recreate, socialize or be entertained.

Looking to the future, Barnes said decisions will be made in light of preserving the culture they’ve worked hard to build.

“I think in general we like what we have, but we’re trying to figure out how to keep it. We might have to change a little so we can stay (mostly) the same.”