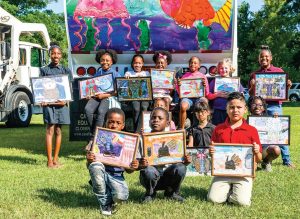 Winners of the “Keep the Green in Greenville” poster competition for young pupils in Pitt County pose with their paintings. Paintings were then enlarged and placed on sanitation trucks to increase awareness of environmental concerns. (Photo provided) 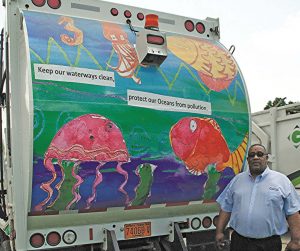 If there’s one thing Greenville, N.C., Sanitation Engineer Delbert Bryant can do knowledgeably, it is talk trash. 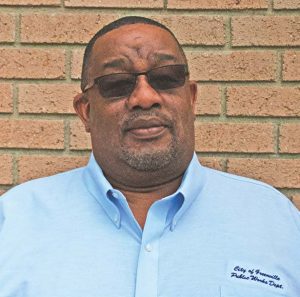 While he initially wanted be a teacher and an animal/crop farmer simultaneously as a child, Bryant ultimately pursued a lifelong career in sanitation, starting in his hometown, Kinston, N.C. Bryant then came to Greenville — population of 67,453 as of 2016 — in November 2007 to advance his career and “work in a city that is growing very fast.”

The biggest challenge of his current job in Pitt County is consistently meeting the daily demands of solid waste collection, Bryant said, adding that Greenville produces 30,000 tons of garbage a year.

However, his position does offer opportunities for fun interactions with the community. Bryant is one of the chief initiators, along with Public Works Director Kevin Mulligan and Recycling Coordinator Cheryl Tafoya, of a public art recycling program.

“The city of Greenville has very responsive youth networks (and has) individuals and university students who regularly volunteer to participate in green activities and beautification projects all over the city,” Bryant said, adding that he frequently sees students practicing green efforts such as recycling, picking up trash, collecting bottles and other items.

This was the fourth year that Greenville’s public works department held its annual  “Keep the Green in Greenville” poster competition for young pupils in Pitt County. The idea behind this was to start kids early in life to be environmental watchdogs, such as habitually picking up litter and recycling — a conscientious lesson in life, no less. The contest winners had their artwork enlarged and colorfully painted on a sanitation truck for their friends and the city to see every day.

Recycling, for Bryant, begins at home. He and his wife, Clarice, who celebrated their 32nd anniversary this year, were blessed with five children — Dreneé, Danielle, Devin, DeAndria and Donathan — and three grandchildren. The Bryants have instilled good habits in their progeny when it came to recycling at a young age, and the kids have served as good role models for their friends and others.

“Recycling, composting and reusing are common practices in our home,” said the proud parent. “Our grandchildren, when they were 2 and 3 years of age, knew the recycling container and what went in it. And Sanias, our other grandchild, is 11 now and is an avid plastic bottle recycler.”

Bryant was asked what other projects, if any, the sanitation department held to encourage residents to keep the city green.

adding that the city’s response has been very enthusiastic and positive for improving aesthetics throughout its neighborhoods.

“The ‘tip’ is focused on eliminating potential mosquito breeding sites around the home, such as emptying bird baths, flower pots, tarps, buckets and toys that hold water each week, and the ‘toss’ is throwing away items that hold water that have no use,” explained Bryant.

“The Landfill Harmonics features a children’s orchestra in Paraguay, which performs with materials recycled from a trash landfill near Asuncion, Paraguay. All instruments are made from items scavenged from the trash.”

Bryant is most proud of several components of his job as sanitation engineer. 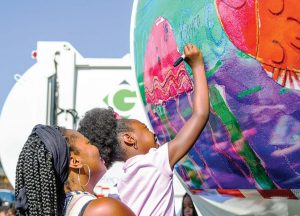 A young artist signs her painting on the back of a Greenville, N.C., sanitation truck. (Photo provided)

“I am happy of my many positive relationships built with elected officials, city and public officials, citizens and co-workers from providing solid waste services over the past several years,” Bryant said.

He added, “Solid waste is rarely at the forefront, but it is vital to everyone in many more ways than most people acknowledge or give recognition to.”

“I am a really good cook,” admitted Bryant, “and this is not just by my account but sentiments of many others. I am known best for my meats — grilled meats — whole hog barbecue, grilled chicken, ribs, fish, shrimp, burgers, chops and steak.

“The grill does figure in most of my cooking,” he added. “I usually cook the meat dishes for family gatherings, holidays and birthday parties. I have many compliments for my eastern Carolina-style chopped barbecue pork, barbecue chicken and barbecue turkey. When time permits, my wife and I assist with a local catering company. My wife really gets the most raves. When people eat her cakes and desserts after the main course, my delicious meats are an afterthought. Her cakes and desserts have won several baking contests. Many people prod her to consider a baking business when she retires. I don’t mind her taking center stage.”

Beyond barbecue, there is another subject he is hooked on: fishing. This passion has even involved deep sea time in 2016.

“The biggest fish I ever caught was a 40-pound wahoo, using ballyhoo for bait,” said Bryant, adding that the scombrid, a very large member of the mackerel family, was caught using a downrigger in the Gulf Stream/ Atlantic Ocean.

“It took 30-45 minutes to land, and afterward, it was grilled and eaten with great pleasure.”

Bryant is a member of St. James African Methodist Episcopal Church and also enjoys pastimes such as traveling — with trips spanning up and down the East Coast, from New England to Florida — and watching high school and college sports.

Finally, Bryant shared some of his personal philosophy.

“The truth is that there is nothing noble about being superior to someone else,” said Bryant. “As civil rights leader Whitney Young said, ‘The only real nobility is on being superior to your former self.’ Being able to look at yourself, your actions and your reactions and modify them when needed to bring joy to others is a wonderful characteristic to possess, especially when done without causing harm to anyone, including yourself.”

Admitting that the mistreatment of others and wasting resources easily moves him to tears, Bryant shared the best piece of advice given to him:

“All work and no play is certainly not the best formula for enjoying your family.”