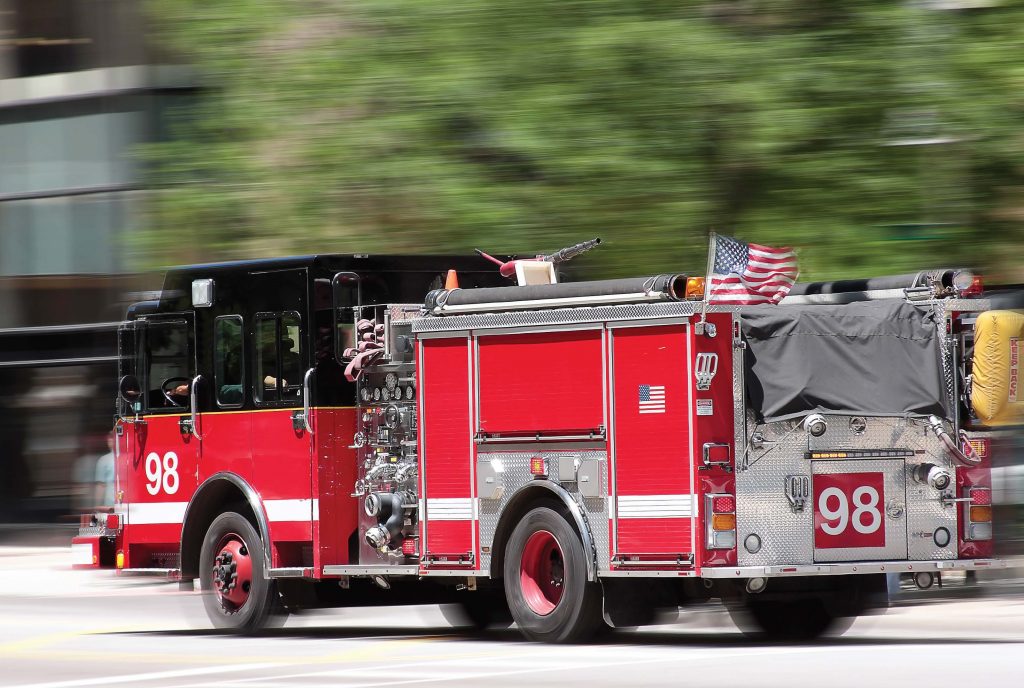 When planning road alterations, the inclusion of emergency personnel in the process can save a lot of headaches in the future, whether those changes are a roundabout, speed bump, rumble strip or reduction in road size.(Shutterstock.com)

Roundabouts are associated with a long list of benefits to municipalities: increased safety for both pedestrians and motorists at intersections, improved traffic flow, reduced injury crashes and the opportunity for beautification in the heart of cities, to name a few.

The feature is recognized across the board as one of the safest types of intersections a city can have, but that’s not the only reason they’re popping up more and more frequently across the nation, especially in the last decade. According to data from the Federal Highway Administration, the conversion of signalized intersections to roundabouts not only decreases traffic-related fatalities by 90 percent, but increases road capacity by 30 to 50 percent.

“People tend to die at intersections one of two ways: head-on collisions or broadside crashes. Roundabouts virtually eliminate the possibility of those two types of accidents,” said Craig Bryson of the Oakland County Road Commission in Michigan. “Of course, we like them for safety, but secondly, if we can increase road capacity by building a roundabout and not having to widen the road, that’s a huge savings for us.”

Cost aside, roundabouts are a convenient way for cities to direct the flow of traffic without being too disruptive of an already-established traffic pattern. But, is this the case for all users of the road? Emergency response vehicles, which tend to be very large and have wide turn radiuses, present a unique situation to city planners incorporating roundabouts on popular response routes.

Bryson said cities recognize the challenges emergency vehicles might face and take measures to ensure the length and turn radius of the trucks are taken into consideration.

“When we’re looking at a design, we always take into account the needs of emergency vehicles,” he said. “From a design standpoint, that would most critically be the large firetrucks, so even our smallest roundabouts are designed with them in mind.” 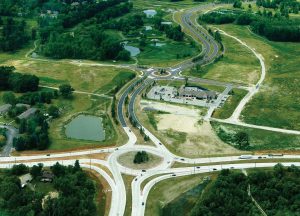 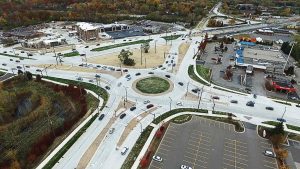 Roundabouts are often designed with larger fire apparatuses and commercial trucks in mind, with special attention being paid to the width of thru lanes and the layout of curbs. Pictured is the Northwestern Connector Triangle in Oakland County, Mich. (Photo provided)

Features added to roundabouts to cater to the needs of emergency vehicles include large turn radiuses, width of thru lanes and special attention paid to the layout of curbs.

“The curb is sloped on the inside island so vehicles can drive on it. That’s intentional so larger vehicles, whether they’re emergency response vehicles or large commercial trucks, have the ability to compensate for a sharp turn by driving on the island,” Bryson said.

Derek Leuer of the Minnesota Department of Transportation echoed Bryson’s points, adding that roundabouts in some cities are already extra wide due to the nature of the vehicles regularly on the road.

“In Minnesota, most roundabouts are designed to handle large tractor-trailer combos. Most fire trucks usually fall within the turning radius of these other large vehicles,” the safety planner said. “If there are special considerations, those should be vetted and handled during the design phase.”

But even despite the best attempts of cities to accommodate all motor vehicles, sometimes the efforts fall short. For the average driver, a roundabout is just another feature of their daily commute. But for operators of emergency vehicles, the addition of a roundabout on their route can impact response time and make navigation tricky.

“I generally tell the people I train to get in and out of a roundabout as quickly as they can,” he said. “But that’s not always easy. Some of the trucks, especially fire trucks, are between 50 to 60 feet long, and you don’t want to drive something that big around a roundabout too quickly. The way they’re designed, you’re pretty much pinned in. The turn radius for some of our trucks is so wide that there’s no way for them to gracefully move through the traffic circle.”

Wilbur said that drivers of emergency response vehicles are held to a higher standard than the average driver, but roundabouts often cause them to be put into less-than-desirable situations.

“Some roundabouts are wide and can handle the size of an apparatus that we’re bringing through, but many more cannot,” he said. “Trucks end up having to drive on outside curbs or drift around the circle to get through.”

Roundabouts aren’t the only modern roadway addition that present challenges to emergency response vehicles, however.

“Speed bumps, rumble strips and the recent trend of shrinking streets all hinder us doing our job,” he said. “The best thing a city can do is consult closely and regularly with their emergency response teams before altering the streets.”

So, what should a motorist do when they see lights and sirens behind them in a roundabout?

“If you’re in a roundabout and see an emergency vehicle coming toward you, get out as soon as you can,” Wilbur said. “Whatever you do, don’t pull onto the roundabout’s shoulder — that doesn’t give us enough room. Exit the circle and simply pull onto the shoulder like you normally would.”