↓
Home→Public Safety→While the day-to-day responsibilities of a fleet manager may not be glamorous, their contributions can be incredibly valuable.

While the day-to-day responsibilities of a fleet manager may not be glamorous, their contributions can be incredibly valuable. 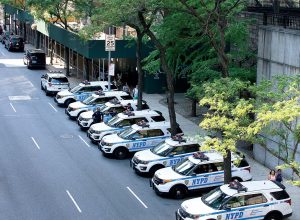 The New York City Police Department strips its vehicles before they go to auction as the department always needs spare parts on hand.(Shutterstock.com) 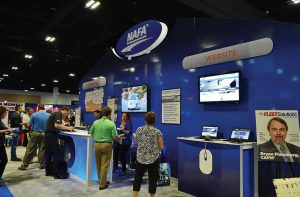 Fleet organizations like NAFA can be invaluable when hunting for cost-saving methods as they allow fleet managers to network and compare notes. Pictured is NAFA’s booth at the 2017 NAFA Institute and Expo. (Photo by Sarah Wright) 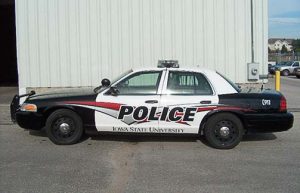 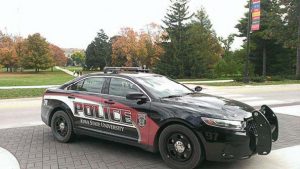 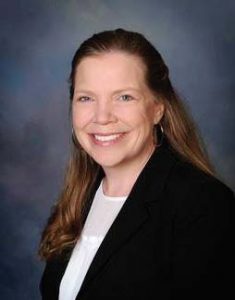 Take Kathy R. Wellik, CAFM, director of transportation services with Iowa State University and a board member for NAFA Fleet Management Association. Her job is to provide safe, economical transportation to university faculty and staff to help them get their job done. She is in charge of hundreds of vehicles, but, perhaps unfortunately for her, she’s not given some lavish budget to outfit them with sleek designs or fancy gadgets. Instead, her objective is to save as much money as possible and, essentially, turn a profit.

“We are a self-funded unit,” Wellik said. “So the university doesn’t just drop a bunch of money in our hands and say ‘here, run the fleet.’ We generate our own income by renting vehicles out. We have about 618 vehicles. I do the buying, the selling and the renting of the vehicles. We even have our own shops.”

One department she works directly with is Iowa State’s Police Force. In fact, she gave a talk on how to implement cost-saving initiatives for police fleets at the 2017 NAFA Institute and Expo last April. Her talk was juxtaposed with a fleet manager for the New York City Police Department, so those in attendance could compare and contrast the differences in managing the two fleets, which are quite different in size.

“It was different case studies on cost-saving initiatives for a police fleet,” Wellik said. “The NYPD presented and then we presented. There you have a huge police force vs. our smaller, on-campus police force. The savings are different. With our presentation, we did an overview of how many police vehicles we have. Then we talked about the different areas we can save.”

Currently, the police department at Iowa State has three Explorer Interceptors, four Taurus Interceptors and a couple of undercover cars. Unlike the NYPD, Wellik intends to make a fair bit of money when it’s time to resell her vehicles at auction.

The NYPD generally saves a majority of the equipment from its vehicles before selling them because it always needs to have enough spare parts on hand.

“So for them, when they go to sell their vehicles, there’s not much left,” Wellik said.

“They take every part they can because they have so many vehicles and so many incidents that occur that they basically strip that vehicle before it goes to auction. Whereas we’re trying to make it nice so it can be sold to a (different department).” However, that doesn’t mean Wellik and her team don’t reuse parts to save money. She will reuse equipment in up to three different police vehicles, including cages, computers, lights, sirens, holding cases and more.

“We do not buy new for every one of them,” she said. “We go to the upfitter and basically they are taking it off of the old and putting it on the new.”

Another way Wellik has been able to improve the resale of her vehicles is by choosing an all-black paint scheme for her vehicles. For instance, at one point she used to purchase two-toned police vehicles; however, when it came time to put the vehicles up for auction, no one wanted to buy them.

“Instead (for the all-black vehicles), we just used vinyl wrap to get the logo and stuff on there,” she said. “The new paint scheme really helped us bring in more money when we’re reselling the vehicles.”

What’s more important for Wellik is that she establishes good relationships with her police department by helping it save money. It has a fairly small budget as well, so it appreciates any money that it can save.

Something both large and small fleet managers can do is join organizations such as NAFA, which Wellik said is integral to her success.

“I think the networking is so important,” Wellik said. “Being able to have those people who you can call and know that somebody’s out there to help you. With NAFA, you just build relationships and you can idea share, and it’s targeted towards the same people who do what you do every single day.”

It’s also important to be a part of an organization like NAFA because the landscape of managing a fleet is changing rapidly.

“A lot is changing in the vehicle industry with autonomous vehicles and mobility management that being able to get from point A to point B might be drastically different than what it is today five years from now,” she said. “(NAFA is) really working hard to align themselves to keep up with that technology.”