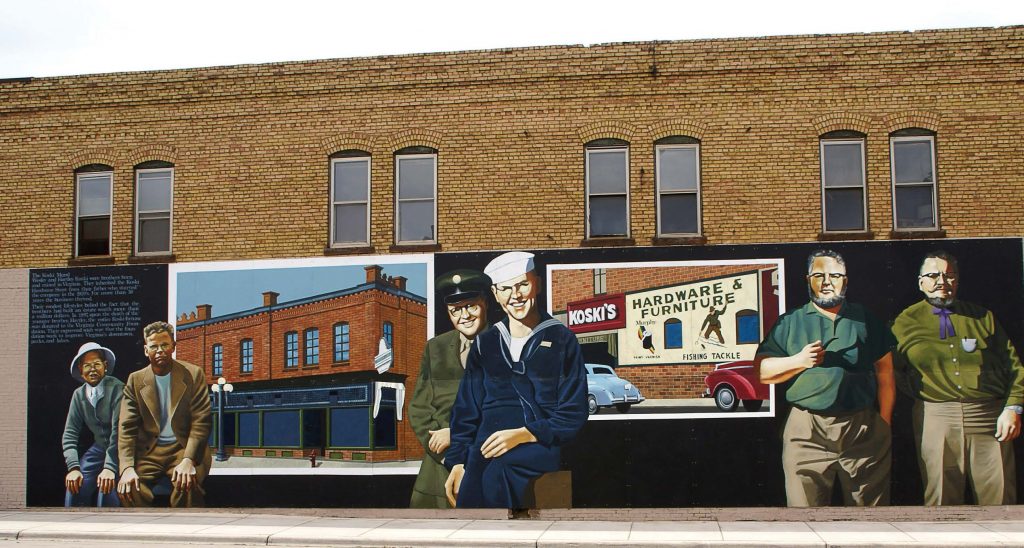 The Hartley and Wesley Koski mural honors the two brothers who bequeathed their entire estate worth $1,050,000 to the Virginia Community Foundation. (Photo provided)

They are emblazoned up to 20 feet tall on the city’s colorful and impressive murals, concentrated within a five-by-five block area downtown.

The eight murals are the creations of artists Kelly Meredith and Sue Martinsen, who have been involved in more than 40 murals throughout the Midwest.

The idea for the downtown’s artistic beautifi cation came a decade ago when Marieta Johnson, who was instrumental in establishing the Virginia Community Foundation, visited the murals in Ashland, Wis.

“The artistry in the Ashland murals was impressive, especially when I was able to see the murals in person,” she said. 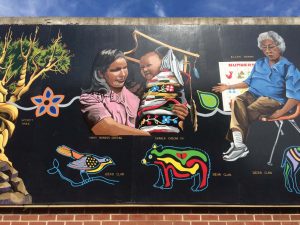 The mural depicting members of the Ojibwe tribe, the seventh mural in the series, is “rich in history and provides an opportunity to tell that story in a positive and artistic manner while representing diverse ethnic and cultural traditions through art,” said Carol Sundquist, a mural committee member. (Photo provided)

“After discussing the details of the overall project with the artists, it occurred to me that we can do this in Virginia, too.”

Johnson shared her vision with Virginia community leaders and “it was apparent the idea of putting up murals would be well supported.”

The foundation formed a mural committee and commenced planning for 12 murals in 12 years, raising funds and plotting locations on the walls of downtown buildings.

The first mural, completed in the summer of 2008, featured brothers Hartley and Wesley Koski, two longtime community stalwarts who bequeathed their $1 million estate to the foundation.

Deciding the subject of the first mural was not difficult. “What better way is there to enhance the spirit of community and the quality of life in Virginia than to honor two people who believed in the future of Virginia while simultaneously adding beauty, art and attraction to Virginia and the downtown area?” asked foundation board member Brandon Seppala.

The space rental and artist fees for the mural were paid for through grants and donations, and Minneapolis-based Valspar Corp. donated the paint.

The second mural, completed the following year, honored Martin “Marty” Biondich, a legendary affable fixture who helped keep downtown clean and invariably greeted people with a smile and kind word on the street or at the local baseball diamond.

His mural is embedded with actual baseballs purchased by locals. For $50 they could have their names written on their baseball. Donations were used to finance subsequent murals, some of which also incorporated fundraising items, such as plaques and bricks. 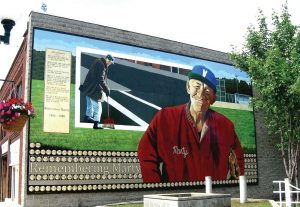 Martin Biondich, known around town simply as “Marty,” was an amiable downtown mainstay who swept the streets and greeted everyone with a smile. The baseballs embedded in the mural were purchased by residents for $50 each to help raise funds for subsequent murals. (Photo provided)

“The committee wanted something everyone could afford to purchase to be part of the community effort,” said Ronda “Rudy” Harvey, executive director of the Virginia Community Foundation.

The foundation leases the wall space, owns the murals, keeps them insured and pays for their maintenance. The first murals were painted on the building’s surface. “After the first few, it was decided the murals would be put on panels in case the locations needed to be changed,” said Harvey.

Even with the panels, creating the murals is a mammoth task. The veteran’s mural stretches just a few yards shy of the length of a football field, and the athletic mural, completed in 2015 and measuring 105 feet by 28 feet, contains 98 panels.

Upcoming murals will feature a downtown parade and a nod to the region’s logging or mining industry, according to Harvey, who said the artwork attracts 100,000 visitors annually to the city of 8,712 residents, many of them during the city’s annual Land of the Loon Festival.

Visitors have arrived from “all states in the U.S. and we have had visitors from Germany, France, Belgium, Canada and Finland,” she said, “and those are just the ones I have personally met.”

The city features the murals on its website, www.virginiamn.us. The foundation “promotes the murals and our board approves everything with the mural production and expenses,” said Harvey.

She has fielded “many calls from communities who are looking to do the same thing in their own communities. We share the artists’ information and talk about how they were created.”

Harvey’s advice to visitors is to “stop in and visit the foundation and we can give them a map of the murals.” The foundation is also discussing “creating mural tours in the summer months as well as educational tours for schools.”