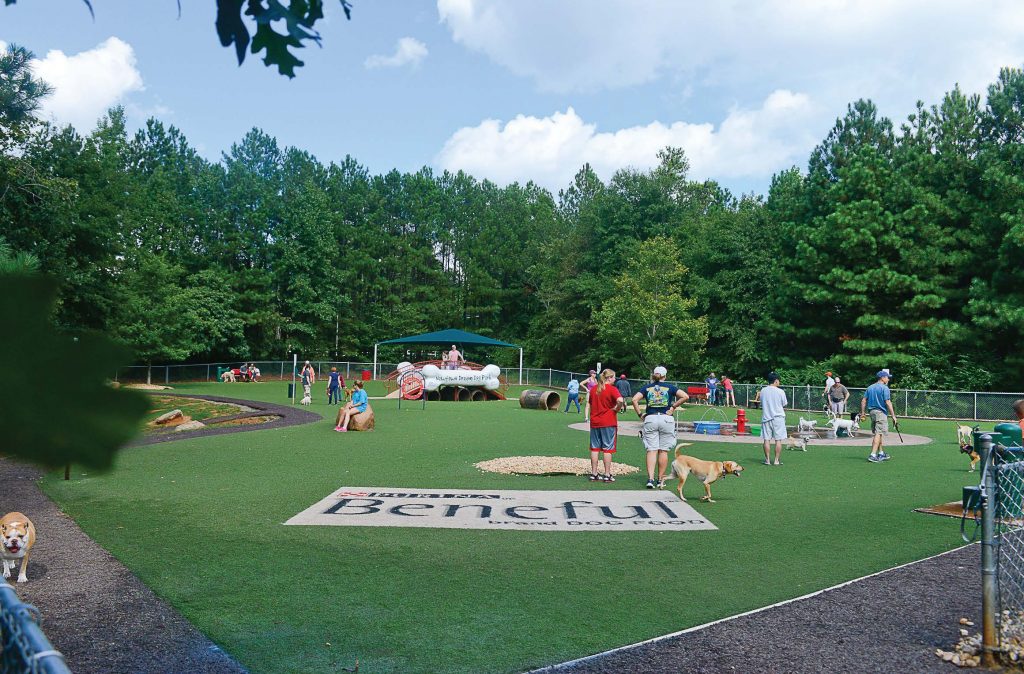 Newtown Dream Dog Park in Johns Creek, Ga., was selected by Purina Beneful as the winner of its nationwide Dream Dog Park competition, resulting in it being revitalized. (Photo provided)

One of the fun activities of working in a city’s parks and recreation department is planning, creating and maintaining a successful playground for its citizens’ furry four-legged family members.

Pet parks are growing in popularity all over the nation as humans love seeing their off –
leash dogs romp freely and socialize with other canine friends in their very own dog recreational area — and some of them even have envious amenities leading to a five “Woof” dog recreational area.

According to the American Kennel Club’s website, other advantages of a dog
park include allowing dogs to exercise and socialize safely; promoting responsible dog ownership; providing an outlet for dog owners to socialize; and boosting the community by promoting public health and safely.

Building a dog park takes tremendous planning. Start with a group of committed dog park enthusiasts; hold a public meeting; educate dog owners on the need to be responsible; choose a site; create a budget; and finally determine how to generate revenue for the budget. Create a proposal and seek the approval and input of important organizations in your community. A good way of demonstrating support is to place petition folks at groceries, pet-supply stores and other high-traffic areas.

According to Niky Roberts, director of marketing/public relations for Purina, the company sponsored what was to be the first of six Beneful Dream Dog Park renovations in 2010. The top $500,000 winner of that first year’s makeover was Johns Creek, Ga.’s, Newtown Dream Dog Park

“In 2015 and 2016 Beneful took the program in a different direction supporting dog park projects through crowdsourcing website GoFundMe, along with a handful of smaller scale makeovers to existing dog parks, versus building new ones from the ground up as we did with the original four,” said Roberts. 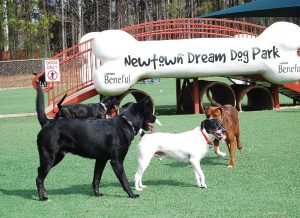 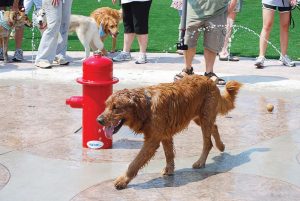 Water features can be an added bonus during summer months, cooling down canines at play. Pictured is Johns Creek’s dog park. (Photo provided)

Edie Damann, external communications manager for Johns Creek, noted that the dog park was already a popular feature in place prior to its becoming a city park.

“When the city incorporated in 2006, it took over control of the parks within its borders from Fulton County. In 2010, the Johns Creek dog park was selected by Purina Beneful as the winner of its nationwide Dream Dog Park competition,” said Damann.

“On Sept. 8, 2010, Beneful unveiled a plan designed by the Beneful WagWorld Dream Team. Designer and television host Jason Cameron and best-selling author Arden Moore crafted the park plans, which include surfacing the fenced acre-sized dog park with artificial turf, a pond, tunnels and obstacles, and drinking fountains for pets and people. The plans were approved by the city’s public works department. Resident Pat McNeely submitted the application to Beneful.”

The city, said Damann, used the $500,000 from Beneful for the revitalization and redesign of the Newtown Dream Dog Park. That amount was spent on the renovations. Maintenance of the park is included in the service contract with Precision Landscape Management, and — weather permitting — the dog park is open year-round.

What are some standouts of the Johns Creek dog park so far?

“The park contains water features, agility equipment, a bridge and places to sit for pet owners,” said Damann, “and depending on the weather, we have found the water fountains are quite popular in the summer.”

What was the biggest challenge in creating the area?

“No real challenges,” admitted Damann. “The contractor for the project was well known — he had three different television shows on the HGTV network at the time, and Beneful was paying the bills. Pat McNelly came up with a great concept, inspired by his Siberian husky, Koda.”

Other dog park features could include separate areas for small and large dogs, benches, shelter, a walking trail and dog waste bags.

Parks such as these are especially welcomed by travelers who may have to crate their dogs during long drives and thus welcome the chance to exercise their canines during pit stops. Additionally, if a pond is present, travelers can also wash their dog before resuming travel.

Those municipalities considering building a dog park should have policies in place for the safety and comfort of humans and pets. And these policies should be posted at the park, along with the hours that the park is open from. Common policies adopted by cities are that dogs must wear a collar with a valid license and have current vaccinations; handlers must pick up after their dog(s) and dispose of the bagged waste in the containers provided; dogs must at all times be under the control and supervision of their handlers; children under 12 must be accompanied by an adult; food and glass containers are not permitted for either human or canine; cats are prohibited; and puppies and female dogs in heat are not allowed in the park.

A good playground for dogs should have parking close to the site, shade, water and cleaning supplies, including covered garbage cans, waste bags and pooper-scooper stations.

“We opened because of the love of dogs and the desire to give like-minded people a safe place to let their dogs off-leash and to socialize,” said Carey. “This was the idea of one local dog owner.”

Funds were raised from local dog owners, local grants and a local veterinarian, who received naming rights for 10 years because of his $10,000 donation.

“The most popular attraction is our free park, lights for extended hours in the winter and a drinking fountain for dogs and humans in the warmer months,” said Carey. “Also, our open-sided weather shelter is popular on hot sunny days. In winter people bring their dogs, but they stay for shorter periods.”

The approximate cost for the startup was the earlier-mentioned $10,000, but Carey said once the fence was up, “you have the dog park, and soon after we added benches, which were sponsored by local businesses.”

Because a dog park was not in the city’s master plan, they did not assume any financial responsibility, “but they did give us the city-owned land in which to put the park,” said Carey.

He added, “Some challenges came with understanding all that comes with constructing and maintaining public property in the city. For example, from being a grassroots organization, we had to learn all the legal requirements — ordinances, building requirements and grant writing for capital projects — and the ongoing challenge of raising funds to keep the park open.”

As for the park’s future, Carey said, “We currently have a request turned into Meijer Corporation requesting them to assume longterm naming rights and financial responsibility.”