It’s not just the residents of Stevens Point, Wis., who appreciate their city. It goes a little further than that. Stevens Point has been ranked in the 2017 Top 10 Small College Towns by Schools.com.

So, fair warning, Stevens Point residents, others may move into your town when they see how nice it is and hear the siren song of its considerable attractions.

Some of the information considered for the Portage County city’s ninth-place ranking included (1) proximity to larger towns; (2) shops, restaurants and art galleries; (3) it is the home to both the University of Wisconsin and the Mid-State Technical College; (4) the town has beautiful scenery and is located on the Wisconsin River; (5) the young adult population; (6) the median annual rent; and (7) the city’s walkability and entertainment. Th e town’s Wine Walk in the summer, Fall Festival in autumn and Holiday Parade in winter were given credit as well.

Who better to tout the city’s praises than its own mayor, Mike Wiza, a University of Wisconsin communications major and a walking advertisement for Stevens Point?

“I think it is our diversity that makes us great,” said Wiza, whose wife is also a UW grad and his daughter is currently a student there.

“We have the UW here, local businesses that take pride in their community and a fabulous park system with trails (and) disc golf courses. Our K.A.S.H. (Kids Are Special Here) Playground (with 501c3 legal status) is a universally accessible recreation area with a soft rubber surface, which includes slides, swings, sand play, climbing areas and more for all ages and abilities.”

The town’s public markets, including its newest winter market, are big hits as are the Point Brewery, Sunset Park Winery and the O’so Brewing Company.

“The Point Brewery was built a year before we were a city,” said Wiza. “It’s said, ‘If you brew it, they will come,’ and Stevens Point Brewery will have its 160th anniversary this year (2018).”

Stevens Point, for trivia fans, was named after George Stevens who operated a grocery and supply business on the Wisconsin River during the extensive logging of interior Wisconsin circa 1850-1929. The river was used by logging companies to float logs to market.

According to Deaken Boggs, a senior at UW majoring in natural resources with a minor in soil and sustainable energies, what he likes best about Stevens Point is that it has a wealth of progressive and environmentally focused events to keep the city moving forward.

“I also enjoy the biking activities and the college hockey games and especially the hockey-centric nature of the community,” said Boggs.

David Colthurst, a UW grad and Wausau resident, works in Stevens Point each day and favors the city’s popular Riverfront Rendezvous, which is a grand three-day Fourth of July celebration.

“I always spend one full day here during that time,” said Colthurst. “Also, the annual trivia contest always brings me back here as well as old friends from my college days.”

A sister city to Gulcz, Poland, and Rostov Veliky, Russia, Stevens Point is also a partner city to Esteli, Nicaragua.

Arts and culture abound in the Performing Arts Center; Scarabocchio; Q Gallery; Sculpture Park; Noel Fine Arts Center; and CREATE Portage County. Then during the summer, the community is treated to family movies in the park.

How many cities under 30,000 people have their very own orchestra? Stevens Point not only has the Central Wisconsin Symphony Orchestra, but a city band and other live music events like the Levitt AMP series and all those events hosted by local businesses’ venues.

The town has plenty of winter attractions to draw college students as well as other visitors.

“We have four to five outdoor ice skating rinks in our parks each year, cross-country trails, snowshoeing, snowmobiling and ice fishing,” said Wiza. “We’re close to Standing Rocks ski hill and Rib Mountain for downhill skiing. And our very own Snow Art Zone is done by my friend Jef Schobert, who has new creations almost weekly.”

Schobert, a disabled veteran and formerly an Army computer programmer, has been carving snow shapes since the late ’70s and has a Facebook page, www.facebook.com/snowartclark/, where he shares photos of his work.

“I’ve been doing this for at least 35 years,” said Schobert, “and I find that when other people watch me, it makes them happy and motivates me to make even more sculptures. I have a contract with a guy who delivers snow to my yard from the sky, and I do the best I can with what I’ve got.

“I use food coloring and spray the color on the sculpture, but I don’t like to use (too much of ) the color on my sculptures though because it puts too much water into the snow, which makes it harder to recycle for the next sculpture. There seems to be a zen quality to snow carving, challenging and changing at every turn. I find it fun.” 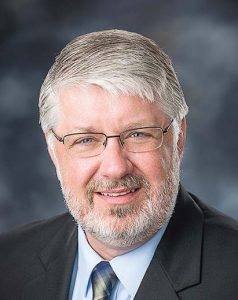 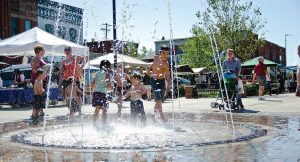 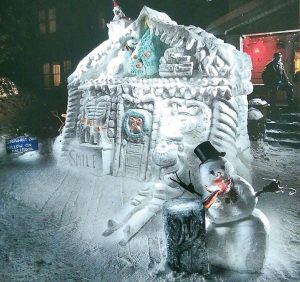 Pictured is the “Smile” sculpture by Jef Schobert. (Photo provided) 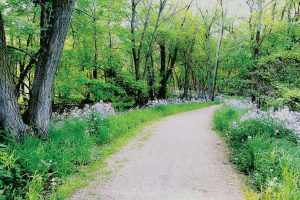 Green Circle Trail is one of many recreational opportunities available to residents and visitors of Stevens Point. (Photo provided by Nena Fisher)

Schobert uses a mason trowel, a screwdriver and a machete; he also wears leather army surplus mittens, which get wet and help smooth the surface.

Wondering how much Schobert charges for a snow figure? For a single carving, he will charge $500, which is “pretty pricey for most people, but I also do volunteer work if someone wants to raise money for a good cause.”

“The reason for such a high price is because it hurts to do what I do,” said Schobert. “I hurt daily, hourly from two accidents on active duty — back, neck, ribs, shoulder, hip, thigh, knees — and throw in a few concussions and a broken thumb. My snow carving is a necessary therapy.”

Schobert estimates that he has completed 3,000 or so snow art sculptures, or an average of 250 annually.

He added, “As a bonus, the winds sheer around this town, due to the Wisconsin River on one side and little Plover River on the other side. This feature was looked at as a safer place to live in the event of a nuclear war in the late 1960s.”

“There are people, right now, working on an indoor sports complex, talking about enhancements to our current sporting venues, adding to the thriving parks system and creating a Cultural Commons asset to showcase our rich heritage and ties to our sister and partner cities,” said Wiza.

“Many of the great things you see in Stevens Point wouldn’t happen without passionate and determined volunteers. We owe a lot to the countless people who work on these projects.”