2017 saw a increase in government spending, with a peak increase at 5.4 percent in the second quarter when compared with the second quarter of 2016. In “Onvia State & Local Procurement Snapshot — Q3 2017” Onvia Lead Market Analyst Paul Irby noted, “After two of the fastest growing quarters in our series, the state, local and education (SLED) market in the third quarter cooled somewhat to a still historically strong 3.1 percent year-over-year rate of increase. While the recent hurricanes had an impact, the market was also fitting into the typical cyclical ‘up’ pattern where once the first two fast-growth quarters are over the trend begins to normalize.” 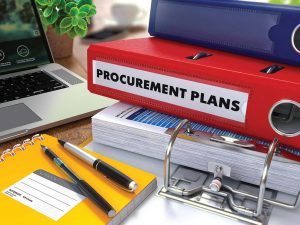 By funding and supporting procurement staff, municipalities can save thousands of dollars in addition to bringing them into the purchasing process early on. (Shutterstock.com)

As far as annual growth by agency type, education led the pack with an 8.2 percent increase from 2016 while local agencies saw an increase of up to 4.1 percent. State agencies were down -.7 percent from last year’s third quarter.

Onvia delved deeper into the findings to pinpoint industries that are particularly seeing growth when it comes to purchasing or budgeting priorities in all level of government. Among these rankings, the company found environmental services; health care; construction; educational products and services; and professional business services topped the list for local governments. Other priorities included water and energy; architecture and engineering; public safety; technology and telecommunications; transportation; financial services and insurance; and operations and maintenance.

However, with these strong rates, local government procurement professionals are feeling the pinch, with another Onvia report — “Survey of Government Procurement Professionals 2017” — sharing nearly 40 percent of its 668 respondents were already overworked. Forty-two percent of those respondents worked in city government. This increase in workload has not only decreased efficiency, but also reduced response agility, customer service and, in some cases, the number of bids, with four out of 10 agencies failing to attract enough bids.

To address these challenges, Onvia recommended addressing the workload while also working on engagement and cooperation between procurement staff, users and stakeholders. Of course, it also noted government agencies should look at efficient buying methods from co-ops to piggy-back contracts and pursuing automation, or e-Procurement.

Many cities have already begun to do just that.

Two factors driving the spread of cooperative purchasing are both consumerism and the digital age, the latter of which has put information at the fingertips of purchasing professionals 24/7. “Another trend,” Schwartz said, “is the development of more cooperative services.” This, he added, has allowed cities to really compare co-ops side by side.

As cooperative purchasing grows, Schwartz noted, “Another trend is the advancement of standardized best practices.”

The National Cooperative Procurement Partners is one organization that has been cementing those best practices while helping cities and other organizations start cooperative purchasing. Its Executive Director Tammy Rimes compared a good co-op with a Costco or Sam’s Club, only for governmental agencies. She said, “They lower prices and vendors don’t have to look at every proposal.”

As cooperative purchasing continues to flourish, more standardized best practices will be advanced, and the National Cooperative Procurement Partners is one of those organizations doing so. It has created a map to help formulate a strategic cooperative procurement plan. (Photo provided by NCPP)

With the growing number of co-ops available, Rimes said procurement folks need to find their best fits for specific items — such as one co-op being good for fire/public safety while another might specialize in office supplies — while also having a backup plan in place.

“There are ways to be strategic,” she said, adding procurement professionals need to work with end user departments and plan ahead for known expenses that will be coming up, like tires. “Go ahead and get them off your list.”

She noted NCPP teaches purchasing departments or professionals not only how to use co-ops, but also how to implement strategic planning to make the most of them. Rimes is no stranger to the process as she was a procurement professional for the city of San Diego after having already worked 24 years in other city departments. “Procurement was my hardest and best job,” she said.

As for other best practice, she emphasized, “First in strategic planning is you need to bring purchasing folks to the table upfront, not halfway down the road. If purchasing is there at the beginning they could have done research, could have meet with vendors before beginning the active bid process when that door closes.”

When council members or department heads bring purchasing professionals in early on in the project, it can mean saving thousands of dollars, particularly when a city manager or council gives them leeway to be creative in finding solutions. Similarly, Rimes recommends cities give their purchasing professionals funding and support so they can find these resources for the city, rather than treating procurement departments like the red-headed step child.

“By reinvesting in procurement, you will see so much in return,” Rimes said. When in doubt, Schwartz said, “I’d encourage them to engage with NCPP. I’d also encourage them to reach out to municipalities within their region.” He added, “If they don’t have a strategic sourcing plan, it is something to dig in to.” 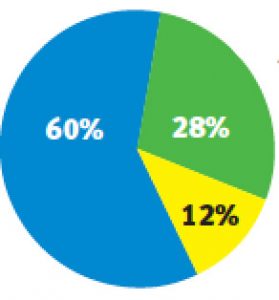 Of its survey respondents, Arizona State University found 28 percent had a green purchasing policy while 12 percent didn’t know if one existed and 60 percent did not have one in place. (Data provided)

Another interesting purchasing trend to keep an eye on is the growing awareness of green procurement. Arizona State University released “Advancing Green Purchasing in Local Governments” in June, which highlighted the results from its survey that generated 616 individual responses from 459 cities of 25,000 residents or more. The goals of the survey include determining the facilitators and the barriers to the adoption and implementation of green purchasing policies in local governments; recommending actions for advancing green purchasing practices; and encouraging local governments that lack green purchasing policies to implement them within their jurisdictions.

Of the respondents, “28 percent of their cities had a green purchasing police; 60 percent reported they have no policy; and 12 percent did not know if their city has such a policy,” according to the report.

Nicole Darnall, professor of management and public policy at ASU and the associate director of the Center for Organization Research and Design, said, “We look at it almost as a glass half full, half empty situation. We didn’t know what to expect (at the beginning of the survey).”

While the figure might still be small, she noted green purchasing is on cities’ radars. She added, “It creates an opportunity for these cities to save money, improve community well-being and address cultural needs that they couldn’t previously.”

Of the 170 department directors who responded to the survey, 28 percent reported their cities had adopted green purchasing practices, with 58 percent indicating their cities successfully implement the policy. The report added, “By contrast, 42 percent (65 total) of the department directors considered the implementation of their green purchasing policies to be either ‘neutral’ (neither successful nor unsuccessful) or ‘unsuccessful.’”

Those who did succeed, according to Darnall, had access to information, entrepreneurial spirit and collaboration. “Leadership was huge,” she added. “It can’t be from the bottom up.”

As part of this leadership, there needs to be training development across a city’s many departments, and along with training, employees need to be incentivized, with individuals being recognized for their efforts in green purchasing. This, Darnall said, encourages change from the traditional policies.

Additionally, cities should network with other cities and with leaders who have figured out how to integrate green purchasing into their organizations. “And internally, departments need to work better together,” she added, noting this can be a challenge if purchasing professionals are siloed into their own departments.

Darnall said they have only opened the window to glimpse at municipal green purchasing practices with the report and hopes it can serve as justification for others to look at the issues.

“There can be a perception that (green purchasing) will cost more money than a city can benefit from it,” Darnall said, adding there are savings to be had. “Private businesses are leading the charge. If they are seeing benefits, their experiences are worth listening to.”