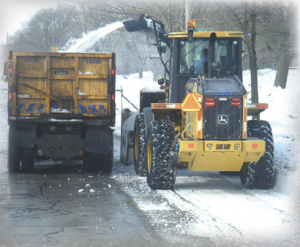 The ability to clean up after a snowstorm requires yearlong preparation to ensure every piece of equipment is in tip-top shape, from major repairs and preventative maintenance to securing media contacts and setting up weather contacts. (Photo provided) 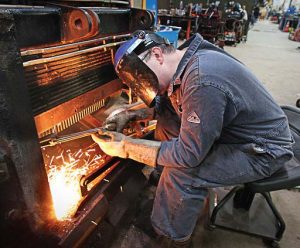 A fleet service employee of the city of Milwaukee completes repair work. The city completes its major repairs and preventative maintenance in the summer months. (Photo provided) 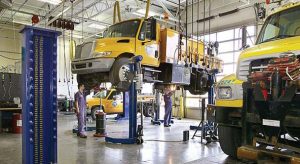 Milwaukee installs the same equipment on almost all its trucks to make it easier for its technicians to make repairs. (Photo provided) 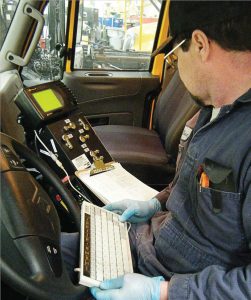 An important part of winter preparedness is to inventory what equipment is currently in hand and its status. A Milwaukee Fleet Services employee runs a diagnosis on a truck. (Photo provided)

With winter around the corner, it’s time for drivers to prepare for icy roads and snowy conditions. This includes ordering snow tires, dusting off that old window scraper and finding a warm hat.

Some may think that October is too early to worry about the winter. That is until they realize many snowfighting maintenance crews have already been preparing for months — almost as soon as the previous winter ended.

“We actually start our snowfighting maintenance in April,” Jeffrey Tews, fleet service manager for the city of Milwaukee, Wis., said. “It may seem a little early but that’s when you want to spend the most time figuring out what you’re going to have to get done before the next time snow falls.”

The department starts by taking an inventory of the equipment it still has so officials can purchase what it doesn’t. This includes warning lights, backup alarms, hydraulic equipment and whatever else it might need. Just as long as each specific type of equipment is the same.

“We have the same equipment installed on virtually every truck,” Tews said. “It makes it a lot easier for our guys to repair things.” Next, it’s time to get equipment ready for storage.

“Prepping it for storage in essential,” he said. “You’re flushing out the liquid, you’re reapplying rust proofing and you’re repairing any known defects.”

But it doesn’t stop there. Workers also seal up all hydraulic and electric connections and grease up equipment so that it’s fresh and ready to be used the following fall. Chlorides are washed off all equipment.

In the summer, the crew will then begin to work on major repairs that they didn’t have time for in the winter as well as preventative maintenance.

“We’re also looking at solutions to any problems that we might have discovered over the course of the past winter,” Tews said. “(Like finding solutions) to unusual rust problems like some of our Freightliner trucks had, where we wound up finding rusted coolant lines that we couldn’t get to.”

By the end of the summer, a snowfighting maintenance crew should make sure that it has enough major parts.

“In August we’re going to start looking at our parts contracts,” he said. “We make sure we have enough cutting edges, plow shoes, wiper blades, batteries and (that) all of our contracts are refreshed or renewed. If we need to go out and get new contracts, we figure that this is the time to do it.”

At this time, it’s also a good idea to reach out to other local municipalities that way if the snowfighting crew runs out of parts, it can borrow some. Then in the fall start mounting equipment and make sure everyone on the team is trained and up to speed on procedures so that when winter finally hits, everybody is ready to go.

It’s also important to establish media contacts with television and radio stations. These contacts allow fleet managers to quickly notify the public in case of a snow emergency. Another effective way to reach the public is to have notifications pushed out to the community on social media outlets.

Weather service contacts are also crucial to have. “Some services are providing us daily updates and they also give us forecast when they know that trouble is coming,” he said. “We get a special alert.”

Not only is Tews told what weather is coming, but he is also informed on what the temperature will be at the start of a snowstorm and during it, when the snowstorm should end and other pertinent information.

“Dew points are extremely important to us because we need to use them to determine how much salt to put out on a per lane and mile basis,” he said.

If a snowfighting crew uses too much salt, it could create problems.

“We’re always trying to weigh the best possible ways to treat a storm (by) using just enough (salt) and never using too much,” Tews said. “The last thing we want to do is see the streets white with salt after the snow is long gone — that means we over treated. We’re environmentally conscious as well, so we are stewards of the environment and our resources.”

But there’s alway unpredictability when it comes to the weather, so it’s best to prepare for the worst and hope for the best. “We have contingency plans for the worst-case scenario,” Tews said. “You have to plan that way and execute your plan based on what’s happening.”

For instance, if weather services have told Tews to expect 4 inches of snow to fall, not only does he prepare for 4 inches, but he will also prepare for 8 inches. In some cases, Milwaukee will even call upon private vendors that they have on retainer to provide extra equipment. Another important aspect of effective snowfighting is to use the best plow features. For example, Milwaukee will only purchase plows that are coated with two-part epoxy paint. That way, snow will roll in front of them.

“You don’t want to be pushing it,” Tews said. “You want it to roll right off of your plow because it moves quicker and (that way) you’re not wasting as much fuel.”

Everything that Tews and his crew uses has a story behind it, and over the years, they have figured out what works best for them, but they aren’t done trying to improve.

“The best thing that you can do is talk to your people — the guys who are doing the work — and get their best ideas and suggestions,” he said.

At the end of the day, it’s up to each snowfighting crew to figure out what equipment and procedures will help it be successful.

“Things that work for us may or may not work for others,” Tews said. “It’s really up to you to figure out where that sweet spot is — what’s best for your operation.”