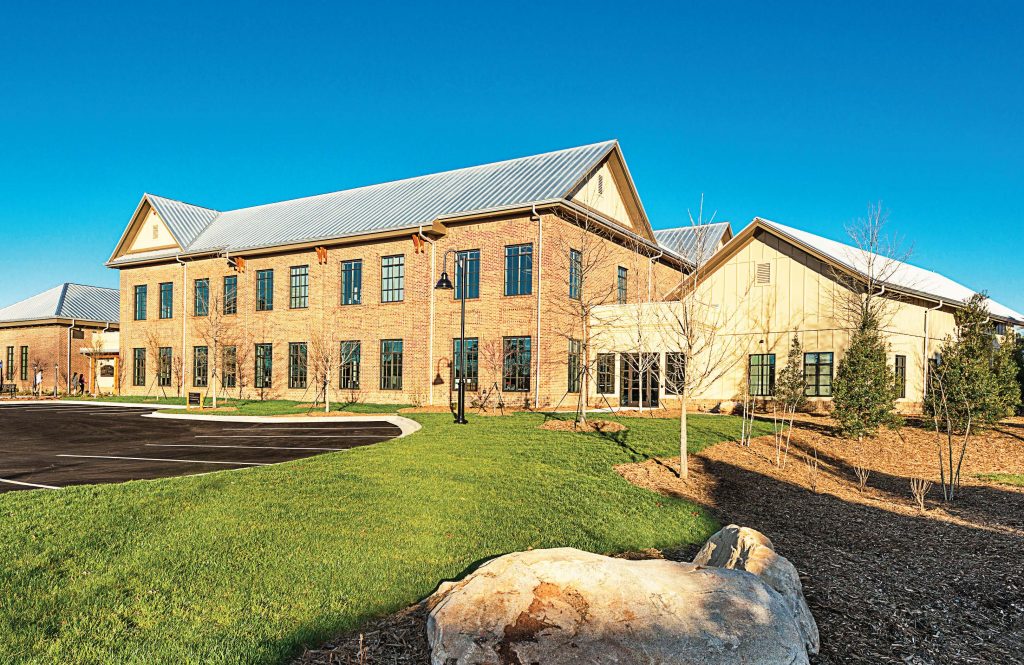 Celebrating its grand opening March 13, Milton, Ga.’s, city hall captures the city’s essence and blends into its surroundings as if it has been there far longer. It has quickly become the downtown’s anchor. (Photo provided)

City council meetings can be even more interactive with the new chamber’s screens. (Photo provided) 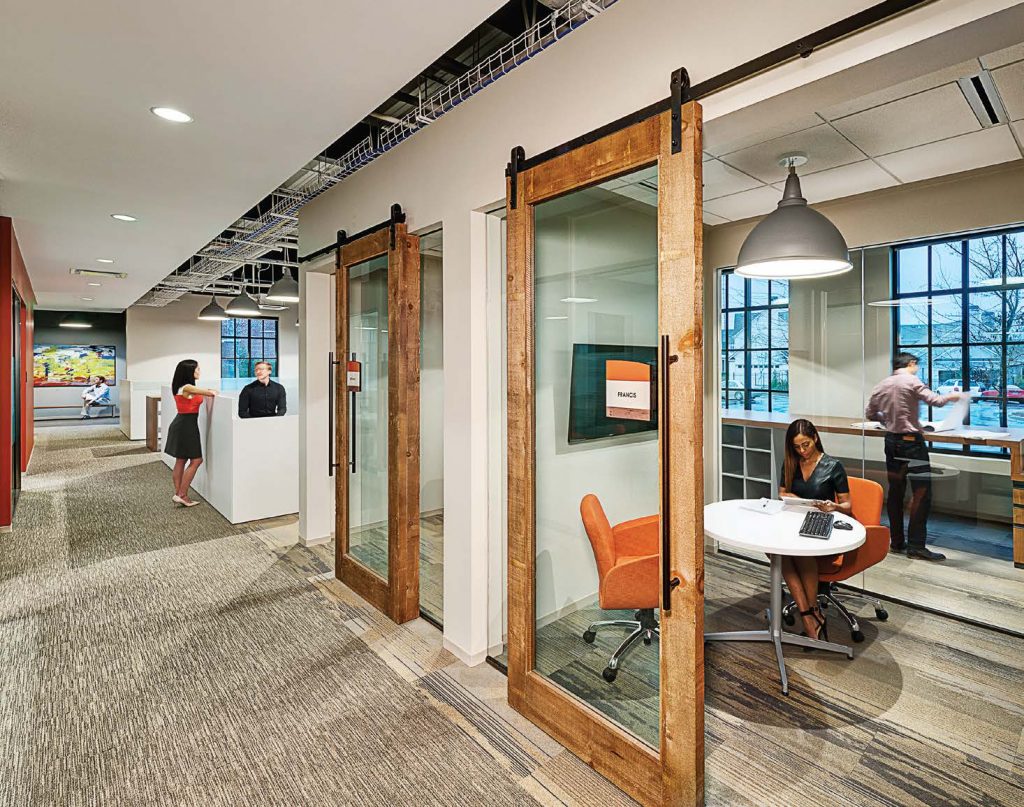 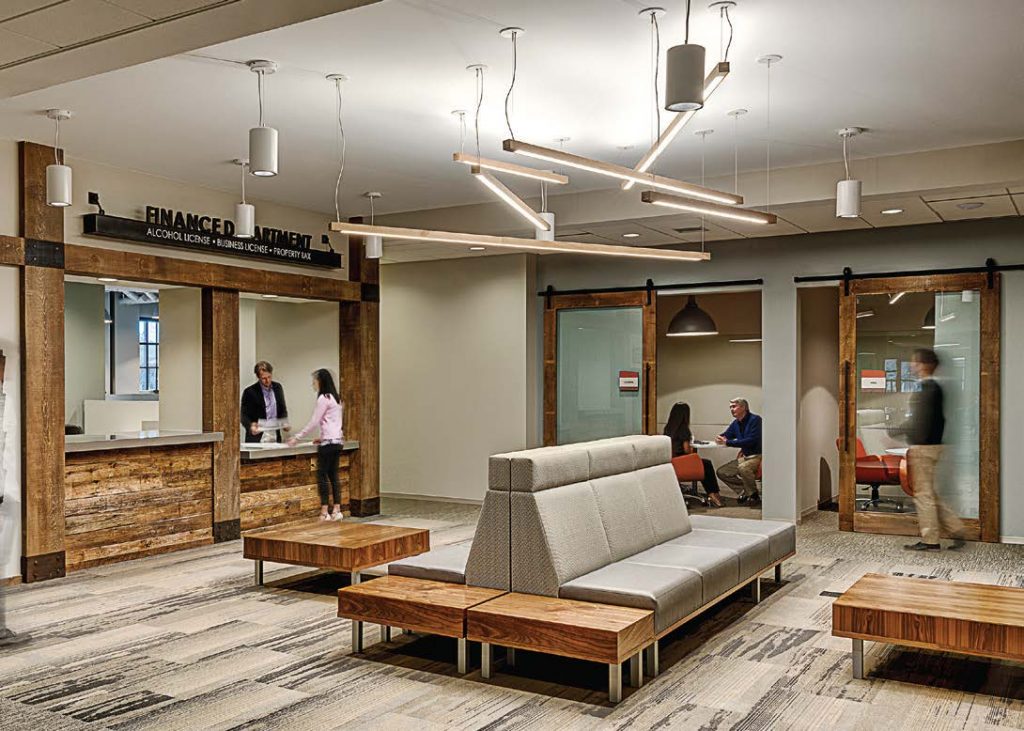 Another key component of the Milton City Hall design was to make it welcoming to the public while also giving them a clear view of the city’s inner workings. (Photo provided)

Milton, Ga., might be relatively new on the municipal scene, having only been incorporated since Dec. 1, 2006, but its city hall gives the appearance of having existed for a while — despite just celebrating its grand opening March 13. Featuring red brick and stable-like features, the new city hall captures Milton’s character and past while its interior reveals it as a city of innovation.

Kathleen Field, Milton community development director, noted it was time for a larger space as the city approached its 10th anniversary and a site within the historic downtown Crabapple district was chosen.

“We felt city hall should anchor the downtown,” she said; however, the property didn’t come without its challenges. “It was a retention pond that had to be filled. It added to the expense of the project, but the space was important.”

This decision to take on land that was otherwise undesirable also served as a statement, according to Brian Parker, AIA, LEED AP, associate principal with Cooper Carry, the architecture firm designing the complex. With its selection, he noted, “The city said we will take on this property, lay the infrastructure, get it back onto grade and leave more easily developed land for others — to spur development around them.”

In its short existence, Field said city hall has already become that anchor they envisioned when the project first began, and while community members waited to see what the complex would look like, they have since embraced it. Because of its location, Cooper Carry made sure the complex — which is approximately 32,000 square feet and includes a community center — would fi t in with the rest of the historic neighborhood.

The city hall’s two wings — administrative and legislative — and community center building further emphasize Milton’s culture through the use of barn wood, a fitting touch with Milton’s horse farms and its logo of a galloping horse.

As an added touch, Field said, “All the signs to the offices have a barn wood trim on them.”

While matching its surroundings, city hall’s administrative wing could be described only as Google-esque — and it is having quite the impact on employees day-to-day.

“Previously (Milton) had one meeting room with less than modern technology,” Parker said, noting the importance of integrating new technologies into the new city hall while leaving the city room to grow as even newer technologies become available. “They are ready to layer (when the time comes).”

The city hall now has all the latest gadgets. According to Milton’s city architect Robert Buscemi, the city now has an innovation area on the second floor complete with all manner of technology and writable glass surfaces. “If we are attracting new businesses,” Buscemi said, “we now have a space to show our innovativeness.”

He noted a goal has been to showcase Milton as an innovation hub, and the space can evolve over time. “It might take on purposes that we couldn’t predict today.”

Since moving into the new city hall, Field said, “We are always pulling up accessor documents now on the screen. We no longer have to print them.”

She added the new conference phones will be another asset to the city as will the screens in the new city council chamber, which provide an opportunity to make city meetings truly interactive while also getting information out to the public. Another bonus for staff is each office area has its own thermostat.

To add to the collaborative atmosphere, the administrative wing is open and extremely light with numerous windows welcoming in natural light. Parker said, “Another unselfish move the city did was it flipped management to the inner core to open up the windows so they are not blocked by perimeter officers.” Management offices then have glass front doors to still benefit from the exterior windows. “It was a decision made very early on so staff would have the most opportunity to benefit (from the natural light).”

While some might think sound would be an issue with an open layout, this potential problem was remedied using white noise systems, which add a neutral amount of noise to the space.

Another achievement with the building project, according to Buscemi, is everything is energy efficient from the air conditioning and insulation to the lighting, which is all LED. Other green building practices were also used, with the painting being completed with low-VOC paint. He said, “We wanted to create a healthy space so people with allergies would have no reaction to anything.”

Because of these choices during the process, Buscemi said, “The cost of ownership will be low.”

As for the end result, Field said, “The staff love it. People are just happy and collaborating. It is working as we hoped it would.” She added city employees feel such ownership of the space if they see a spot on the floor they will clean it.

Bringing the community in

“The community center has been very well received,” Field said. “The community has rented and leased it out a lot, not only for city meetings. It’s been a really popular space.” She added for the city it was important to bring in the community because as she puts it, “It’s their building as well.”

Within city hall, there are also kiosks available right when one walks into the building. Of the kiosks Buscemi said, “They celebrate what Milton is about.” He added the kiosks relay community service information from the police and fire departments, the city’s Facebook page and community events. “Some of them have photos and we can trade them out. Some are just interactive. We wanted to showcase what the city was about.”

Other choices in the design and building phase also were intended to create a welcoming environment — including those many windows. “(Buscemi) and (Field) would tell us this building is for the people,” Parker said. “They wanted it to be very open so people could see the business of the city taking place.”

Everything feeds into each other, with Field adding, “It really allows us to bring the community in.”