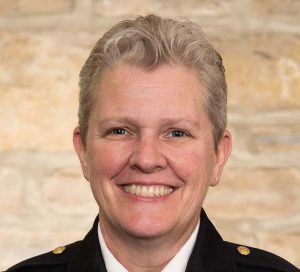 Chief Tracy Hahn of the city of Upper Arlington, Ohio 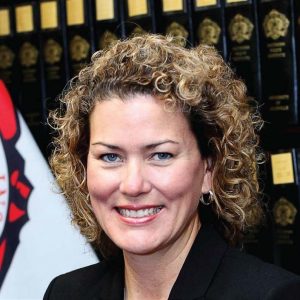 Lt. Lara Fening with the city of Oxford, Ohio

Women in law enforcement bring a different set of experiences and perspective to the job that can prove to be a boon to their departments and communities.

Chief Tracy Hahn of the city of Upper Arlington, Ohio, and Lt. Lara Fening with the city of Oxford, Ohio, are two examples. Hahn studied criminal justice at Ohio State University and sought employment in the field following graduation. She was “turned on” to the field in her coursework, particularly by the ability to help people. She was hired as an OSU campus police officer and spent the first three years of her career there before making the move to Upper Arlington. Upper Arlington is a suburb of Columbus and a primarily residential community with about 34,000 residents.

Lt. Lara Fening interacts with some young members of the Oxford, Ohio, community. Fening, along with Hahn, agree that women are a valuable asset to their departments and are often viewed as more approachable by community members. (Photo provided)

Hahn stops to provide her support to a young entrepreneur. (Photo provided)

Fening also attended the challenging administrative officer course at the Southern Police Institute in Louisville, Ky. Her department currently has 26 full-time sworn officers and she serves as the patrol commander.

In her 27 years as an officer, Hahn comes back to one overarching truth. “Women bring a different perspective in how to deal with people,” she said. The challenge, she noted, is that people tend to want to test their physical abilities more since women tend to be weaker than their male colleagues.

“Everyone gets tested, but it seems like women get tested more,” she said. “You’re going to have to prove you’re going to do the job.”

That means women in the force must learn what that means for them and how to behave. She considers herself fortunate to have won the respect of her male peers, subordinates, etc.

“From the beginning, I’ve been able to prove myself competent and physically and mentally skilled,” Hahn said about her own experience.

Fening echoed Hahn’s comments, stressing the importance of confidence in one’s self in order to be effective.

“My experience with co-workers has been overwhelmingly positive, although my insecurities have run rampant when I feared they thought I was inadequate,” she said. “They have never said anything to make me believe that, so I must admit that some of that may be in my own head. When I think of the source of my perceived inadequacies over the years, it has likely been me.”

Fening added that as a woman, it’s OK to admit lesser strength, bulk and mass, but that shouldn’t deter women from trying. In her words, “We likely won’t be as strong as them, and I believe we should work on other beneficial skills we do possess instead of harping on the ones we don’t.”

That physical fitness factor is to not to be understated, however. Hahn said she’s been through a few training academies, which is an equalizer.

“You train with your male co-workers and you’re doing it with whomever starts next to you in the room,” Hahn said. “It teaches you to how to survive in difficult situations.”

Physical prowess is certainly important, but it is not the only variable to consider when it comes to succeeding on the job. Another key factor is emotional intelligence, according to Hahn.

“Women seem to be better at dealing with victims of crime,” Hahn said. “They are sympathetic and empathetic and can make people feel more comfortable. (That’s why) women victims often seek out female officers. A lot of it comes down to communication skills.”

Hahn also stressed the importance of internal motivation and confidence for women looking to succeed in law enforcement. “Be true to yourself,” she said. “Don’t be what you think people want you to be.”

Fening offers another perspective. She said women officers provide a balance to men and are a valuable asset to those in need of help. No one is 100 percent masculine or feminine in personality traits and that’s the beauty of having a dynamic team. “Most of us are a mix of bold, strong personalities blended with humor and maternal tendencies,” she said.