The city of Gatlinburg is “mountain tough” and is fighting its way back from a massive fire that started at the top of a trail in the Great Smoky Mountains National Park and literally blew into the city limits and residential areas. 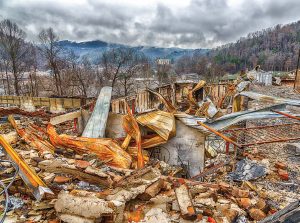 A motel complex lies in ruins after a major forest fire roared through Gatlinburg, Tenn., and a large section of the Smoky Mountains in late December 2016. (Carolyn Franks/Shutterstock.com)

Two teenagers have been charged with allegedly starting the fire at the top of the Chimney Tops Trail on Nov. 23, 2016. The fires claimed 14 lives. Nearly 2,400 structures were affected by the widespread fires, which totally destroyed 1,765 of them before it was done.

According to the Knoxville News Sentinel and other sources, the blaze was an acre and a half when it was discovered on Nov. 23. Because of the treacherous terrain near the top of Chimney Tops 2, National Park Fire Management Officer Greg Salansky decided it was too dangerous for the firefighters to directly attack the slow-burning fire and instead designed a 410 acre containment area. By Nov. 26 the fire had spread to between 6 and 8 acres, but then started jumping ridges — some a half mile to a mile away. By the time the first aerial attacks were attempted on Nov. 27, the fire had spread to 35 acres.

But on Nov. 28 winds reaching 90 mph picked up burning embers and carried them miles away to Gatlinburg — a distance of 5.5 miles — and when the embers landed, they started fires. In less than an hour, 20 structures in an area of town caught fire and that was just the beginning.

“This perfect storm, created by an existing fire in the Great Smoky Mountain National Park, extreme drought conditions, hurricane-force winds, falling trees and power lines and blowing embers, resulted in a challenging foe that required numerous resources and tons of resiliency to battle,” he said.

The city’s main street, Parkway, where all the tourist attractions and shops are, mainly suffered smoke damage. The city of Gatlinburg, home to approximately 4,100 people, attracts more than 11 million tourists each year, many of whom visit during the holiday season. But many businesses didn’t escape without fire damage and some, like the Riverhouse Motor Lodge and others, were completely destroyed. Churches, chapels and schools — like the Arrowmont School of the Arts — had some structure loss in this mega-blaze.

Fires were burning on both sides of Highway 441 between Gatlinburg and Pigeon Forge on Nov. 28, making driving difficult through the thick smoke — creating an apocalyptic scene. A total of 17,140 acres burned in the Chimney Tops 2 fire, 10,964 acres of which were in the Great Smoky Mountain National Park. The Cobbly Nob Fire burned 764 acres—a national park spokesperson said that fire was started by sparks from downed power lines in the high winds.

Not only did these firefighters have multiple blazes to deal with, in the early hours of fighting the fire, The Tennessean reported hydrants were intermittently running dry — reportedly because of the power outages created by the high winds causing pumps to quit and, in some cases, because flames had reached pumping stations.

A press release from the Tennessee Emergency Management Director Patrick Sheehan released on Jan. 25, stated, “The Sevier County wildfire is the most catastrophic wildland-urban interface fire event in the history of Tennessee and the most devastating fire in the state since the 1916 East Nashville fire.”

Damages were estimated to be between $5 and $8 million — but the final cost has not yet been released.

A park official said on their end during the peak suppression activity they utilized 780 firefighters from 40 states and D.C., 61 engines, seven helicopters and five bulldozers. 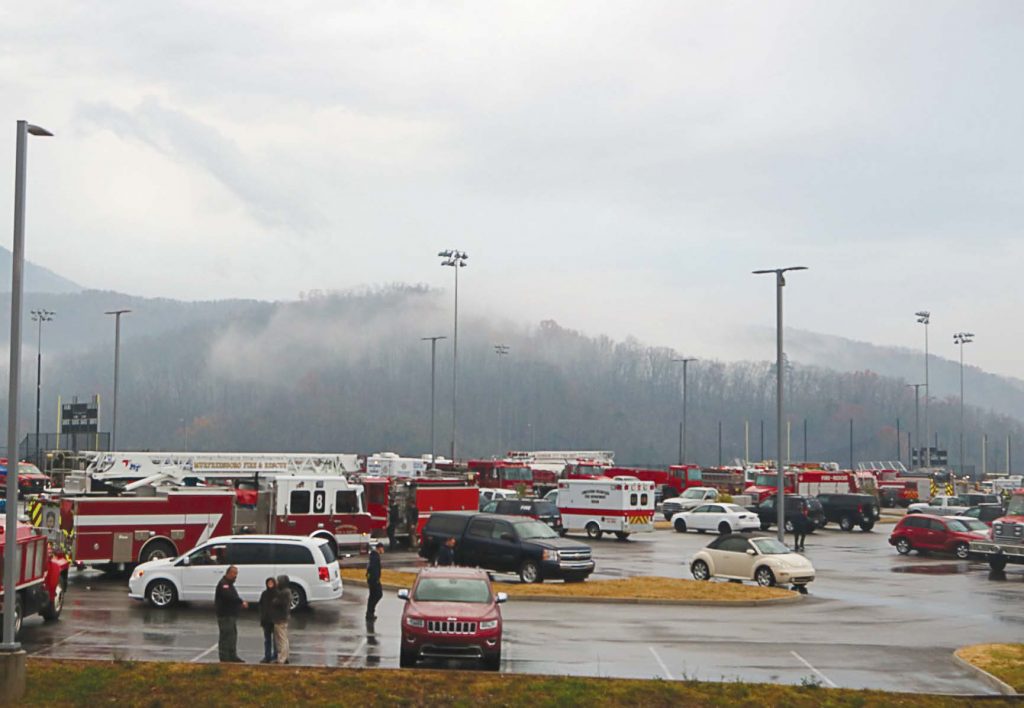 A staging area was set up for first responders and emergency personnel who were battling what is being called the worst fire of the century. Winds reaching up to 90 mph caused embers from a forest fire in the Great Smoky Mountains National Park to jump ridges and travel miles, starting fires all along the way (Photo provided)

Because of the widespread area of these fires, after the major fires were doused, firefighters continued to battle blazes.

He said 11 fire departments from Sevier County, plus an additional 154 from throughout Tennessee, helped battle the blaze, bringing more than 270 apparatuses and over 1,200 responders.

“These responders worked around the clock for eight days until all resources were finally demobilized on Dec. 5,” he said. “Amazingly, despite the extreme hazards faced, only two minor injuries were reported (among the firefighters), neither of which required hospitalization.”

Despite the devastation, the citizens of the area have been picking up the pieces. Fire Chief Miller said, “Th e town and citizens are in the recovery process. Th e rebuilding phase has begun for many property owners and the tourists are returning to our mountain community.”

Miller added, “We’ve established the ‘Mountain Tough Recovery Team,’ which is responsible for assisting the victims of the wildfires to secure housing and other necessities.”

As for how his department is recovering, Miller replied, “The fire department personnel have not missed a beat. They have continued to display the utmost resolve and dedication to their beloved community.

“The response to this fire was epic — the largest assembly of first responders in the history of Tennessee. Firefighters from Gatlinburg, Sevier County and throughout Tennessee as well as law enforcement personnel and military men and women worked tirelessly through dangerous conditions to combat this unprecedented fire storm,” Miller said. 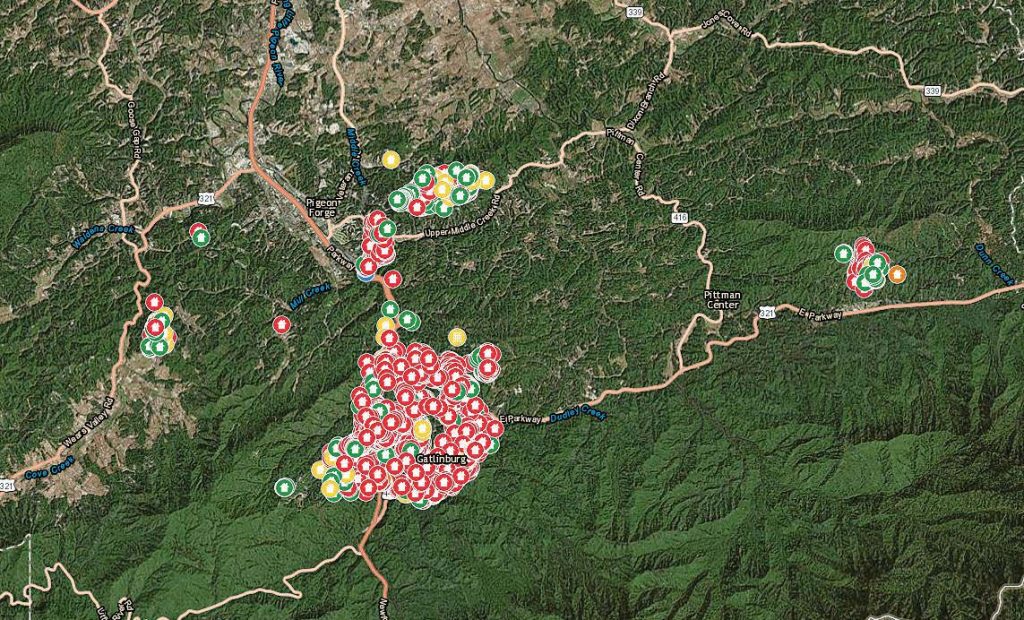 Nearly 2,400 structures were affected by the widespread fires, which totally destroyed 1,765 of them before it was done. This GIS map highlights a portion of the damage, with the red markers signifying structures that had been “destroyed.” Orange markers represent structures with “major” damage while yellow means “minor” damage and green “affected.” (Photo provided by Gatlinburg, Tenn.) 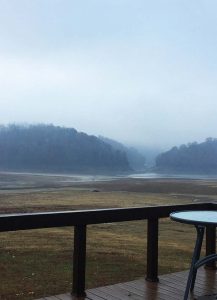 Smoke from the Gatlinburg/Siever County fires could be seen from the Dave and Leigh Kirk home 15-20 miles away. (Photo provided by Leigh Kirk)

Officials from all agencies are still sorting through the details of the fire and the response to determine what can be learned from the tragedy.

TEMA Director Patrick Sheehan stated in that Jan. 25 press release, “A major disaster such as this can take months to complete.

“Additionally, any release of an after-action review will be subject to the requirement currently in place from the Sevier County DistrictAttorney to hold records subject to Rule 16 of the Tennessee rules of criminal procedure due to the ongoing criminal investigation into the wildfire. This action has been coordinated with the Tennessee Attorney General’s Office.”

Fire Chief Miller said, “We believe there will be a significant opportunity to learn from this tragic fire once the after-action review is conducted. Until then, we have already realized the importance of mutual aid agreements. Tennessee has an excellent statewide fire mutual aid program. This enabled multiple resources to mobilize swiftly to offer aid to the city and Sevier County.”