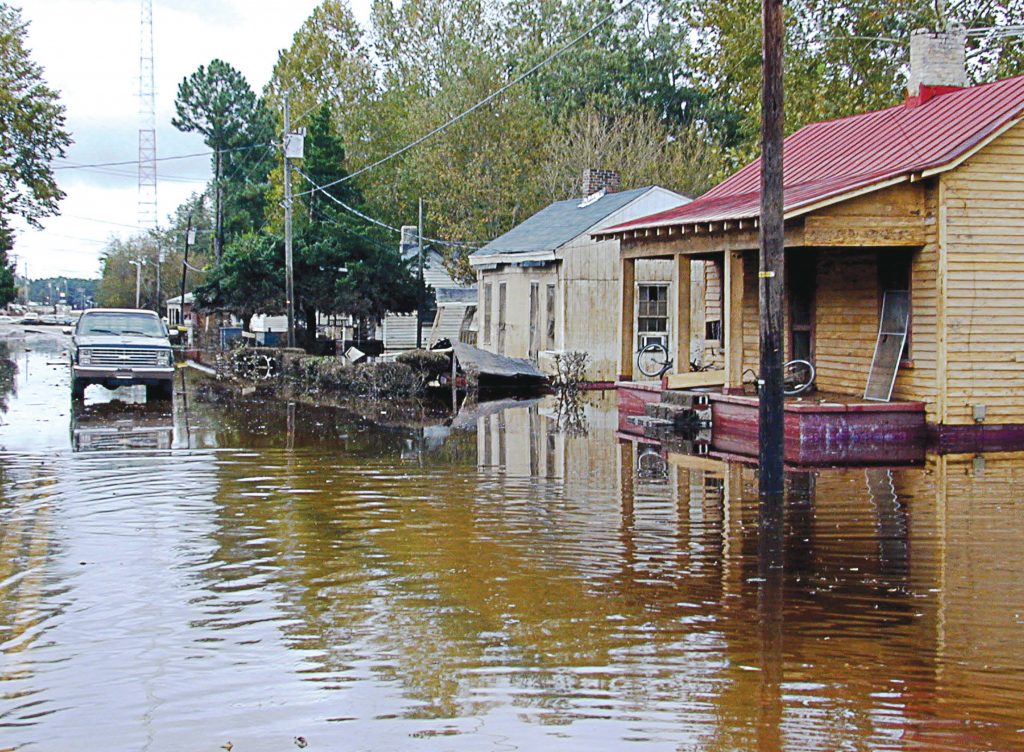 Princeville, N.C., was also impacted by Hurricane Floyd in 1999, pictured, with the resultant flooding of the Tar River forcing the evacuation of residents. (By Dave Saville/FEMA Photo Library via Wikimedia Commons)

When the floodwaters of Hurricane Matthew came ripping through Princeville, N.C., residents knew it would be bad, but they weren’t expecting what happened.

What was once a small but thriving town full of rich history situated along North Carolina’s Tar River is now a mere shell of what it used to be. Established by freed slaves and incorporated following the Civil War in 1885, Princeville has seen its fair share of natural disasters.

In 1999, Hurricane Floyd displaced 2.5 million residents in five coastal states — including North Carolina. Princeville residents were assured this would be a once-in-a-lifetime event, but that all changed in October 2016 when Hurricane Matthew swept through.

“The devastation is widespread,” Princeville Volunteer Fire Department Chief James Powell said. “Aside from the displacement of homes and families, the hurricane did a significant amount of infrastructure damage. Roads and drainage systems are wrecked. It completely wiped out the fi re department. We don’t have the capability of sustaining our operations without outside help.”

Powell, who has been a resident since 1998 and has served as fire chief since 2013, cited this as the worst he has ever seen the city. Homes have been abandoned or totally swept away, businesses are empty and daily life is a struggle.

During an interview with local news station WOSC-TV, Town Manager Daniel Gerald said 241 homes sustained major damage, while 229 others had less severe damage. In total, Princeville has about 750 homes housing about 2,200 people.

Hurricane Matthew completely wiped out Princeville Volunteer Fire Department, and now the department has launched a GoFundMe page in order to get back on its feet. The town requires a functioning fire department to really get recovery efforts underway. (GoFundMe.com)

Princeville residents, many of whom are still displaced, are now faced with three options from the Federal Emergency Management Agency: raise their current homes above the floodplain, if possible; rebuild their homes with raised structures; or accept a buyout deal that would deed the land to the local government with the agreement that no new structures would be built on the flood-prone terrain.

The city commission voted in December to allow residents to consider all three options, which Mayor Bobbie Jones worries will greatly impact the town.

The town has an annual budget of less than $1 million, and green space is untaxable, which means not only would the city be losing money on the open terrain, it would also have to man responsibility of the upkeep.

“Anytime you take away homes from a town the size of Princeville, it’s going to have a negative impact,” Jones said in a WOSC-TV interview.

While the concept of residents taking the buyout worries Mayor Jones, Powell is less concerned that will happen.

“Most of us are very hopeful and committed to restoring our homes,” he said. “We’re going to be positive. We’re not going to leave Princeville. This is our home. This is where we live, and we’re not leaving.” Rather, Powell said, his concern lies in how he is going to maintain a functioning fire department.

“I’m hopeful that the town will respond and come back, but there haven’t been any steps taken to get the fire department up and running,” he said. “Without fire protection in place, no crews can come in to restore power, work on homes, do anything, really. A fire department has to be in place. In order for the city to recover, we have to maintain fire protection.”

Princeville has never had its own fire department. The Princeville Volunteer Fire Department is a nonprofit corporation that simply contracts with the town, which provided the department with a building, but the fire department handled maintenance of equipment and personnel on its own.

“We’re in a unique situation,” Powell said. “FEMA will not build us a building because we didn’t own one, yet we spent all the capital operating budget on maintaining and fixing the old building. We’re out of money.”

In efforts to relocate the fire department to less flood-prone land, Powell has started a GoFundMe account, which considering the exposure it’s gotten, he said has done relatively well.

“Considering we don’t have a national stage, our fundraising is going well. We need to expand our story and get it out there so people know about it and can help, but our achilles heel is not having the national reach,” he said.

Rebuilding the fire department, dealing with hundreds of ruined homes, fixing infrastructure, breathing life back into the city… it seems like a tall order. But Mayor Jones said he won’t give up.

“I’m fighting so hard to make sure that Princeville is not one of the casualties,” he said in a December New York Times article. “It would be a devastating tragedy, not only for me, but for the world.”

For information on Princeville, visit townofprinceville.com. To donate to the rebuilding of the fi re department, visit its GoFundMe page here: http://bit.ly/2iTNqQo.