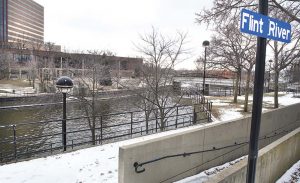 During a presentation in March, Flint, Mich., Mayor Karen Weaver pointed out her city’s water crisis could have happened anywhere in the U.S. — and infrastructure and water engineers tend to agree. (Shutterstock illustration and photo)

“It’s a geographic problem that is worse for older communities,” Hickmann said, noting it’s more an issue for cities on the East Coast and in the Midwest than cities on the West Coast. “In 2005, (Bend) still had woodstave pipes, but we got rid of them. We have different problems than lead pipes.”

Municipalities have barriers in place to prevent the leaching of lead into citizens’ homes. “What happened in Flint was that every safety barrier got crossed,” Hickmann stated. One such barrier was the sudden departure from adding orthophosphate, aft er the water source had been switched; that decision was made by the city’s state-appointed emergency manager.

“The real challenge is where the threat (of lead) is: on service lines, which extend from the main to the home,” he noted. Municipal governments typically aren’t responsible for funding repair or replacement of leaching service lines; rather, they assume responsibility only for the mains, which typically don’t contain lead — except for a few older systems that have lead joints. “Usually it is up to the homeowner to pay.”

To maintain the water system and businesses’ and residents’ service lines, orthophosphate is added to the water.

“Orthophosphate basically reacts with metal and other materials; it coats and prevents leaching,” LaBelle said, noting it takes about a year and a half to build up in the pipes.

When Flint switched to a more volatile water source — the Flint River — and ceased using orthophosphate, the protective coating gained during previous treatments was stripped away, allowing lead to leach.

“In general, when designing a water system, you want the highest quality of water — not just for health, but to decrease treatment cost,” Hickmann said.

Cities are required by the Environmental Protection Agency to regularly test for lead and other harmful chemicals, which maintains a list of chemicals that can’t go beyond certain caps.

“When we test in homes, we want the water to stay stagnant for about 12 hours,” LaBelle said. They then typically draw kitchen faucet water samples from randomly selected homes. “We target homes built before the era of 1986. Those homes are more apt to have lead.”

He noted homes are more likely to see traces of lead since the mains are constantly flowing and do not allow for stagnation. If a home or multiple homes test positive, the city can add in additional chemicals to target the lead or other undesirable chemicals.

“On the treatment side, first we’d adjust the pH to six and a half, seven and a half or to eight — sometimes higher than that,” LaBelle said. The higher the pH level the less acidic the water is, making it less corrosive. This is done by adding sodium carbonate.

From an operations standpoint, cities also regularly flush the lines.

“In our community we flush our hydrants, allowing that water to flow. We do that once a year and also test,” Hickmann said.

“There is little political will or desire to set aside money each year to replace aging systems,” he continued, noting oft en bandages are put in place. In insistences where a 50- or 100-year-old system is in use, local governments can get sticker shock when the bandages no longer work. “It’s a major investment that is surprising them — it shouldn’t.” He suggested municipalities routinely set aside 1 to 2 percent to cover such expenses. They should also complete critical analyses.

“Some pockets are far more vulnerable than others,” Hickmann said. This makes critical analysis all the more important to identify and then systemically address those vulnerable sections.

He noted, however, there are no standard asset management guidelines in the U.S.

“Many cities don’t know the size, age and type of material (of their pipes); or the information they have is questionable,” he said. “That makes critical analysis harder. You have to get the data.”

Once that data is in hand, cities can strategically and systematically address their water infrastructure needs while gaining a clear picture of the funds required to grapple with current problem areas — and plan for future concerns.