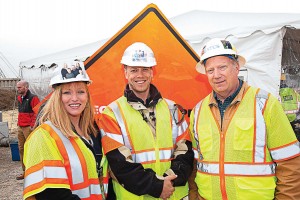 Street and highway workers Christiana Brganti-Dunn, Rick James and Paul Knighton gathered at the National Work Zone Awareness Week Kick Off event in Virginia in 2015. The event was hosted by the Virginia Department of Transportation. (Photo provided)

“Ask local leaders what are the conditions of their roads, and the majority will tell you that roads in their jurisdictions, having been built back in the ‘50s or ‘60s, are in need of improvement or repair.”

“There are more people traveling now than there were 50 years ago,” he said, relating the rise in roadway usage with the ever-increasing number of work zones. “Sometimes it seems like you can’t get in your car and go from point-A to point-B without some type of a flagging operation or lane closure. Twenty years ago you might see one work zone for every 50 miles you traveled. Now, today, here in the Washington, D.C., metropolitan area where I live, it’s more like every 10 miles,” he said. 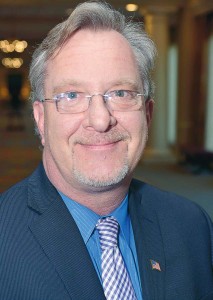 According to James Baron, director of communications with the American Traffic Safety Services Association, 15 years ago the issue of work zone awareness was nonexistent. A collaborative campaign has brought the attention of the media to the topic, however, and people are paying attention. (Photo provided)

ATSSA realized that there were serious safety problems with work zone safety back in the late 1990s when not only were there a high number of work zone-related fatalities, but seven out of 10 people killed were motorists. Those motorists were talking on cellphones, making illegal lane changes, driving drunk or driving when tired and hitting things.

“So we created a program back in 1999 called National Work Zone Awareness Week, designed to draw attention to roadway work zones. And you know, 20 years ago people didn’t know what an orange sign stood for. Now the average motorist knows that an orange sign means ‘construction zone.’”

Since the first work zone awareness campaign in April 2000, every state has adopted the idea of taking a week at the beginning of local road construction season to focus on work zone awareness and encourage drivers to slow down, pay attention to the orange signs, watch out for workers, not do distracting things in work zones and to stay safe.

“Fifteen years ago you would have heard nothing about work zones on the news, but now this collaborative safety awareness campaign has brought the attention of the media,” said Baron. “And people are paying attention.”

The effectiveness of the national safety awareness campaign proves out in numbers. Over a thousand people were killed nationwide in work zones in 1999, but in 2015 there were less than 600 deaths. Still, the overarching objective of the ATSSA is to get that number down to zero.

Baron credited the persistent work of many federal, state and local agencies with the accruing accomplishment. “It is because of what is happening locally in all 50 states,” he said. “All the DOTs, all the ATSSA chapter members, state and local law enforcement officers are who is making it happen,” he acknowledged.

“You see police officers and first responders now wearing orange vests, getting in tune with the hazards that exist whether it is in a work zone or emergency situation. You never used to see that before. But they realize the importance of being seen when you’re out on the roadway.” 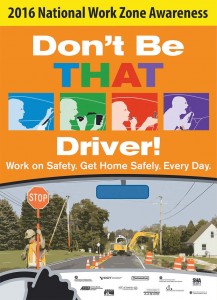 The 2016 Work Zone Awareness
Week poster. Copies can be ordered from www.atssa.com.

This year during National Work Zone Awareness Week, April 11–15, ATSSA is launching a new initiative so simple that every municipality across the country can do it at no cost. The Wednesday of that week, April 13, is designated ‘Go Orange Day,’ and the organization is encouraging everyone — not just road workers and law enforcement or emergency personnel, but mayors and police chiefs and motorists — to wear something orange to show that they support saving lives in work zones.

“So even if the mayor wears an orange tie that day, he’s done his part,” said Baron.

ATSSA started developing a collaborative safety campaign in December of 1999 and held the first National Work Zone Awareness Week event in April of 2000. A thousand orange highway cones were set up at the Washington Monument in D.C., which drew a crowd of people who were passing by and wanted to know what the reason was.

The successful event was replicated annually, with the location rotating between D.C., Virginia and Maryland through 2007, when the Federal Highway Administration voiced an opinion that it should occasionally be held outside of the D.C. metro area. Since then the kickoff of the national campaign has been hosted in Sacramento, Calif.; New York City, N.Y.; St. Louis, Mo.; Seattle, Wash.; and this year takes place in Toledo, Ohio.