Most communities have such a large number of dog owners that adopting dog-friendly legislation and going beyond the dog park in creating installations friendly to them stands to increase use of those spaces. (Shutterstock photos)

It’s estimated that more than a one-third of Americans own dogs. With the popularity of man’s best friend comes the need for municipalities to accommodate their needs. Knoxville, Tenn., and Carol Stream, Ill., are two cities that have gone the extra mile to make their facilities more dog friendly.

Knoxville is perhaps most synonymous with being dog friendly. In 2011 the city was named the southeast’s “DogTown USA” by Dog Fancy Magazine. According to a statement from the magazine, the city earned this distinction for several reasons:

“Not only can Knoxville boast many breed rescue groups, shelters and spay/neuter clinics, it is also on the cutting edge of veterinary and pet friendly practices. Home to one of the most prestigious veterinary programs in the nation, the University of Tennessee’s College of Veterinary Medicine is at the forefront of veterinary science and has created education classes for the public to ensure proper care for pets.

“Knoxville also hosts many pet friendly events such as Mardi Growl, Bark in the Park, Doggie Date Night and Yappy Hour. More and more of our restaurants welcome pets on their patios since a city ordinance was changed to allow dogs on restaurant patios in Knoxville.”

In terms of government involvement, the ordinance was a game changer. Since 2010 the city has allowed restaurants with outside dining areas, such as patios, to provide for dog owners to bring their dogs with them to those areas. Dogs cannot be taken through the inside area of the restaurant but must be taken directly to the outside dining area. Restaurants must obtain a permit to allow dogs and must post rules governing dogs in their place of business. The permit, which has a $20 application fee and does not have to be renewed, pertains only to pet dogs, not to service animals.

In addition to dog-friendly legislation, the city has invested significantly in its recreational assets. Case in point: Knoxville Parks and Recreation offers more than 45 miles of greenways and more than 80 parks for patrons to enjoy with their canine companions. 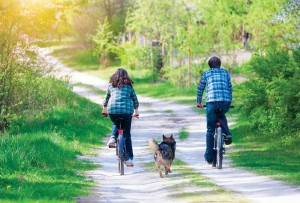 Carol Stream installed additional benches along its biking and walking paths to provide respite for both twolegged and four-legged patrons. It’s a common sight to see people jogging or biking with dogs in the warmer months. (Shutterstock photo)

However, her agency, which serves about 40,000 people in Chicago’s west suburbs, has made efforts to enhance facilities for dogs and their owners. For example, Mondlock said there are quite a few ponds in the area with walking paths along the perimeter that get heavy use. There are more benches along the paths, which provide respite for both dog and owner. It’s also a common sight to see people jogging or biking with dogs in the warmer months. Mondlock said these facilities benefit people and animals alike in terms of exercise and variety.

“It allows people to go further with their dog instead of going around the block everyday,” she said.

In addition to the public facilities, Mondlock added that the agency’s sponsorship of dog-friendly events has been a point of difference. However, it’s programming wasn’t always so robust. At first, dog-focused programs were limited to the occasional dog obedience class. But it became clear that dog owners are some of the most frequent users of the town’s park and trail systems, so it was necessary to better serve their needs. 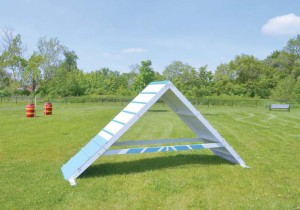 To that end, the district introduced the CSBarks Dog Festival, a free event in September that brings together the local canine community for activities like dog agility, dog Olympics contests and fashion shows. Over the past six years, as many as 2,000 dogs have flocked to the annual event, making it one of the largest free dog festivals in the region.

The dog festival was just the beginning. Its popularity has since led to the addition of several new dog-friendly programs, including dog Easter egg hunts, an outdoor movie screening with a dinner for dogs and a Halloween parade. The district also boasts a dog park, which features agility equipment and fake fire hydrants.