↓
Home→Guest Column→What does your city’s infrastructure say about your city? 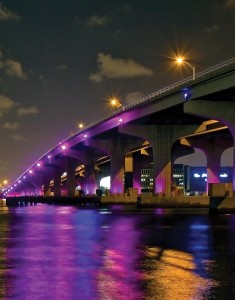 This photo of the MacArthur Causeway in Downtown Miami shows some of the colorful and artistic lights that have been added to Miami’s infrastructure. It was taken by Vice-Mayor Stephen Shelley in 2011 and connects the city to Watson Island and Miami Beach. Although it is not known for having the tallest or most skyscrapers, the Miami skyline is one of the most colorful and picturesque, providing great colorful reflections across Biscayne Bay on a calm night. The colors on many of the buildings change from night to night resulting in the ability to capture a fresh new image with each visit. Learn more about Shelley’s photography at www.stephenshelleyphotography.com.

One of government’s primary purposes, whether federal, state or local, is to provide basic infrastructure for its residents and businesses. Services such as water, sewer, electric and garbage collection, and brick-and-mortar structures like roadways, bridges and government buildings, are all necessary for the growth and development of modern cities. The majority of the United States population takes their infrastructure for granted until the power goes out or a pothole appears in their roadways. It is only then that they start to take notice of the infrastructure around them and ask the question, “to whom should I address my complaint?”

The city of Homestead was formed in 1913 in a region that, at the time, was remotely located more than 30 miles from any neighboring city or government center. As a result, Homestead owns and operates its own electric power plant, water and wastewater treatment plant, solid waste department, parks and rec department, public works and police department. Despite the fact that the city is now surrounded by development, they have consciously decided to embrace their history and remain self-sufficient, including expanding and improving facilities, rather than outsource these departments to a third party.

In contrast, Cutler Bay, a city that was formed in 2005, has chosen to outsource almost all of its infrastructure functions. Rather than manage hundreds of employees and invest in expensive buildings and machinery, their city has opted to manage contracts for services that are provided by the county or private companies. As a result, they are very lean and efficient and do not have as many of the facility and employee headaches that other older cities frequently experience.

Homestead’s infrastructure tells the story of its history and the pioneer spirit that the city was founded upon. Homestead’s original settlers were farmers and workers who helped build Henry Flagler’s East Coast Railroad. Cutler Bay’s infrastructure, on the other hand, follows the more modern trend of outsourcing historically government functions to private companies in an effort to stay nimble, be more efficient and reflect its youth.

Th e style of a city’s infrastructure can further help define a city. The city of Miami embarked on an ambitious project in 1989 to beautify the city’s skyline and turn it into a work of art. The concept was to use architectural lighting to decorate the city’s buildings, bridges and other infrastructure to make Miami’s skyline unique.

Today, the city of Miami’s skyline and bridges are one of the most picturesque in the country and feature a variety of different color and style of lights that reflect off the water of Biscayne Bay. These artistic lights also reflect the flamboyant Miami persona of the region that attracts 14.5 million tourists, artists and photographers to the area annually. Similar to the city of Miami, the city of Homestead is embarking on an effort to transform its historic downtown into a revitalized tourist destination and is using the power of infrastructure to lead the way.

The city of Homestead has committed more than 60 million dollars toward infrastructure projects in our historic downtown. The list of projects include construction of a 20,000-square-foot city hall, a new police station, a revitalized city-owned historic theatre, a new parking garage/retail center, an expanded and redesigned central park and a new pump station to serve future private development. Additionally, we are already in negotiations with a development group that is proposing to build an iconic attraction consisting of a 550-foot observation tower built on top of an Everglades-themed imax theater-styled ride. From the top of the tower, one will be able to see Everglades National Park, Biscayne National Park, Downtown Miami and the beginning of the Florida Keys.

Two years ago the city of Homestead branded itself as the Gateway to Everglades and Biscayne National Parks. More than 1.5 million visitors from all over the world visit these national parks annually. Homestead has partnered with Everglades and Biscayne National Parks in an effort to increase the number of visitors to the parks and in turn the economic impact to the city. Revitalization of the city’s downtown is part of this effort to make our downtown the central hub for persons visiting our national parks. The city already launched a free ranger guided trolley to both parks from our historic downtown last year.

These bold actions and investments in new infrastructure reflect a city with leaders who have a clear vision and are willing to take political risks to move their city forward. It also signals to private investors that the city has a plan and is willing to help create an environment in which all businesses can succeed.